Virat Kohli's century went in vain as Glenn Maxwell produced a sparkling 96 to help Australia defeat India by three wickets to take an unbeatable 3-0 lead in the series. 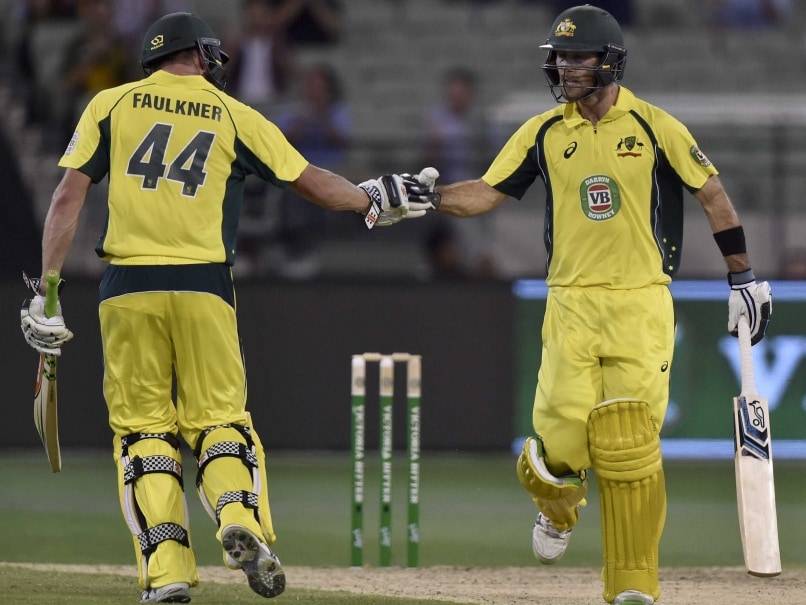 Glenn Maxwell smashed 96 off 83 balls and shared a crucial 80-run stand with James Faulkner to help Australia to an unbeatable 3-0 lead in the series.© AFP
Melbourne:

In reply, Australia never looked in trouble as they knocked off the required runs with 1.1 overs still remaining.

Glenn Maxwell put paid to India's hopes of an elusive win with a superlative 96 off 83 balls that had eight fours and three sixes as the bowlers once again undid the valiant effort from the batting unit. The fielding was also not upto the mark at times.

Aaron Finch (21 runs, 23 balls, 3 fours) and Shaun Marsh (62 runs, 76 balls, 6 fours) started off at almost six runs per over and the rate didn't come down even with early bowling changes.

Debutant Gurkeerat Singh Mann dropped Finch in the 6th over, with the batsman on 20. But it had yielded a wicket, with Finch caught behind in the 8th over off Ishant. Steve Smith (41 runs, 45 balls, 5 fours) then came to the crease and started off without feeling any pressure.

He added 64 runs with Marsh, who scored a second consecutive half-century playing in place of David Warner, and the 100-mark coming up breezily in the 16th over. Australia were keeping abreast of the run-rate, and Smith was into his forties in the blink of an eye.

Against the run of play then, in the 19th over, Ravindra Jadeja (2-49) got one to spin away from him, and he edged it to slip with Ajinkya Rahane happily accepting the catch. His dismissal brought India back into the game with George Bailey (23) stumped in the 27th over.

Dhoni showed another quick thinking and brilliant glove-work moment when he ran out Mitchell Marsh (17) off an Umesh Yadav (2-68) throw in the 36th over. In between, Shaun Marsh was out caught pulling off Ishant in the 30th over. And when Matthew Wade (6) holed out against the same bowler in the 39th over, Australia were reduced to 215/6.

But Maxwell then played a superb hand, with an uncharacteristic watchful innings to score his 13th ODI fifty. In doing so, he put on 80 runs off just 63 balls for the 7th wicket with James Faulkner (21) and over by over, the hosts edged home to a win.

Comments
Topics mentioned in this article
Australia Cricket Team India Cricket Team Gurkeerat Singh Rishi Dhawan Mitchell Marsh Cricket Glenn Maxwell James Faulkner
Get the latest updates on IND vs NZ 2021, check out the Schedule and Live Score . Like us on Facebook or follow us on Twitter for more sports updates. You can also download the NDTV Cricket app for Android or iOS.