Russell smashed 72 runs off 24 balls in their 6IXTY tournament clash, helping his side claim a three-run victory 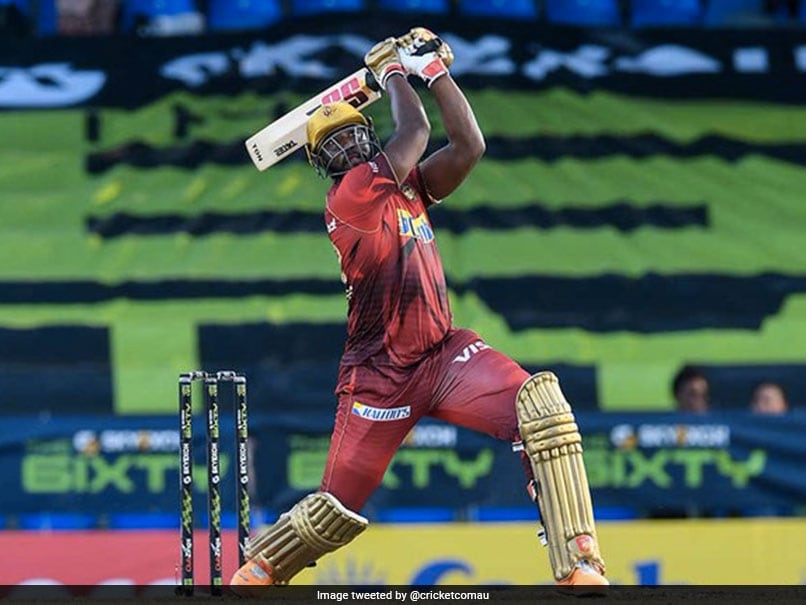 West Indies all-rounder Andre Russell, who is known for his powerful hitting, proved his worth once again on Saturday. During the clash against St Kitts and Nevis Patriots, Trinbago Knight Riders' Russell smashed 72 runs off 24 balls in their 6IXTY tournament clash, helping his side claim a three-run victory. The main highlight of the night was when the Caribbean all-rounder smashed six sixes in a row and completely turned the tide of the game into TKR's favour. Put to bat first, TKR made the most out of the given opportunity and left no stone unturned to put up a big score on the board.

In the 7th over which was bowled by Dominic Drakes, Russell smashed the first six on the third delivery and also sent the next three deliveries for the same result and brought up his half-century in just 17 balls. In the 8th over, when Jon-Russ Jaggesar came to bowl, Russell showed no mercy to him and hit sixes on his first balls to complete his six sixes. He then went on hit a boundary on the third ball. St Kitts finally took a sigh a relief when Russell got caught by Duan Jansen on the last ball of the over.

In the 6IXTY, every batting team has six wickets in place ten in the other formats and the batting teams can "unlock" a floating third powerplay over by hitting two sixes in the initial two-over powerplay. Teams will bowl five consecutive overs without changing an end. There will be no switching of ends after each over.

If teams fail to bowl their 10 overs within 45 minutes, a fielder will be removed for the final six balls.

"It's just about trying to generate excitement and interest. It's like what's going on with golf right now - you have to look at things through a different lens sometimes. This is about a totally new audience. We're very much going after the younger generation," CPL CEO Pete Russell was quoted as telling ESPNcricinfo.

"Our plan is to do four a year, that's the starting point. Potentially, you'd like to have three in the Caribbean and one elsewhere. We'd like to play one internationally somewhere: if I could take the 6ixty to Vegas, that would be a dream ticket," he added.

Andre Russell Cricket
Get the latest updates on Fifa Worldcup 2022 and check out  Fifa World Cup Schedule, Stats and Live Cricket Score. Like us on Facebook or follow us on Twitter for more sports updates. You can also download the NDTV Cricket app for Android or iOS.