A Letter To Junior Sehwag 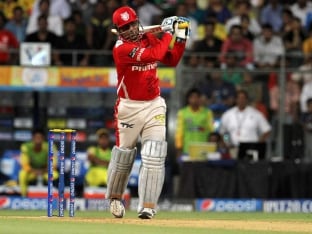 Son, did you know, no Indian had ever scored a triple century before your father reached that milestone in 2004? In fact, no Indian has still managed to score a triple ton while your dad has two. Allow me to take you back in time, to when, the IPL wasn't born and neither had the idea to have Aryavir been born inside your parents' heads.

After his sensational hundred against CSK, Sehwag suggested he was motivated by jibes from his son's schoolmates.

Hope you are well. I bet you enjoyed watching dad, just as I did, play one of the best innings of IPL 7. How was school the following day? Did you feel all smug after the same school mates who teased you about your dad's poor run of form congratulated you on his super knock? I'm sure you did.

Now before you get back to doing your homework, please spare a couple of minutes to read my letter. I promise to make it more fun then your math class.

Son, did you know, no Indian had ever scored a triple century before your father reached that milestone in 2004? In fact, no Indian has still managed to score a triple ton while your dad has two. Allow me to take you back in time, to when, the IPL wasn't born and neither had the idea to have Aryavir been born inside your parents' heads.

It's not often that uncle Sachin scores a century and someone else grabs the headline. But your dad managed it on a late summer afternoon, ten years ago. He hit 6 sixes in the course of his 375 ball innings against Pakistan in Multan, 2 less than what he managed against CSK last week in the IPL, but each of those 8 sixes pale in comparison to the sheer audacity of the six he hit to reach 300; bordering on impudence and fearlessness. My favourite shot on the day though was a square cut he played against the spin, and off, arguably the best off-spinner ever- Saqlain Mushtaq. Maybe now would also be a good time to tell you that uncle Nehra and uncle Ashwin, who bowled to Daddy in the IPL, aren't a patch on Messrs Shoaib & Saqlain who bowled to him in the Multan test 10 years ago.

In fact both uncle Ashwin & Nehra, with a white ball in their hands and small boundaries to defend, are just about as threatening as the pet Golden Retriever that you have in your house. But put a red ball in the hands of Dale Steyn, Morne Morkel & Makhaya Ntini and you get the German Shepheard that uncle Dhoni owns-aggressive & ferocious! That's exactly what your dad was up against in March 2008 in Chennai. He smashed a six off Ntini in the very first over he faced, and 273 balls later, he became only the 4th batsman in the history of the game to score two triple hundreds. Those who question his footwork, or the lack of it, must watch this knock. While left arm spinner Paul Harris continued to bowl in the rough, your dad put paid to his plans by using his feet and playing cover drives after cover drives for four.

His triple tons aside, my favourite Virender Sehwag knocks remains the one he played in November of 2001 vs South Africa in Bloemfontein. Yes, Uncle Azhar had a great debut. Uncles Sourav & Rahul too played very impressive knocks on debut. But, your father's debut wasn't a great knock, it was a statement that read - Virender Sehwag has arrived!! On a pacy Bloemfontein wicket, against the likes of Shaun Pollock and Makhaya Ntini, he scored 105. India were struggling at 68/4 when he walked in, and when he got out, the scorecard read a respectable 351/6.

Add his 195 in 2003 vs Australia on a fast Melbourne pitch and the 293 vs Sri Lanka on a spin friendly Braboune track and there are more sweet memories there than a truck full of your favourite candy bar.

And son, just in case, Test cricket is not your thing and cricket in cloured clothes is what you fancy, then remember that the record for the highest individual score in ODI cricket also belongs to your father.

Please do share this letter with all your school friends, or better still, since they belong to the new-age internet generation, ask them to search for these knocks on YouTube. Trust me, they'll never tease you again.

As for you mister, I wish you knew what place your dad holds in the annals of cricket, because then, an IPL 100 would have meant nothing to you.

Comments
Topics mentioned in this article
Cricket Virender Sehwag
Get the latest updates on Fifa Worldcup 2022 and check out  Fifa World Cup Schedule, Stats and Live Cricket Score. Like us on Facebook or follow us on Twitter for more sports updates. You can also download the NDTV Cricket app for Android or iOS.