A persistent Pakistan scored a last-minute equaliser against India in men's hockey Pool B match. 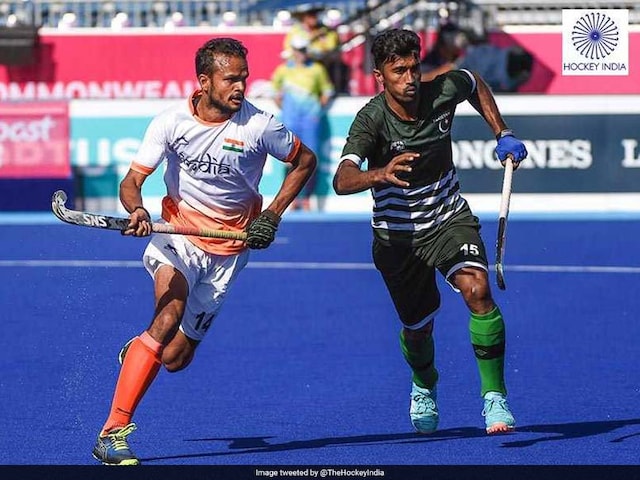 India were held to a 2-2 draw by arch-rivals Pakistan in the men's hockey pool B match on Saturday. India put in a dominant performance in the first two quarters, holding a two-goal advantage at half-time. However, complacency seemed to kick in and that allowed Pakistan back into the match. Pakistan put India under tremendous pressure in the second half and Mohammed Irfan Jr reduced the arrears with a 38th minute field goal. PR Sreejesh produced some brilliant saves to keep India's one-goal lead intact, however, with just seconds left there was high drama. Pakistan called for a video referral with 7 seconds left, earning themselves a penalty corner and again benefited in the dying moments with yet another referral. Mubashar Ali was at hand to score from the penalty corner for Pakistan, leaving the Indian team shell-shocked.

On the field, India dominated quite clearly despite being a bit sloppy themselves. Forward Dilpreet opened the scoring in the first quarter, helping the last edition silver-medallists end the first 15 minutes with a 1-0 lead.

In the second quarter, Harmanpreet Singh converted the second of the two penalty corner chances he got to put India in control.

Pakistan managed to earn a couple of penalty corners of their own but veteran P Sreejesh guarded his citadel with his wonder saves.

The Indians were clearly the superior outfit as far as controlling the ball was concerned, hoodwinking their rivals quite comfortably.

The competitive edge missing from their game, the Pakistani team was also subdued in its on-field demeanour until forward Mohammed Irfan Junior put them on the scoring board with a field goal in the third quarter, narrowing the gap between the two sides.

The goal was initially in the name of Muhammad Arslan Qadir but Irfan Junior's faint touch was discovered during replays, prompting a revised credit.

Pakistan turned on the intensity in the final 15 minutes and were rewarded with three back-to-back penalty corners. But they just could not slot the all-important equaliser, denied by a solid Sreejesh and their own poor shots at the goal.

Mandeep Singh had the chance to increase India's lead in the dying minutes of the match but his shot was deflected.

With seven seconds left on the clock, Pakistan earned a penalty corner, causing some anxiety in the Indian camp, and the old fears turned out to be true.

The Indians ended up conceding one to let slip what should have been a comfortable win.

Comments
Topics mentioned in this article
India Pakistan Hockey CWG 2018
Get the latest Cricket news, check out the India cricket schedule, Cricket live score . Like us on Facebook or follow us on Twitter for more sports updates. You can also download the NDTV Cricket app for Android or iOS.