Undeterred by niggles and lack of proper physiotherapic care, Indian weightlifters delivered two more gold medals for the country today, while shuttlers and boxers remained unbeaten to make up for the hockey team's sloppy draw against Pakistan on day 3 of the 21st Commonwealth Games at the Gold Coast on Saturday. India now have four gold, a silver and a bronze in the event, leaving them fourth on the overall tally. Hosts Australia top the charts with a whopping 57 medals -- 20 gold, 17 silver and 20 bronze. India's two gold medals today came through Sathish Sivalingam (77kg) and Venkat Rahul Ragala (85kg), both of whom were not 100 percent fit owing to a respective thigh and knee injuries but still managed to keep ahead of the competition. (Medals Tally)

#TeamEngland was dominant throughout their Men's Preliminary Round fixture against #TeamIndia! India scored 54 to England's total of 100 in their second loss of the Group stage! #TeamIndia will now face #TeamScotland in their final Pool B appearance! #GoodLuck boys.. #GC2018 pic.twitter.com/NjAA4a0oiy

18:15 IST: Manjeet Singh competed in the Men's 15km Scratch Race in #GC2018CyclingTrack Event but could not qualify for the Finals!

17:40 IST: The trio of Sanuraj Sanandaraj, Ranjit Singh & Sahil Kumar completed their Men's Sprint Qualifying Event but could not qualify for the next phase.

16:53 IST: Boxer Manoj Kumar is through to QF of Men's 69 kg category with a win over Tanzania's Kassim Mbundwike.

16:40 IST: India's swimmer Srihari Natraj finishes 5th in Semis (Heat 2) of 50m Backstroke with the timing of 26.50s; Finished 9th overall. Kept as the 1st reserve as top 8 qualify for the Final tomorrow.

!!#VenkatRahulRagala of #TeamIndia lifts a total of 338kgs in the Men's 85kg #GC2018Weightlifting to earn yet another Gold Medal for India in #Weightlifting! #Congratulations Champ! pic.twitter.com/sijEzY81Fa

15:46 IST: In Boxing, India's Hussamuddin Mohammed beats Boe Warawara of Vanuatu in Men's 56kg Round of 16

15:40 IST: India lose 72-85 to Malaysia in Women's Preliminary Round Pool B Basketball match.

15:30 IST: In Boxing, India's Hussamuddin Mohammed takes on Boe Warawara of Vanuatu in Men's 56kg Round of 16

14:27 IST: In Basketball, women's Preliminary Round Pool B, India are currently leading Malaysia 27-26.

14:20 IST: India's Venkat Rahul Ragala is in action in men's 85kg weightlifting. Can India get another weightlifting medal?

14:15 IST: India's Sarita Devi is through to the semis of the women's 60 kg boxing. She beat Kimberly Gittens of Barbados.

14:10 IST: While the Indian men's basketball team is trailing England 65-26, the Indian women's team is up against Malaysia in the Women Preliminary Round Pool B.

14:00 IST: In Boxing, women's 60kg Round of 16 match between Sarita Devi and Kimberly Gitten commences.

13:26 IST: Indian gymnasts Pranati Das and Aruna Budda Reddy are not faring too well in the women's Individual All-Around Final. The Indian duo are currently in 17th and 18th place after participating in Uneven Bars and Balance Beam

13:22 IST: England are leading India 19-15 in the men's basketball Preliminary Round Pool B.

13:16 IST: In Basketball, India are currently trailing England 12-11 in men's Preliminary Round Pool B.

11:40 IST: Unlucky for India! They dominated the first two quarters but seemed to take the foot off the pedal in the final two quarters. Pakistan equalised with literally the last play of the match.

59' GOAL! Pakistan score from the set-piece to salvage a draw at the last moment.

11:37 IST: GOAL! Pakistan score an equaliser in the last second of the game to draw the match. While Pakistan are celebrating, India are in stunned.

11:30 IST: Last minutes drama as Pakistan get a penalty corner with just seconds left on the clock. Can they equalise?!

11:28 IST: Two minutes left in the game and India miss a simple chance to extend their lead.

11:25 IST: Meanwhile in the women's weightlifting 63kg final, India's Vandna Gupta fails to successfully lift 104kg in her third clean and jerk attempt, finishes with a combined total of 180kg.

11:20 IST: PR Sreejesh makes two brilliant acrobatic saves to keep India's lead intact. He has been the hero for India till now.

52' SAVE! @16Sreejesh predictably brilliant with some acrobatic saves to deny Pakistan.

38' GOAL! Pakistan pull one back through Irfan Jr. and reduce the deficit to 1 goal.

33' PC to India and @rupinderbob3's shot is stopped by a rushing defense.

10:44 IST: India maintain their 2-0 goal lead against Pakistan at half-time. Dilpreet Singh and Harmanpreet Singh scored for India in quarter one and quarter two respectively.

HT. India score in both quarters and show resolve in defense to take a strong lead to the second half in their opening game of the @GC2018 XXI Commonwealth Games against Pakistan on 7th April.#IndiaKaGame #HallaHockeyKa #GC2018 #INDvPAK pic.twitter.com/qlcNgcoB7s

10:40 IST: SAVE!! Sreejesh makes a wonder save as he dives to his right to push the ball away off a Pakistan penalty corner rebound.

26' PC to Pakistan and @16Sreejesh pulls off a brilliant save leaping to his right to keep out the ball.

10:33 IST: India are putting up a dominating performance as they are not allowing Pakistan to stay in their own half.

19' GOAL! PC to India once again and @13harmanpreet makes no mistake from the set-piece for India's second of the game.

10:18 IST: India receive a penalty corner just right after the goal but fail to convert it.

14' PC to India and the attempt from @rupinderbob3 goes just above the frame of goal. India lead by one close to the end of Q1.

10:17 IST: GOAL!! India take the lead as Dilpreet Singh scores off a SV Sunil cross in the 13th minute.

10:12 IST: India are repeatedly making insertions into Pakistan's half.

10:10 IST: Meanwhile you can have a sneak peek into how the CWG prize medal boxes are made.

Get up close and personal with our #GC2018 prize medal boxes! Designed and produced on the Gold Coast, we think they're pretty special. #SHARETHEDREAM pic.twitter.com/4jNuuK6oI0

10:08 IST: Both teams are off to a solid start as they have penetrated each other couple of times already.

5' India is making repeated forays into Pakistan's half, looking for the opening goal.

Here is the Starting XI of the Indian Men's Hockey Team that will take on Pakistan in their highly anticipated encounter of the @GC2018 2018 XXI Commonwealth Games on 7th April 2018. #IndiaKaGame #HallaHockeyKa #INDvPAK #GC2018 pic.twitter.com/MfiDk149cD

09:45 IST: We are minutes away from the all-important India vs Pakistan Pool B  Hockey match. Can the Indian men's hockey team get it's Gold Coast Games campaign off to a winning start?

08:50 IST: The pair of Sathiyan Gnanasekaran and Harmeet Desai beats Javen Choong and Chee Feng Leong of Malaysia 11-7, 11-6, 11-7 in the third match of the quarter-final tie to book India's berth in the semi-final of the Table Tennis men's team event.

08:20 IST: India's Sajan Prakash qualified for the final of swimming men's 200m Butterfly, while Srihari Nataraj advanced to the semi-final of the men's 50m Backstroke.

07:45 IST: The Indian men's team are currently in action against Malaysia in table tennis team quarterfinal. Can they emulate their female counterpart's result? 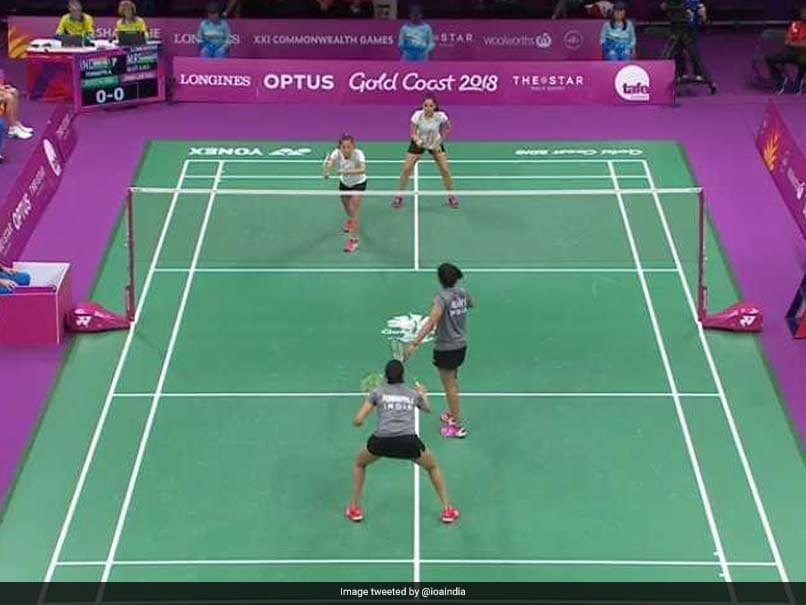 07:36 IST: Earlier in the day, India beat Malaysia 3-0 in women's table tennis team quarterfinal and advanced to the semi-finals of the event.

07:31 IST: India win yet another weightlifting gold as Sathish Sivalingam finishes with a total of 317 kg in men's 77 kg category. What a tournament it has been till now for the Indian weightlifters.

Looks like a Good Morning already for #TeamIndia! It appears @sathy732 is bringing back home a Gold from #GC2018 #GC2018Weightlifting Men's 77kg!!!#GoldQuest in #GoldCoast for India at @GC2018 #CommonwealthGames #SHARETHEDREAM

07:20 IST: Sathish Sivalingam successfully lifts 173 kg in his second Clean and Jerk attempt to take India closer to yet another weightlifting gold.

07:00 IST: Hello and welcome to the live blog of Day 3 of the Commonwealth Games

The only disappointment in the weightlifting arena was Saraswati Rout in the women's 58kg category. She failed to complete a single valid lift in the snatch section and was disqualified from clean and jerk as a result. There were several other good results to celebrate for India though, a prominent one being the women's hockey team bringing its campaign back on track with a 4-1 thrashing of Malaysia. The triumph helped the side recover from the shocking 2-3 loss to a lower-ranked Wales in the tournament-opener. The Indians continued to be the big bullies of the badminton court, dismantling Scotland today to top their mixed team event group and advance to the quarterfinals. Saina Nehwal was in rampaging form and took down Julie Macpherson in just 36 minutes during the mostly one-sided contest which India won 5-0.

In the boxing ring, CWG debutants Amit Panghal (49kg) and Naman Tanwar (91kg) were hardly pushed as they recorded unanimous victories to enter the last-eight stage. On the squash court, Joshna Chinnappa entered the quarterfinals with a 3-0 win over Australia's Tamika Saxby. The day was, however, not without its fair share of disappointments, a big win among them being Dipika Pallikal in the women's singles squash competition. She went down to England's Alison Waters 0-3 in her pre-quarterfinal match. Former Asian gold-medallist Deborah Herold made the final heat of the women's sprint event in cycling but lost to Australian Kaarle McCulloch to bow out of medal contention.

Diwali 2019: Sportspersons From Around The World Greet Fans On Diwali