There is Firm Offer From Sochi for World Championship: Viswanathan Anand

Viswanathan Anand said the officials in the world body FIDE were trying to include chess in the Olympic Games but he did not know what the current status of this move was. 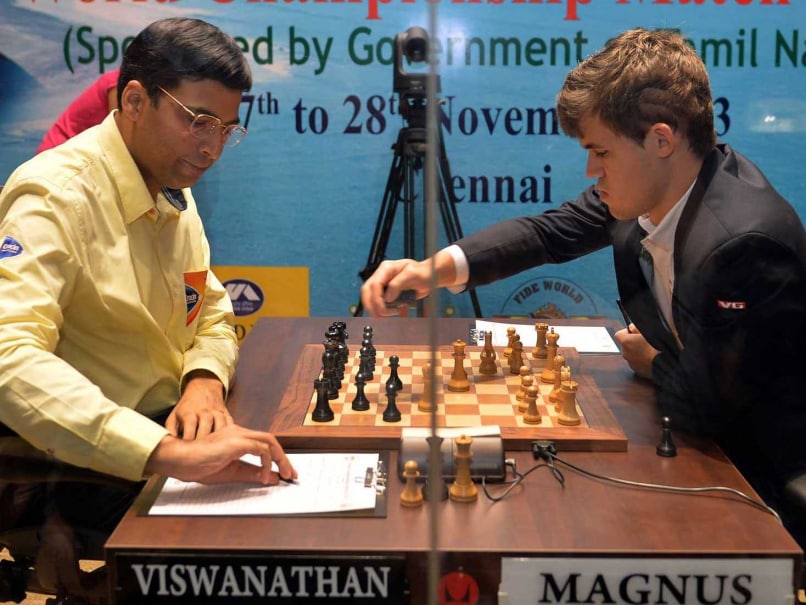 Vishwanathan Anand and Magnus Carlsen during a match.© AFP
Mumbai:

Amid apprehension that the World Chess Championship title contest between reigning champion Magnus Carlsen and former winner Vishwanathan Anand could be postponed, the Indian ace is hoping the rematch would go ahead and be held in Sochi, Russia, in November.

"At the moment we have a firm offer from Sochi and this (former champion Gary Kasparov's comment) is probably just part of the last minute campaigning rather than anything else," Anand told PTI in an interview here on Saturday.

The five-time world champion was referring to the upcoming contest between Kasparov and incumbent president of world chess body, Kirsan Ilyumzhinov, for gaining control of FIDE at its elections scheduled in Norway on August 11.

"The only thing pending is the result of the election. At the moment everything seems set. We do have a firm offer from Sochi and the contract is there, everything is there," the five-time world champion and former world number one said.

Kasparov stated recently that if elected as the new FIDE president, the championship rematch would be held not earlier than March, 2015, citing lack of sponsors.

FIDE had earlier announced that Sochi has offered to host the championship, tentatively scheduled from November 7-26.

Anand said things would get clearer after the FIDE elections though he has started training for the event if it's held in November.

"Anyway, FIDE election happens in two days, so everything is kind of hanging in the air till that. Only two days are left and a lot of things will get clear after the FIDE elections."

Anand was satisfied about his preparation for the tough rematch against Carlsen, for which he qualified by winning the Candidates Tournament title earlier this year.

"I am happy that I am on a short break and I will train again a bit. I would play in Bilbau in September and then will play some Rapids (in Geneva) in October. Hope to be ready for the World Championship after playing in Bilbao and Rapids," he said.

Anand said his approach this time would be different to the one he adopted in Chennai last November when Norwegian world number one Carlsen dethroned him, but refused to elaborate.

"It goes without saying (of adopting a different approach). Well, I don't see much sense in doing that (elaborate). I will demonstrate it at the board," he said.

"I have some ideas and I have tried to fix them, but to be honest I don't want to discuss last time again. Things just went wrong. Let's leave it at that," he said with a smile.

"I felt very confident after Candidates victory and would like to carry it forward (into the World Championship title match)," he emphasised.

While agreeing with Kasparov's view that the world title match should be held biannually, Anand pointed out it's being held annually as per the current calendar of events.

"On a broader point I also think two years cycle is much better, but right now this is the official calendar. Earlier we were sticking to the two-year calendar... in 2008, 2010, 2012. I don't know why it changed. That's for another discussion," he said.

He did not like comparing the styles of Kasparov, with whom he has contested for the world crown, and Carlsen.

"It's impossible to compare people so many years apart (as players). His (Carlsen's) style is very different. Gary's style was much more narrow than his. It's very hard to compare these things."

Asked whether the upcoming World Championship would be his last attempt, Anand refused to look too far ahead.

"You know how it works. If I win then it will not. I am not thinking too much about where this comes in my career or what it means to my career.

"It's simply a second chance and I am going to try to use it the best way I can. I am not sitting and thinking where this fits in my remaining World Championship attempts or things like that," he said, again with a smile.

Named as brand ambassador of the World Junior Championship to be held in Pune from October 5-20, Anand said it will give a major boost to the game of 64 squares.

"It will be a very very big chess event that is being held in Maharashtra, in Pune. Pune has got a lot of chess activity, lot of youngsters academies and those kinds of things. Something like the World Junior Championship will be a big boost to chess and it's a very prestigious event.

"If you remember earlier, the connection was always the world juniors as it was where people were trying to spot the next world champion. People like (Boris) Spassky, (Anatoly) Karpov, Kasparov and myself... we were all world junior champions and then became world champions. I think it will be fantastic."

Anand said the officials in the world body FIDE were trying to include chess in the Olympic Games but he did not know what the current status of this move was.

"I think they (FIDE officials) are trying to get (chess) into the Olympics but I don't know the status. It has a natural place (in the Olympics)."

According to Anand, henceforth the game of chess will not be dominated by a single country like the erstwhile Soviet Union had done in the past.

"From now on no single country will dominate chess. We will not see the sort of domination that the former Soviet Union used to have in chess. It will not happen again. It's because of the way chess is developing," he explained.