Watch: Tai Tzu Ying's Sensational "Behind The Back" Shot Against PV Sindhu At Malaysia Open 2022

PV Sindhu suffered her sixth straight defeat to Tai Tzu Ying with the recent loss at Malaysia Open 2022 on Friday. 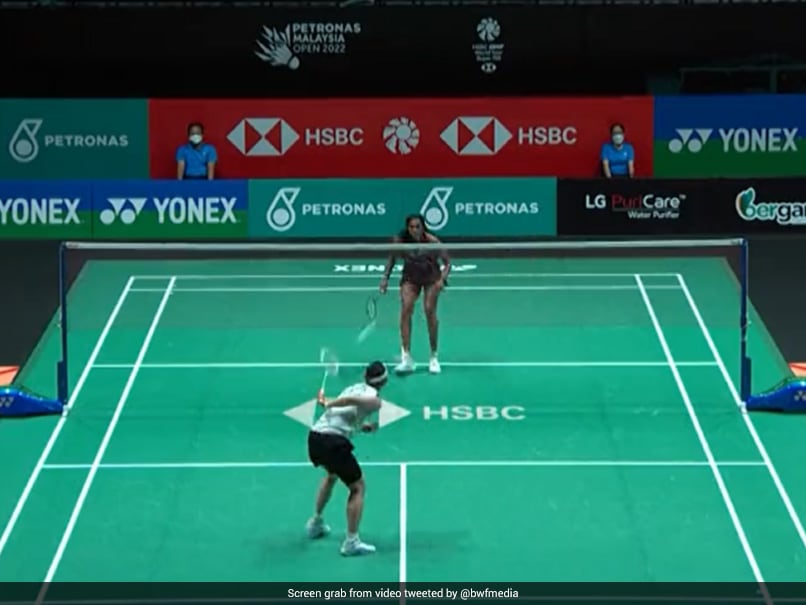 Tai Tzu Ying playing "behind the back" shot against PV Sindhu at Malaysia Open 2022.© Twitter

PV Sindhu bowed out of the Malaysia Open 2022 after losing to World No.2 Tai Tzu Ying in closely-fought women's singles match on Friday. The Indian star lost 21-13, 15-21, 13-21 in a match lasting 53 minutes. This was Sindhu's sixth straight defeat to the Chinese Taipei shuttler, who will China's Chen Yu Fei for a place in the final. Having won the first game, Sindhu couldn't sustain the high pressure as Tai Tzu Ying, after making numerous unforced errors in the opening game, upped the ante. The duo had quite a few edge-of-the-seat rally.

One particular one, with Tai Tzu Ying on match point, has gone viral on Twitter. Sindhu played some forceful shots to put the Chinese Taipei player on the back foot. Sindhu then went for the kill but Tai Tzu Ying made a stunning behind-the-back save catching Sindhu completely off guard.

Sindhu still managed to hit a shot deep but Tai Tzu Ying produced a fine backhand shot to stay in the point. In the end, Sindhu tried to catch the line in the next shot but it ended up going wide as Tai Tzu claimed another win over the Indian.

Watch: Tai Tzu Ying's sensational "behind the back" shot against PV Sindhu at Malaysia Open 2022

By virtue of the win, the Chinese Taipei shuttler extended her domination over the Indian ace, leading 16-5 on head-to-head record.

The other Indian left in the fray, HS Prannoy too tasted defeat, thereby bringing an end to the country's campaign in the tournament.

PV Sindhu
Get the latest updates on ICC T20 Worldcup 2022 and CWG 2022 check out the Schedule, Live Score and Medals Tally. Like us on Facebook or follow us on Twitter for more sports updates. You can also download the NDTV Cricket app for Android or iOS.