This is the first time that Sindhu advanced to the semi-final round of the tournament. 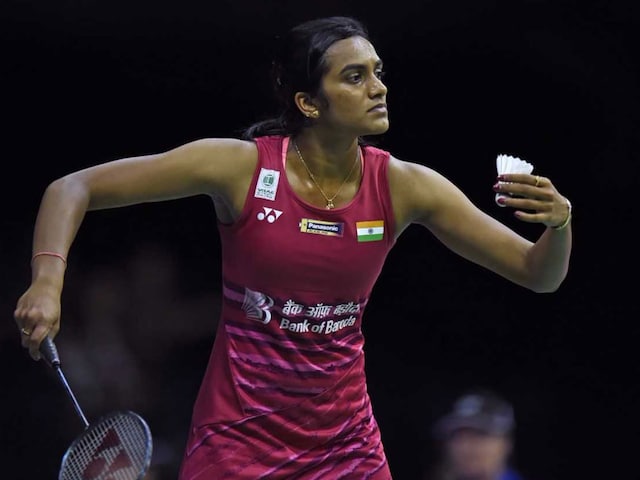 PV Sindhu defeated her opponent in 41 minutes to enter into semis of French Open.© AFP

India's PV Sindhu breezed past her opponent Chen Yufei of China to enter the women's singles semi-final at the French Open Super Series on Friday. Sindhu dominated the proceedings as she beat her opponent 21-14, 21-14 in a match that lasted 41 minutes. This is the first time that Sindhu has reached the semi-finals of this tournament. By virtue of this win, the Indian avenged her opening round loss to the Chinese at the Denmark Open last week. After five head-to-head meetings, Sindhu leads Chen Yufei 3-2. Meanwhile, there was more good news for the Indian contingent as HS Prannoy comfortably got the better of Jeon Hyeok Jin of South Korea, in straight games, to advance to the men's singles semis.

Sindhu was in her element as she used her long reach and court coverage to flummox her opponent and get the better of her with consummate ease. Yufei did not look her best as she was undone by numerous unforced errors.

Sindhu, seeded second, always enjoyed the upper hand in the duel, except for the first 10 points of the opening game where it was the neck-and-neck battle between the duo. But once she surged ahead 12-10, there was no looking back as Sindhu controlled the game from there on with deft drop shots and down the line and cross court smashes to race to an 18-12 lead.

Yufei managed to grab two points but unforced errors cost her dearly as she pushed a drop shot wide to hand the Indian the first game in 19 minutes.

Sindhu, however, was slow to get off the blocks in the second game as Yufei took a 3-0 lead.

But the Indian managed to claw her way back, courtesy unforced errors from the Chinese to draw level at 5-5. From there on, Sindhu controlled the proceedings, except for a few unforced errors in between, to take an 11-7 lead at the break.

The Indian then managed to hold to her lead and pocketed the second game in 22 minutes to wrap up the issue. Sindhu will next play the winner of another quarter-final between third seed Sung Ji Hyun of Korea and Japanese fifth seed Akane Yamaguchi tomorrow.

In the other match, Prannoy defeated Jeon Hyeok Jin 21-16, 21-16 to enter the men's singles semi-final round. Prannoy dominated the first game of the match as he had a comfortable, holding a comfortable lead throughout.

In the second game, Hyeok Jin upped his game and caused the Indian some problems. However, Prannoy managed to overcome the difficult period to clinch the second game and the match, which lasted 47 minutes.

Meanwhile, Kidambi Srikanth who won the Denmark Open last week, also made it to the semi-final as he got the better of his Chinese opponent Shi Yuqi in a match that lasted a little more than an hour. Sri Kanth lost the first game 8-21 but came back strongly in the second game by winning it 21-19. From there on, there was no looking back for the Indian, as Srikanth dominated the last game and won it convincingly (21-9) to book his place in the semis.

Srikanth will face compatriot Prannoy on Saturday for a spot in the final.