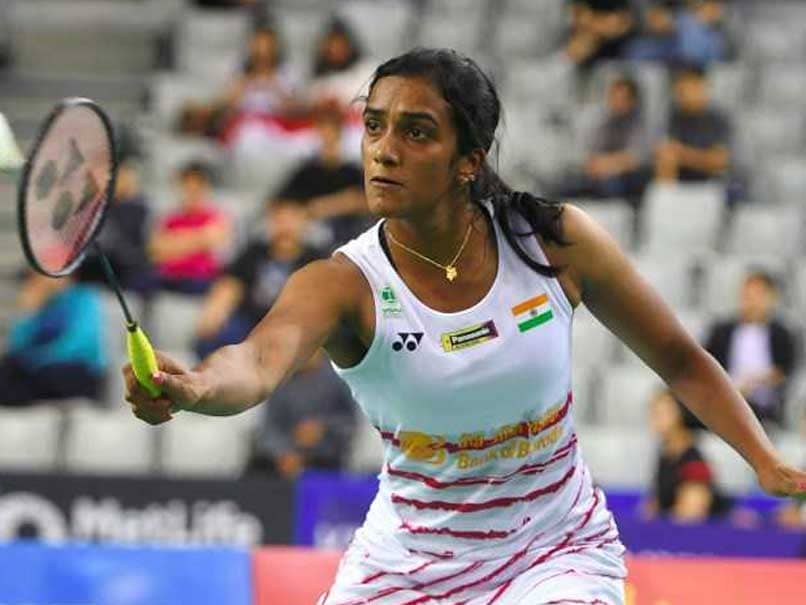 PV Sindhu defeated Japan's Akane Yamaguchi in straight games to enter the finals of the World Championships 2018. In the match that lasted for 55 minutes Sindhu defeated the world number three Yamaguchi, 21-16, 24-22. After starting from behind, Sindhu gained her rhythm, and won the first game comfortably 21-16. In the second game, Yamaguchi kept a tidy lead from the start. At one stage, Sindhu was trailing 12-19 but displayed a brilliant play of badminton, leveling the scores with straight 8-points win. Sindhu will now face Carolina Marin on Sunday in the finals.

19:26 IST: Third match point opportunity for Sindhu as Yamaguchi fails to land her smash inside the line

19:24 IST: Beautiful smash from Yamaguchi to level the scores again. It's 22 all in the second game now.

19:22 IST: Game point opportunity for Yamaguchi and she makes a blunder. Really bad serve from the Japanese. 21 all at the moment

19:19 IST: Seven straight point from Sindhu. Scores are level now. 19 all in the second game.

19:15 IST: Sindhu finally wins the serve back. Yamaguchi was taking the game away from her. Sindhu 13-19 Yamaguchi

19:14 IST: Brilliant from Yamaguchi. Deft touch from the Japanese. Sindhu had no chance. Sindhu 12-17 Yamaguchi

19:11 IST: Finally that rally came to an end. That was by far the longest rally of the match. Sindhu wins the point. Sindhu 12-15 Yamaguchi

19:09 IST: What a placement that was from Yamaguchi. Sindhu had no chance on that one. Sindhu 10-13 Yamaguchi

19:09 IST: Brilliant rally comes to an end with a brilliant shot from Yamaguchi. Sindhu 9-12 Yamaguchi

19:08 IST: Brilliant smash from Sindhu to win the serve back. Sindhu 8-11 Yamaguchi

19:05 IST: Brilliant cross-court smash from Yamaguchi to win the point. Sindhu 7-10 Yamaguchi in the second game.

19:04 IST: Third straight point for Sindhu, Reduces the deficit. It's 7-8 in favor of Yamaguchi at the moment.

18:59 IST: Brilliant rally comes to an end with a powerful smash from Yamaguchi. Sindhu trailing 2-5 in the second game.

18:56 IST: Sindhu misjudges this time as the shuttle lands inside the back-line. Sindhu 1-4 Yamaguchi

18:56 IST: Sindhu wins her first point of the second game. That was well judged by her on the line. Sindhu 1-2 Yamaguchi

18:55 IST: Aggressive start from Yamaguchi in the second game. Wins the first point with a powerful smash. Sindhu 0-1 Yamaguchi

18:50 IST: Yamaguchi closing in now. Third point in a row for the Japanese. Sindhu 19-16 Yamaguchi

18:44 IST: Easily done by Sindhu. Smashes right in the middle as Yamaguchi was on the left of the court. Sindhu 12-12 Yamaguchi

18:43 IST: Yamaguchi wins the first point after break as Sindhu hits over the line. Sindhu 10-12 Yamaguchi

18:41 IST: After leveling at 9-9, Sindhu again goes falls behind as shuttle lands outside the line. Sindhu 9-10 Yamaguchi

18:38 IST: Sindhu wins the point with a smash and gets to serve. Sindhu 5-8 Yamaguchi

18:36 IST: Yamaguchi challenges as the shuttle was called out. Yamaguchi loses the review. Sindhu 3-5 Yamaguchi

18:28 IST: PV Sindhu and Akane Yamaguchi have walked into the court. We are just minutes away from the start.

17:55 IST: He Bingjiao won the first game 21-15, The second game is inching to a tense finish as  Carolina Marin is fighting back, leading by 19-16 at the moment, trying to take the match into the decider.

17:15 IST: Match between world no.3 PV Sindhu and world no.2 Akane Yamaguchi will begin after the first semi-final.

17:10 IST: The first women's semi-final between Carolina Marin and He Bingjiao is currently underway.

17:00 IST: Hello and welcome to the live blog of the BWF Badminton World Championships semi-final round.

Women's singles star P.V, Sindhu was the lone Indian to enter the semi-finals of the Badminton World Championships, with Saina Nehwal, B. Sai Praneeth and the mixed doubles pair of Satwiksairaj Rankireddy and Ashwini Ponnappa losing in the quarter-finals here on Friday. Third seed Sindhu, facing Japanese Nozomi Okuhara, who defeated her at the previous edition's final, won 21-17, 21-19 in 58 minutes. In both games, Okuhara was strong at the beginning but once Sindhu caught up with her, the Japanese failed to control the Hyderabadi, who came into the match with a 6-5 record in head-to-head.

The highlight of the first game were the two cross-court returns from Sindhu that was well placed in the top left corner of Okuhara's side of the court. By the end of the first game, Sindhu looked in fine form. In the second game, Okuhara burst into a five-point lead as she led the Indian 5-0. The World No.3 tried getting back in the game with occasional points but Okuhara had other plans as they led Sindhu 11-8 at mid-break of the second game. After the break, Sindhu pulled her rank and drew level at 11-11.

It was at 15-14 when Sindhu, for the first time, took a lead in the second game but Okuhara pulled one back to draw level at 15-15. Thereafter, the second game was evenly poised as both the players were neck-and-neck throughout the remaining of the game. But it was the Indian who held her nerves and forced her Japanese opponent to make a few errors as she claimed the second game in style. With this win, she avenged her 2017 World Championships final loss.

Comments
Topics mentioned in this article
Badminton PV Sindhu Live Blogs
Get the latest updates on India vs Australia Series, check out the India vs Australia Schedule for 2020-21 and Ind vs Aus live score . Like us on Facebook or follow us on Twitter for more sports updates. You can also download the NDTV Cricket app for Android or iOS.