India vs Australia: Australia captain Tim Paine was trolled on social media for dropping three catches on the final day of the Sydney Test. 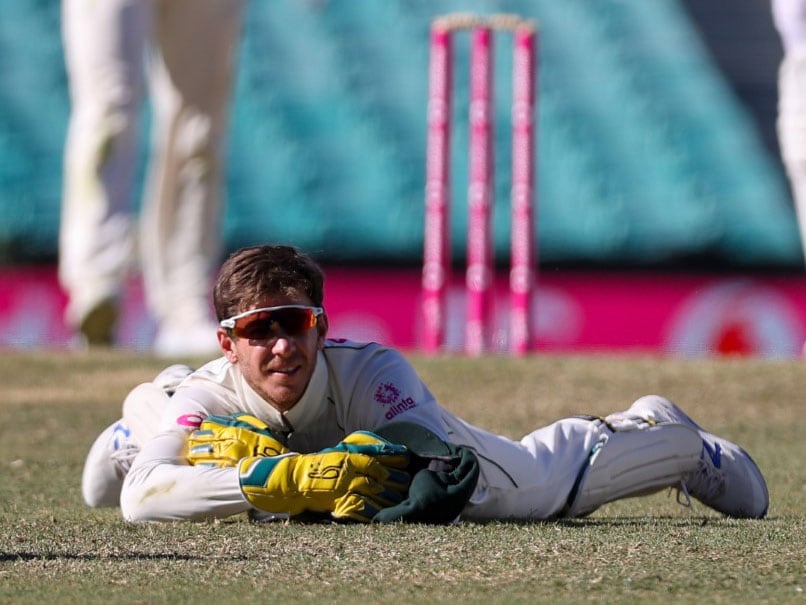 India vs Australia: Tim Paine dropped a catch off Hanuma Vihari in the final moments of Day Five.© AFP

Australian captain and wicketkeeper Tim Paine faced flak on social media after he dropped a catch off Hanuma Vihari in the dying moments of the final day of the Sydney Test. It was the third catch that the Paine had dropped on the final day, having earlier grassed Rishabh Pant twice. Mitchell Starc induced an outside edge off Vihari's bat and Paine dived to his right, in front of first slip, to take the catch but couldn't hold on. With Australia desperate for the last five Indian wickets in the final session of the Test, this drop was costly for the hosts and Paine was criticised by fans and experts alike. "That guy too busy doing a podcast behind stumps," wrote one Twitter user, referring to the chatter between Paine and India's R Ashwin a few overs earlier.

Vihari edges and a chance goes down late on the final day...

HAHA TIM PAINE DROPPED THAT. THE GUY TOO BUSY DOING A PODCAST BEHIND THE STUMPS

A prolonged conversation between Paine and Ashwin had ensued earlier in the session as Paine, standing up to the stumps for bowler Nathan Lyon, engaged in distraction tactics against Ashwin, who was on strike at the time.

"Paine only talks. Ashwin gives it back with ball, bat, and now words. Paine 1 | Ashwin 3" wrote another.

Ashwin gives it back with ball, bat, and now words.

Paine received some scathing critique for engaging Ashwin verbally and then dropping the catch off Vihari.

"Tim Paine's lips and gloves - both don't shut on time," wrote one user on Twitter.

Tim Paine's lips and gloves - both don't shut on time.

The conversation between the two cricketers was quoted by some who could pick it off the stump mic.

"Tim Paine: can't wait for the Gabba Test. Ravi Ashwin: Can't wait to see you in India, that'd be your last series."

Ravi Ashwin: "Can't wait to see you in India, that'd be your last series."

A 15-second reconstruction of Paine's antics on the field did nobody any harm.

Paine's dropped catches went quite a way in deciding if the hosts won the match or India escaped with a draw. As it turned out, the Aussies fell well short of their target.

Ravichandran Ashwin Australia vs India 2020-21 Australia vs India, 3rd Test Cricket
Get the latest updates on ICC T20 Worldcup 2022, check out the Schedule and Live Score. Like us on Facebook or follow us on Twitter for more sports updates. You can also download the NDTV Cricket app for Android or iOS.