Australia vs India, 4th Test: Washington Sundar played some glorious shots during his 62-run knock but the one hit that stood out was his no-look-six over midwicket off Nathan Lyon's bowling. 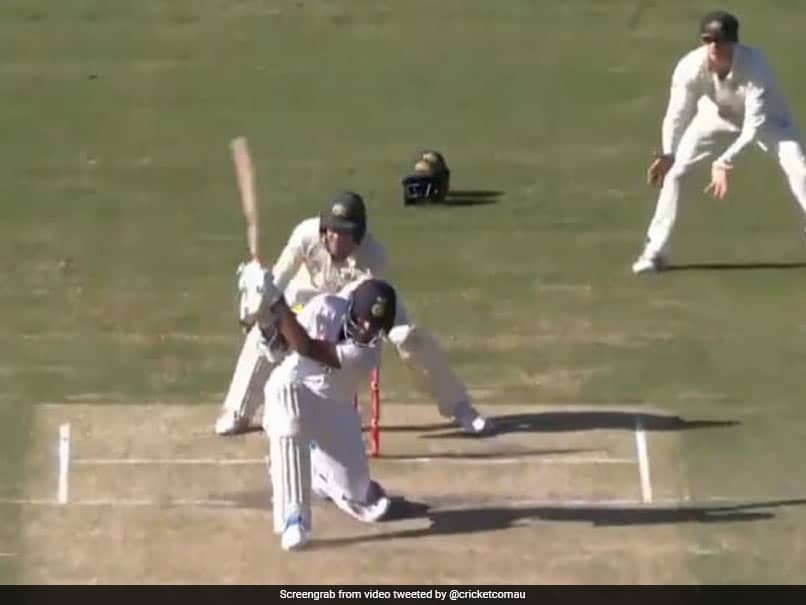 After a successful outing with the ball on his Test debut, Washington Sundar led India's fightback with the bat as well, playing a crucial knock of 62 runs to bail India out of trouble in the first innings on Day 3 of the fourth Test at the Gabba in Brisbane. Sundar reaped the rewards of an inspired batting performance as he brought up his maiden half-century on his Test debut. The left-handed batsman played some glorious shots during his knock but there was one that stood out. Having completed his fifty, Sundar took on Australia off-spinner Nathan Lyon and slog swept him for a no-look six over midwicket. Sundar's confidence in his stroke was visible from the fact that as soon as the ball left his bat, he knew it was going to sail over the fence, hence didn't even bother having a look at it.

Sundar, playing as the lone Indian spinner in the match, impressed one and all with his three wickets in the first innings, including the wickets of Steve Smith and Cameron Green.

At one stage India had lost six wickets for 186 runs and with not much batting left the visitors were on the verge of conceding a huge first innings deficit.

However, Sundar and Shardul Thakur put on the best partnership of the match so far to bail India out of trouble and get them close to Australia's first innings total of 369 runs.

In the process, the duo also broke the record of the highest seventh-wicket partnership by an Indian pair at the Gabba, bettering the previous best of 58 runs by Kapil Dev and Manoj Prabhakar in 1991.

Nathan Lyon Cricket Australia vs India, 4th Test
Get the latest updates on IPL 2021, IPL Points Table , IPL Schedule 2021 , live score . Like us on Facebook or follow us on Twitter for more sports updates. You can also download the NDTV Cricket app for Android or iOS.