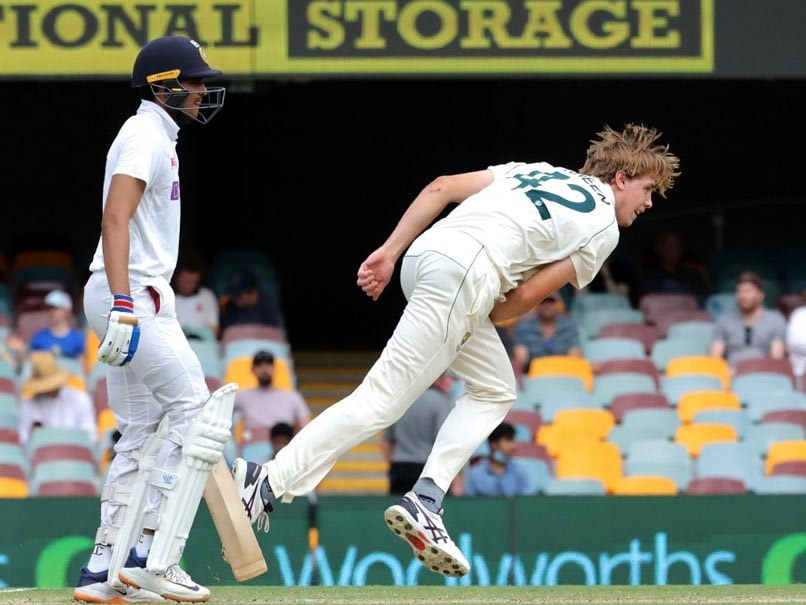 Shubman Gill looks on as Cameron Green bowls during the 4th Test in Brisbane.© AFP

Former cricketer Greg Chappell believes that the BCCI's method of nurturing youngsters has profited the Indian cricket team and set the foundation for their recent success against Australia in the Border-Gavaskar Trophy. The former India coach also criticised Cricket Australia's way of training youngsters for international cricket. Writing for The Sydney Morning Herald, the former Aussie batsman stated, "By the time an Indian player reaches the national XI, he has had an all-round apprenticeship that prepares him to walk into the Indian side with a reasonable chance of success."

"Our young cricketers are weekend warriors compared to their Indian compatriots, who get challenging matchplay from the Under-16 age group onwards. As cricket is THE major sport in India, the best athletes in the country are playing the game and competition for state places is fierce."

He further added, "am afraid, in comparison, Will Pucovski and Cameron Green are still in primary school in terms of experience."

Considered to be one of the greatest Australian cricketers of all time, Chappell feels that his country prioritises education over cricket at youth level, unlike India.

He explained that boys in Australia only get to play under-age cricket during school holidays within a short time-space.

The 72-year-old wrote that due to carnivals only having a time duration of 8-10 days, Australian boys only get to play 50-over cricket, so that they can bat and bowl more during these tournaments.

Writing about an example that Indian boys are made to prioritise cricket over academics, he quipped, "Academic endeavour slips into the background for most of these lads at this age because, as one 16-year-old told me at the 2012 Youth World Cup in Townsville when asked about his schooling, "Sir, I don't go to school. I will only get one chance at cricket, I can study at any time.""

Chappell revealed that Indian cricketers get competitive fixtures from the under-16 group, when boys in his country are only playing on the weekends.

Pointing towards Shubman Gill, Chappell opined that he is the perfect example of India's rigourous cricket system for youngsters. "Shubman Gill represented Punjab in the three-day U16 interstate competition. At that age, only red-ball cricket is played because it is recognised that, to develop top-class batsmen, players need time to build a solid technical base", he opined.

He went on to further explain, "At the U19 level, Gill played in four-day red-ball tournaments and a 50-over white-ball tournament comprising four teams for which 60 players are chosen. Match referees at these tournaments are all talent spotters. From there, Gill, who was a standout at this age, was selected as vice-captain to Prithvi Shaw in the winning 2018 Youth World Cup squad, where he scored 102 against Pakistan in the semi-final and was named player of the tournament."

After youth cricket, Gill also played in U-23 state competitions, where the focus is on red-ball cricket. He also played for India A, where he hogged the limelight with a knock of 204 from 248 balls against West Indies A.

Chappell also credited Rahul Dravid, who is the Director of the National Cricket Academy in Bengaluru.

Will Pucovski and Cameron Green were the youngsters in the Australian team during the four-match Test series against India.

Chappell revealed that the duo never got the experience to play in a Youth World Cup due to injury and timing. They have also hardly played for Australia A, and owe their selection to their performance for their state teams.

"The BCCI is investing millions of dollars in budding Indian cricketers. Cricket Australia, by comparison, spends $44m dollars on the Sheffield Shield. The comparative spending gap isn't a gulf; it is the size of the Indian Ocean", wrote Chappell.

Chappell also feels that Australia are no more the best cricket team in the world, but still have time to regain their success. He wrote that Cricket Australia needs to change its attitude and invest in talent.

He believes that his country's board can draw inspiration from India, which has 38-first class teams, with youth and A teams consisting of a surprising degree of maturity.

India Cricket Team Gregory Stephen Chappell Shubman Gill Will Pucovski Cameron Green Australia vs India 2020-21 Cricket
Get the latest updates on IPL Auction 2023 and check out  IPL 2023 and Live Cricket Score. Like us on Facebook or follow us on Twitter for more sports updates. You can also download the NDTV Cricket app for Android or iOS.