Australia vs India: All-Round Jasprit Bumrah, Mohammed Shami Headline Day 1 As Australia A Bowled Out For 108

India vs Australia: Jasprit Burmah scored his maiden first-class fifty and returned 2/33 as Australia A were all out for 108 in reply to Indians' 194 on the first day of the second warm-up match in Sydney. 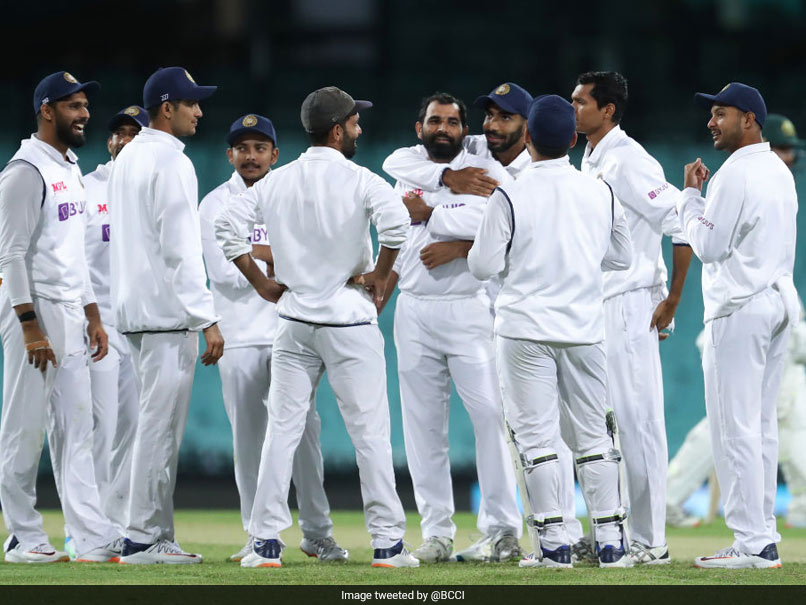 Mohammed Shami returned 3/29 to help the Indians bowl out Australia A for 108.© BCCI/Twitter

Pace spearhead Jasprit Bumrah headlined the opening day's play with a maiden first-class fifty and then chipped in with a couple of wickets in an impressive bowling effort putting India in the driver's seat against Australia A in the pink ball warm-up game on Friday. With his unbeaten 55 off 57 balls, Bumrah was the top-scorer for the visitors, who folded for a disappointing 194 in 48.3 overs at the Sydney Cricket Ground. The Indians however came back strongly with the ball to bundle out Australia A for 108 at stumps as 20 wickets fell on a curtailed day when almost an hour was lost due to heavy rain.

On a day when the recognised batsmen struggled to put runs on the board, Bumrah, who came into the game with a Test batting average of 2.9, produced a stellar performance with the willow, smashing the ball six times to the fence and twice over it.

The 27-year-old, known for his wily bowling, reached his half-century in style, hooking a bouncer by all-rounder Will Sutherland for a huge six over the deep square-leg fence.

Bumrah and fellow pacer Mohammed Siraj stitched a valuable 71-run partnership for the 10th wicket before the Indian innings ended with a semblance of parity.

Pleasantly surprised with his batting heroics, Bumrah's teammates got up, clapped and gave him a guard of honour as he walked into the dressing room.

Earlier, after skipper Ajinkya Rahane opted to bat, Prithvi Shaw (40) and Shubman Gill (43) showed enough glimpses of why they are rated so highly.

However, the rest of the teammates including the seasoned Rahane failed to impress on the first day of their final tune-up before the start of the four-match Test series beginning December 17.

The two specialist wicketkeepers Wriddhiman Saha (0) and Rishabh Pant (5) both fell cheaply with the former failing to open his account after the likes of Mayank Agarwal and Hanuma Vihari were also dismissed cheaply.

But the most distraught will be the duo of Shaw and Gill, both getting out after promising so much with their dazzling strokes and positive approach.

The Australians may have bowled out India for a low score but they wouldn't be too happy with the way their batsmen fared during the day's play.

While Joe Burns was sent back by a fine Bumrah delivery that moved away just enough to take the opener's edge, what will worry them most is the injury to Test hopeful Cameron Green.

All-rounder Green, who had scored a hundred in the first warm-up game, suffered a concussion while bowling after a rasping straight drive from Bumrah struck him on the head.

Bowling his second spell of the day, the 21-year-old was unable to react in time when Bumrah's full-blooded drive slipped through his palms and struck on the right side of the head.

The all-rounder immediately went down and non-striker Mohammed Siraj rushed to check on him.

After being examined for a couple of minutes by the medical team, the all-rounder was back on his feet as he walked off the field for further assessment. Batsman Patrick Rowe was named his concussion substitute.

Bumrah (2/33) and Shami (3/29) bowled a terrific opening spell and beat the outside edge of Marcus Harris and Nic Maddinson a number of times before rain intervened.

On resumption, Harris hit a boundary straightaway after he found the gap between cover and point.

Shami was rewarded for his perseverance as he picked up the wickets of Harris and Ben McDermott, a hint swing and seam movement aiding him.

Siraj (1/26) then had Maddinson to leave the home team reeling at 52 for four. Shami made it 56 for five when he had Sean Abbott caught behind.

Jack Wildermuth went for a cut against Bumrah but ended up getting an outside before Navdeep Saini (3/19) sent back Will Sutherland, Alex Carey and Mitchel Swepson, coming in as second change.

Mohammed Shami Prithvi Shaw Shubman Gill Cameron Green Australia vs India 2020-21 Cricket
Get the latest updates on ICC T20 Worldcup 2022, check out the Schedule and Live Score. Like us on Facebook or follow us on Twitter for more sports updates. You can also download the NDTV Cricket app for Android or iOS.