Rishabh Pant took six catches in the first innings of the Adelaide Test between India and Australia. 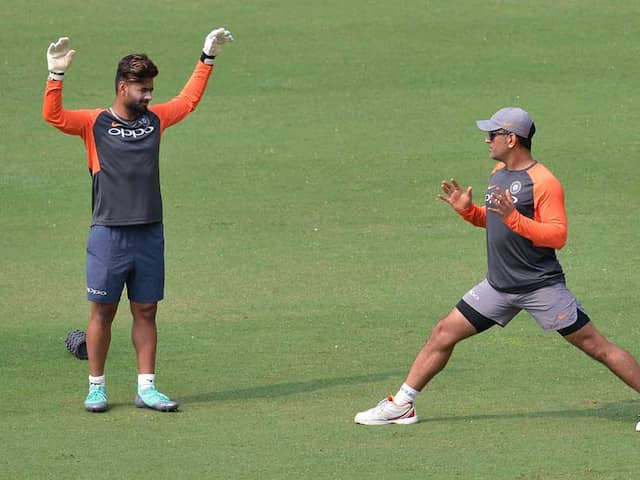 Rishabh Pant is playing only his sixth Test match.© AFP

Rishabh Pant, who is carrying the onus of wicket-keeping in Test cricket for the Indian cricket team, after MS Dhoni's retirement and Wriddhiman Saha's injury, on Saturday achieved a significant feat. The 21-year-old Rishabh Pant during the ongoing Adelaide Test against Australia became the Indian wicket-keeper to take most catches in an innings equalling MS Dhoni's record. Pant achieved the feat after taking Josh Hazlewood's catch behind the stumps from Mohammed Shami's delivery in the first innings. It was Pant's sixth catch in the innings and Dhoni had achieved the same feat in Wellington, 2009.

6 - most catches by an Indian keeper in a Test inns: MS Dhoni at Wellington 2009 and Rishabh Pant today!#AusvInd#AusvsInd

The 37-year-old Dhoni had called time on his Test career in 2014. He had played his last match in the longest format of the game in Melbourne against Australia from December 26 to 30, 2014.

Pant, meanwhile playing only his sixth Test match has scored 346 runs with an average of 43.25 and the highest score of 114.

In the going match, Pant managed to score 25 runs in the first innings before he was sent back by Nathan Lyon. His knock was laced with two boundaries and one hit over the fence.

Saha, on the other hand had underwent a shoulder surgery in Manchester, earlier this year.

MS Dhoni Rishabh Pant Cricket
Get the latest Cricket news, check out the India cricket schedule, Cricket live score . Like us on Facebook or follow us on Twitter for more sports updates. You can also download the NDTV Cricket app for Android or iOS.