Rishabh Pant scored 20 off 15 balls, a knock that comprised one boundary and a six. 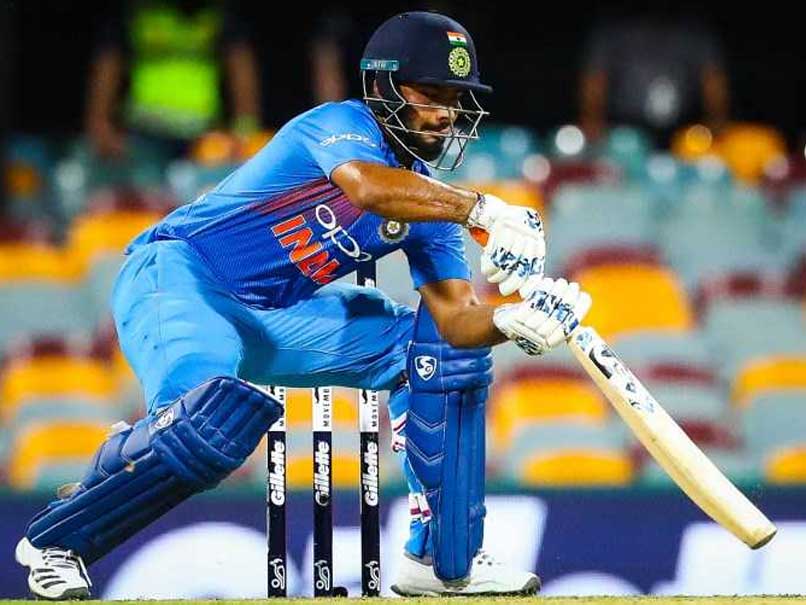 Andrew Tye dismissed Rishabh Pant for 20 in the 1st T20I in Brisbane.© AFP

India started their tour of Australia by losing the opening match of the three-match T20I series by four runs at The Gabba in Brisbane. In a rain-hit match, India had to chase a target of 174 in 17 overs. At the beginning of the chase, Shikhar Dhawan managed to motor India towards the target by taming the Australian attack. But after Dhawan's dismissal, the responsibility rested on young wicketkeeper-batsman Rishabh Pant and Nidhas Trophy 2018 hero Dinesh Karthik. Although India never really gained the momentum in the chase, Pant and Karthik's presence kept India in the contest. And India captain Virat Kohli thinks Pant's departure tilted the decision in favour of the hosts.

"It was a close game, was a see-saw battle. Started well with the bat, fumbled in the middle overs, in the end, we thought we'll win with Pant and Karthik but it changed again with Pant's dismissal," Kohli said at the post-match presentation.

In the 174-run chase, India could only muster 169/7, courtesy a magnificent last over from Marcus Stoinis.

Dhawan, who became the highest run-getter in T20Is in a calendar year, kept India's chances alive with his quickfire knock, however, failed to complete the task. And captain Kohli had nothing but praise for the left-handed batsman.

"He's (Dhawan) a very strong player at the top of the order. Hasn't got a T20 hundred yet, but the way he plays it really benefits the team," Kohli said.

After losing a cliffhanger of a match, Kohli said they will learn from the mistakes and get back better.

"That's how it goes in the game. What we can do is to learn from them (mistakes) and get back better," Kohli added.

"Thought the boys played really well, especially in the middle overs with the bat. Showed a lot of courage to take it on. Some of our bowling was outstanding under pressure," Finch said.

Second India vs Australia T20I match will be played on Friday in Melbourne.

Virat Kohli Cricket Australia vs India 2018/19
Get the latest updates on ICC Women's Cricket World Cup 2022 and IPL 2022, check out the Schedule , Live Score and IPL Points Table. Like us on Facebook or follow us on Twitter for more sports updates. You can also download the NDTV Cricket app for Android or iOS.