Aaron Finch was asked to open for Australia in Tests against India after he made a solid debut against Pakistan in the United Arab Emirates (UAE) in October. 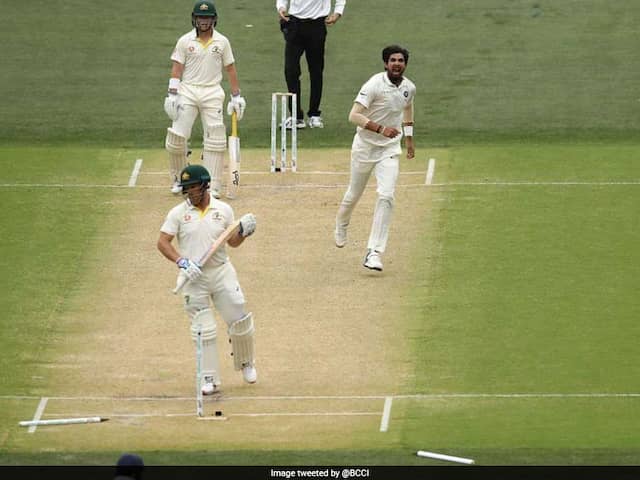 Aaron Finch was knocked over in the first over by Ishant Sharma for a 3-ball duck.© Twitter

The Australian top and middle-order failed to deliver with the bat in the first innings as they ended on 191 for seven against India on Day 2 of the first Test in Adelaide on Friday. Apart from a gritty half-century from local lad Travis Head (61 not out), all the others disappointed, as no one was able to cross the 50-run mark. Opener Aaron Finch, who was being looked at to provide the hosts with a solid start, got out for a 3-ball duck in the first over of Ishant Sharma. Former Australian captain Ricky Ponting, after the day's play, criticised the Finch for his reckless shot right at the start of the innings.

"The shot we saw today is not what a good Test match opener should do third ball of the innings. The new ball on that wicket was always going to be the hardest time to bat and he went for a hard cover drive. Sometimes that can happen, but he's got a lot of work to do, I think," Ponting was quoted as saying by cricket.com.au.

Finch was asked to open for Australia in Tests after he made a solid debut against Pakistan in the United Arab Emirates (UAE) in October. Pointing out the shortcomings of Finch in red ball cricket, Ponting raised questions about the selectors bringing Finch out as an opener in the Pakistan series and continuing with him in Australia as well.

"Everyone knows he struggles a little bit against moving red ball and we have a series here and an Ashes series not too far away, and the ball's going to move around a lot when we're over in England," Ponting added.

At stumps on Day 2, Australia were still 59 runs behind in the first innings with three wickets remaining.

For India, Ravichandran Ashwin was the most successful bowler on the second day, claiming three for 50. Ishant Sharma and Jasprit Bumrah managed two wickets each before the close of play.

Adelaide Oval, Adelaide Australia vs India 2018/19 Cricket Ricky Ponting Australia vs India, 1st Test
Get the latest Cricket news, check out the India cricket schedule, Cricket live score . Like us on Facebook or follow us on Twitter for more sports updates. You can also download the NDTV Cricket app for Android or iOS.