Murali Vijay said that he will fancy his chances on the bouncier Australian wickets, which favour his backfoot game. 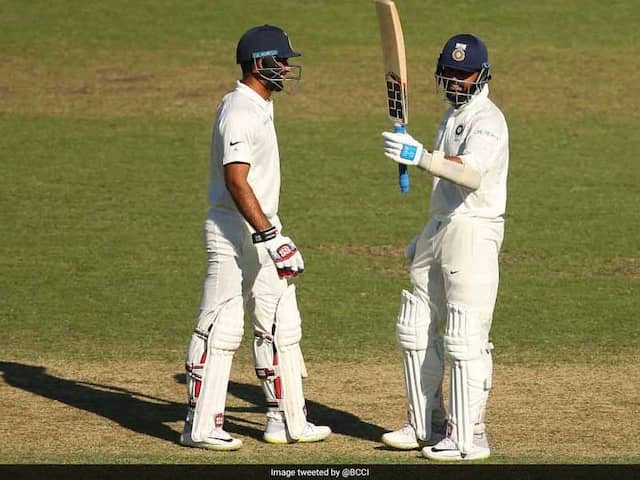 Murali Vijay slammed 26 runs in an over bowled by Jake Carder.© Twitter

Murali Vijay (129) slammed 26 runs in an over bowled by Jake Carder to race to his century against the Cricket Australia XI during the warm-up match, that ended in a draw in Sydney on Saturday. Murali Vijay began with two consecutive boundaries in the over, which was followed by maximum. In the last three balls, Vijay took a double which was followed by six and boundary to end the over. The Board of Control For Cricket in India (BCCI) applauded Vijay's fine knock and said, "a stylish one."

Century for M Vijay! A stylish one at that #TeamIndia #CAXIvIND pic.twitter.com/CMi4D0uTRR

Vijay, returning to the Test squad after being dropped mid-way through the England tour, celebrated his comeback with a century off 118 balls.

He looked solid throughout the innings on the fourth day, and had reached his half-century off 91 balls.

Thereafter he sped through the second fifty-runs, off only 27 balls, getting to three figures off 118 deliveries.

Earlier, Rahul scored 62 (98 balls) as the duo put on 109 runs for the opening wicket as India finished at 211-2 (43.4 overs) in their second innings at stumps on day four of the tour game against Cricket Australia XI here at the Sydney Cricket Ground.

Rahul batted with greater confidence than in recent times, hitting eight fours and a six, as he warmed up for the first Test. At times, he did look shaky with circumspect timing, as seen in his dismissal off a full toss caught at mid-wicket.

Harry Nielsen (100) scored a hundred off 170 balls, including nine fours, and was out caught at mid-off as he hit a skier off Kohli. The hosts' lower order all got good runs with Daniel Fallins (43), Luke

Robins (38 not out) and Jackson Coleman (36) keeping the visitors chasing leather in the sun.

The latter duo added 57 runs for the final wicket. So much so that India brought on Jasprit Bumrah (1-0) and Kuldeep Yadav (0-3), not initially included in the 14-man list at the start of the game, to bowl after lunch.

Bumrah looked in good rhythm as he bowled Coleman with a well-aimed yorker off his seventh delivery.

Vijay said that he will fancy his chances on the bouncier Australian wickets, which favour his backfoot game.

"It was good to get some practice hitting over the boundary. I just took my chances and it came my way. I know opportunities are round the corner and wanted to be in a positive frame of mind.

"Playing in Australia suits my game because I am a batsman who likes to play on the backfoot. Australia is the one place you get the bounce so you can play your shots coming from India and exploring shots that you have kept in your kit. I can get them out."

India will begin their Test campaign on December 6 in Adelaide.