India ended the day at 172 for three in reply to Australia's 326 all out in Perth on Saturday. 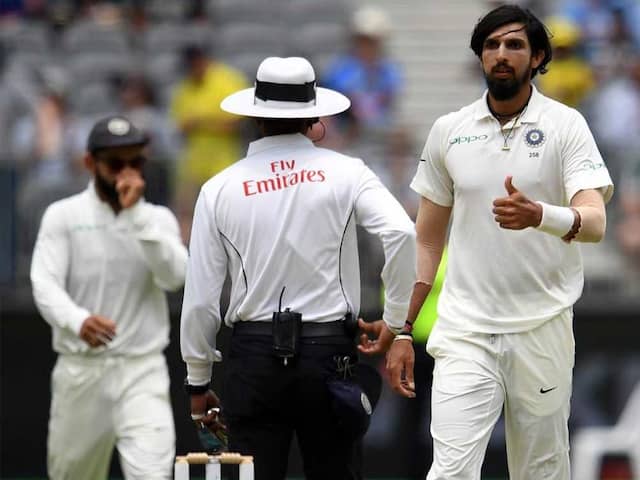 Ishant Sharma led the bowling attack and claimed four wickets as India bowled out Australia for 326 in their first inning on the second day of the second Test in Perth on Saturday. Earlier in the first Test of the four-match series that India won by 31 runs, Ishant Sharma bowled five no-balls in two innings and a few also escaped the on-field umpires' attention. While the lapses from the umpires attracted the ire of the host nation, the Australian media brought up the topic in a discussion when Ishant came to speak at the post-day press conference.

Taking a jibe at the Australian media, Ishant said: "Maybe Australian media should answer the question. Not me. I have been playing cricket for so long. And these things happen. Because you are a human, you are bound to make a mistake. I was not worried about it at all."

The 30-year-old fast bowler said that the counter-attack from Virat Kohli and Ajinkya Rahane was vital as India ended the day at 172 for three in reply to Australia's 326 all out.

"Whenever Virat is batting we feel confident. We finished the day in a strong position. Hopefully they will both continue. The game is in the balance right now. Hopefully we will dominate the first session tomorrow," Ishant said.

"Rahane added quickfire 20-30 runs and they were really needed at that time. If they had played defence then Australia would have stayed on their plans and it was important for him to counter attack to force them to change plans," he added.

Earlier, Kohli added 74 runs for the third wicket with Cheteshwar Pujara after the Indian openers had been dismissed cheaply.

"When Pujara defends, the ball doesn't go past the square. I have played against him and I know how difficult it is to bowl at him. He makes the bowlers tired. I knew if he stays he can do wonders. It was unfortunate the way he got out. We don't get those wickets that easily, going down leg and caught behind.

"Then, Jinx and Virat played pretty good shots which shifted momentum in our side and we ended the day pretty well," he said. Sharma recovered from a poor spell, especially in the morning session on day one, to finish with 4-41 as Australia only added 49 to their overnight score of 277/6.

"I think the wicket was really slow at that time. It wasn't as up and down as it was after lunch when there was something there for the bowlers. The first hour was the best time to bat on at that wicket. As a senior bowler, a responsibility has been added.

India lead the four-match series 1-0 following their 31-run win at Adelaide and they entered the second game high on confidence.

"On day one, we need to be patient otherwise if you think there is going to be lot of bounce and I will bounce them out, it will not work. Bowling to good areas is really important on these kind of wickets.

"That's why we kept bowling in the right areas, and keep on hitting those good lengths. The aim is to find out what the good length is, speak among each other, and then it becomes easier for everybody to find those lengths and bowl," he added.

Praising Jasprit Bumrah, who was the stand-out Indian bowler in the first innings, Sharma said, "I don't think he is improving. When he made his debut he had already improved (from a white-ball cricketer). That is why he was picked. The good thing about him is he gives his heart out and you only need to support him.

"Maybe he was beating the bat couple of times but he was bowling 140 every single time. He never gives up, which is the best sign for any fast bowler."

Ishant Sharma Australia vs India 2018/19 Cricket
Get the latest Cricket news, check out the India cricket schedule, Cricket live score . Like us on Facebook or follow us on Twitter for more sports updates. You can also download the NDTV Cricket app for Android or iOS.