India declared their first innings on 443 for seven and Australia were 8 without any loss at stumps on Day 2. 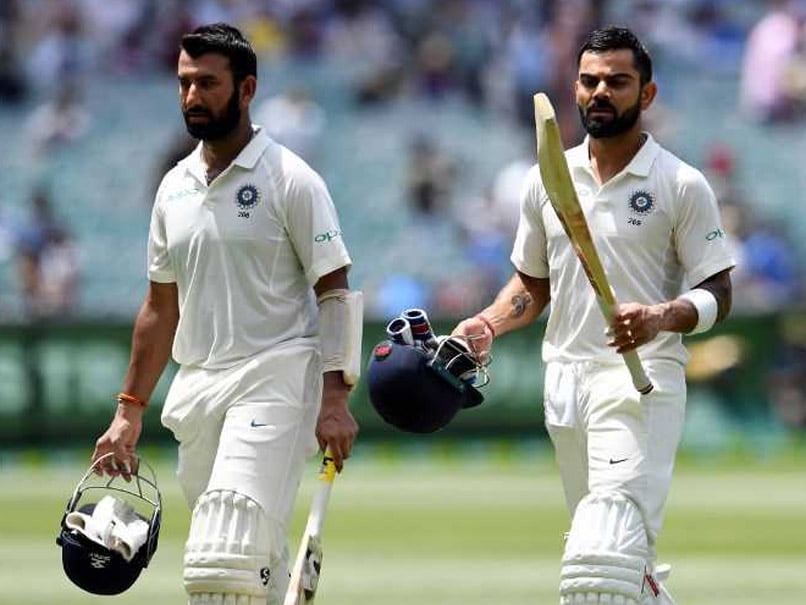 Virat Kohli and Cheteshwar Pujara shared a 170-run partnership for the 3rd wicket in the first innings.© AFP

Cheteshwar Pujara (106) scored a fine century on a tricky surface helping India finish on top at stumps on Day 2 of the 4th Test in Melbourne. The gritty knock from the 30-year-old was also crucial as the pitch showed signs of variable bounce on the second day itself. Admitting that the Melbourne pitch was not a traditional Australian wicket, Australian opener Aaron Finch said that is deteriorating quicker than anticipated. The 32-year-old also felt that all three results are still possible in the Test.

"It's not your traditional Australian wicket where you have three slips and a gully all day and you bang away, and the ball seams and carries like we saw in Perth. There, a lot of dismissals were behind the wicket," Finch said.

"This wicket is probably deteriorating more than we thought it would. Even tonight it was skidding through, there were a couple that took off. So it's still game on if we bowl well and put India under pressure (in the second innings).

"I think all three results are still on the table, 100 per cent, India (victory), Australia (victory) and a draw," said the 32-year-old.

Finch praised the Australian attack for bowling nearly six sessions on the first two days, and in particular singled out Pat Cummins for praise, who picked up 3-72 in 34 overs before padding up to be night-watchman if the early wicket fell.

"I think Patty Cummins was 34 overs for the innings and then to strap the pads on to be night-watchman is a pretty brave effort.

"I think the way that Pat keeps fronting up and coming back is a real testament to his fitness.

"He probably didn't get the rewards he deserved in the first two Tests, but you've heard every coach say it, you can bowl a lot worse and get a lot more wickets," Finch said.

Cummins took the wicket of centurion Pujara, after dismissing Mayank Agarwal and Hanuma Vihari on the first day.

"I'm sure his rewards will come. There's pace, there's bounce, when there's not a lot happening he seems to be the guy who can make something out of nothing. Touch wood that continues for a long time.

"He's a super player, talent with the bat, with the ball, in the field, although he dropped one today that's beside the point. He's just a super package as a cricketer and an even better bloke as well."

Australia toiled in the field for almost two days, bowling 169.4 overs to the Indian batsmen.  Talking about the bowling unit as a whole, Finch said, "It was a long stint. I think having Mitch Marsh there was a real crucial part of that bowling attack, the way he controlled the run rate as well.

"The amount of work the guys did bowling to plans it would've been easy particularly in that second session today to let the game really get away from us. Before you know it they're 450-500 just after tea and it's a tough way back into the game then.

"The way they were grinding away and rolled up their sleeves and did the hard work was outstanding. Obviously they're tired, no doubt."

Finch said that he wasn't surprised after India declared with 25 minutes remaining in the day. "After Kohli and Pujara fell, I think their plans changed a bit. They were 300-odd for five wickets down and I think we sniffed an opportunity. Their middle order played well, and it is still well and truly game on.

"I wasn't surprised at all especially with us having been in the field for two days. It was attraction of having us at two-down overnight and it is really positive, and I thought most teams in their position would have done the same thing," he signed off.

Melbourne Cricket Ground Australia vs India 2018/19 Cricket Australia vs India, 3rd Test
Get the latest updates on ICC T20 Worldcup 2022, check out the Schedule and Live Score. Like us on Facebook or follow us on Twitter for more sports updates. You can also download the NDTV Cricket app for Android or iOS.