Australia were eight for no loss from six overs at stumps, trailing India by 435 runs. 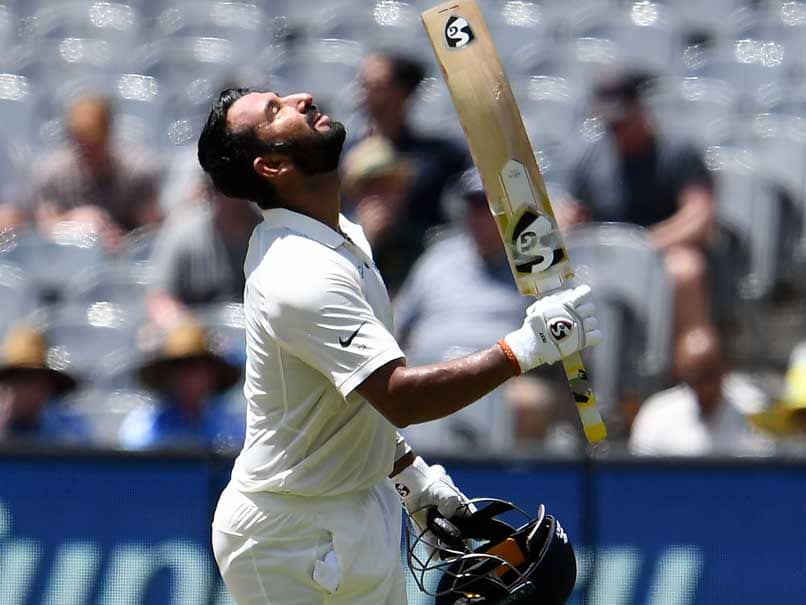 Cheteshwar Pujara scored a dogged but faultless 106 off 319 balls.© AFP

Cheteshwar Pujara scored a classical 319-ball 106, while captain Virat Kohli, opener Mayank Agarwal and middle-order batsman Rohit Sharma contributed with a fifty each as India dominated the second day of the third Test against Australia in Melbourne on Thursday. After declaring Indian innings for 443/7, bowlers restricted the Aussie openers to eight without loss at stumps. Marcus Harris was on five (not out) and Aaron Finch was unbeaten on three by the end of the day's play with the hosts trailing India by 435 runs.

Pujara hit his second century of the series to ensure that India consolidated the good start of the first day on Wednesday. It was though his slowest hundred in Test cricket yet.

Kohli, who contributed a significant 82 off 204 balls, made a surprising declaration and finished India's first innings at 443 for 7.

Rohit Sharma ended on 63 not out off 114 balls, inclusive of five fours, while Pat Cummins was the pick of the Australian bowlers, taking 3/72 in a back-breaking effort of 34 overs.

Post tea, it was a comedy of fielding errors from Australia as they missed three easy chances, all of Nathan Lyon (1/110) in what proved to be a frustrating 48 overs from him.

First, in the 147th over, substitute fielder Peter Siddle put down Rohit (on 15 then) at backward square leg as the batsman played a wild sweep. A ball later, Ajinkya Rahane (34) was lucky when on 32 as Travis Head was caught napping at short leg when the ball sailed past him.

Rahane got unlucky shortly afterwards though as one delivery from Lyon kept too low and he was plumb lbw.

Rishabh Pant (39) played an uncharacteristic defensive innings, and the only aerial stroke he played was in the 159th over off Lyon when Cummins spilled the chance at long on. He was on 15 then.

Australia took the third new ball in the 167th over and it worked as Pant looped up a catch to Usman Khawaja behind the wickets off Mitchell Starc (2/87).

The accelerating burst before the declaration never came as skipper Kohli called the batsmen in when Ravindra Jadeja (4) was caught behind off Josh Hazlewood (1/86).

Rahane and Rohit took India to 346/4 at tea after Australia removed both Pujara and Kohli in the space of four overs.

Post lunch, Kohli-Pujara took their third-wicket partnership to 170 runs before the game turned.

The Indian skipper took medication for some back issue and then stepped through the gears as he brought out two pulls against Mitchell Starc (1/68) in the 123rd over. He pressed on the accelerator a tad too much, and cut straight to third man, much to the bowler's delight.

Four overs later, in the 126th, Pujara got a delivery from Cummins that kept a tad low and knocked back his stumps as India were suddenly reduced to 299-4.

Rahane then took charge of proceedings and played a breezy knock, not allowing the Australian attack to get on top.

In comparison, Rohit was more sedate and took his time at the crease, even as Tim Paine targeted him with some banter. There was not any major change in the pace of scoring though, with 36 runs coming in the first hour after lunch, and 33 runs in the second.

In the morning session, Pujara scored his 17th hundred as India reached 277/2 at lunch.

Starting from overnight 215/2, India looked ready for another hard day's grind, with Kohli reaching his 20th Test half-century, off 110 balls, in the very first over of the day.

The two batsmen scored quickly in the first hour and kept the scorecard ticking over, before Australia went back to their tactic of cutting runs. Cummins bowled another wonderful spell, extracting most out of the pitch than any other Australian bowler, and he beat the edges of both batsmen on a couple occasions but without any luck.

Lyon bowled with a predominantly leg-side field and into the batsmen. His duel with Pujara was quite remarkable, as the batsman kept turning him to the onside again and again, whilst stepping out on occasion to play him through the offside.

Australia kept a tight leash on the scoring rate as 62 runs came in this morning session. Even so, they could not deny Pujara who reached his second hundred of this series off 280 balls just prior to lunch. In doing so, he went past his previous best tally of runs scored in an overseas Test series. He had scored 309 runs in Sri Lanka in 2017, and currently has 325 runs in the current series.

On day one, Mayank Agarwal scored his maiden Test half-century after India won the toss and opted to bat.

The four-match series is pegged at 1-1, after India won the first Test in Adelaide by 31 runs and Australia took the second Test in Perth by 146 runs.

Rohit Sharma Australia vs India 2018/19 Cricket Australia vs India, 3rd Test
Get the latest updates on IPL 2021, IPL Points Table , IPL Schedule 2021 , live score . Like us on Facebook or follow us on Twitter for more sports updates. You can also download the NDTV Cricket app for Android or iOS.