Australia posted a mammoth 348-8 thanks to some brilliant batting upfront from David Warner and Aaron Finch. But Rohit Sharma gave India a wonderful start and Virat Kohli and Shikhar Dhawan both hit centuries to put the visitors in the driver's seat. However, after the fall of the Delhi duo, some suicidal batting by the Indians gifted hosts the win. Catch all the highlights here.

Shikhar Dhawan and Virat Kohli's centuries went in vain after the duo strung together a 212-run stand to put India on the verge of a famous win. But the visiotrs suffered a shock batting collapse - losing 9 wickets for 46 runs - to throw away the match from a winning position. Australia took a 4-0 lead after India went down by 25 runs in the fourth ODI at Canberra. Catch all highlights here. (SCORECARD | NEWS | PHOTOS | VIDEOS)

16:52 hrs IST: While a beaming Steve Smith couldn't hide his happiness but still had words of praise for Kohli and Dhawan. "When Virat and Shikhar get going, you have to keep doing everything. Richardson was magnificent. Winning is a good habit," said Smith.

16:51 hrs IST: India captain MS Dhoni has said "I will take blame for the defeat. Shikhar and Virat really batted well. We could have done much better".

16:39 hrs IST: Out!! Ishant is gone and rather than Australia winning, India lose by 25 runs to go 4-0 down in the series. Feel sorry for Virat Kohli and Shikhar Dhawan. The rest of the batsmen should have a cold, hard look in the mirror.

16:37 hrs IST: Final Over!! India need 26 off the last 6 balls. The Indians have thrown it away when it looked absolutely impossible to lose.Â

16:35 hrs IST: Four!! Jadeja gets a small edge and the ball runs away to the third man boundary. He is the only lower middle order batsman who has used his brains in this match. India require 26 off 7 balls.

16:30 hrs IST: Out!! Learning from your mistakes seems to be a concept alien to Umesh Yadav. He again goes for a big hit and not surprisingly again it pops in the air.Â Bailey makes no mistake this time. Good riddance Umesh!! India are 316-9 after 47.5 overs.

16:28 hrs IST: Dropped!! There's something funny that seems to have gotten into the air at the Manuka Oval. Umesh finally connects one and not a surprise it pops straight in the air. Richardson drops a sitter!

16:22 hrs IST: Umesh is batting in space. Gravity seems to have deserted him. Can't connect to even a single ball. Australians must be having a big laugh looking at this display from the lower middle order. India are 313-8 after 47 overs.

16:20 hrs IST: What is Umesh Yadav doing? He has Jadeja at the other end but twice he goes for a mighty heave and doesn't even connect. So what if they are bowlers, they know how to defend. Absolutely senseless batting!! India require 37 off 22 balls.

16:17 hrs IST: Out!! Comical batting by Bhuvneshwar. It's like he was out there to give catching practice to the Aussies. Dropped the previous over and not content the Indian pacer steers the ball this time to Smith, who is more than happy to pouch the simple catch. Fifth wicket for Richardson. India 311-8 after 45.5 overs.

16:14 hrs IST: Shooting yourself in the foot is an understatement here! Just atrocious batting from the Indians.

16:11 hrs IST: Out!! This is just incredibly foolish batting! After getting the boundary he needed, Rishi Dhawan thinks he is batting on 100 plus and goes for another big shot and is sent packing. India are 308-7 after 44 overs.Â

16:09 hrs IST: Four!! Day for the Dhawans! Rishi smacks Richardson back straight for a much-needed boundary.Â

15:59 hrs IST: Rahane has come out to bat! He has four stitches on his right hand. Brave man!!

15:55 hrs IST: Out!! Absolutely suicidal batting! Gurkeerat got the boundary needed of the over but went for an expansive shot and only skied the ball for a simple catch. India 286-5 after 40.1 overs. The young man certainly needs a dressing down for the horrible shot. Irresponsible batting!

15:51 hrs IST: Rahane is injured and will bat only if needed. This is huge for Australia. India can't throw this away now.

15:45 hrs IST: Kohli needs to be extra careful now. It all depends on him if India are to win this game. Young Gurkeerat Mann has the opportunity to make a big impression here.

15:39 hrs IST: You know when Steve Smith mis-fields , that the Aussies are under some pressure.

15:38 hrs IST: Beamer from Hastings to Dhawan! No ball. Dhawan was trying a reverse sweep!!

15:30 hrs IST: Fastest to 24 hundreds and now fastest to 25. Records will keep tumbling if Kohli carries on like this.

15:29 hrs IST: Hundred for Kohli!! What an innings, what a player! Cometh the hour, cometh the man! His 25 ODI century and second of this series - reached in 84 balls. Take a bow Virat Kohli!!Â

15:24 hrs IST: Not out!! Dhawan survives. The ball clearly touched the ground before Bailey caught it. Some football play-acting coming in to play from Bailey.

15:23 hrs IST: Oh wait!! Might be the end of Dhawan. Bailey caught the ball and threw it up. Didn't seem to be in control of the catch, though.

15:21 hrs IST: Four!! Dhawan slaps that to the square leg boundary. The Australians look devoid of ideas and must be thinking what has hit them.

15:14 hrs IST: At least one thing is certain looking at how things have gone in this series - both bowling line-ups are very ordinary!!

15:11 hrs IST: India require 109 runs from 110 balls. Kohli and Dhawan are playing the innings of a lifetime for the visitors.

15:07 hrs IST: Hundred for Dhawan!! The left-hander smashes his ninth ODI ton off 92 balls to take India closer to victory. Brilliant knock!! India are 238-1 after 31 overs.

CENTURY! A brilliant knock from Dhawan to bring up his 9th ODI ton off 92 balls: https://t.co/0zWNVRAZEn #AUSvIND pic.twitter.com/09ijxzlTdE

15:01 hrs IST: Four!! Kohli charges Lyon and smacks the ball to the mid-wicket boundary. He is toying around with the off-spinner.

14:59 hrs IST: The Indian flag is flying high at the Manuka Oval.

It's a sensational night for a run chase and India are making the most of it! They're 1-213 after 27 overs #AUSvIND pic.twitter.com/r69Dwnh0pq

14:55 hrs IST: 150-run partnership between Kohli and Dhawan! The Delhi duo are taking India to what will be a memorable victory. They just need to keep their heads.

14:42 hrs IST:Â  Four!! Beautifully driven all along the ground through covers as Kohli moves to 66 off 48 balls. 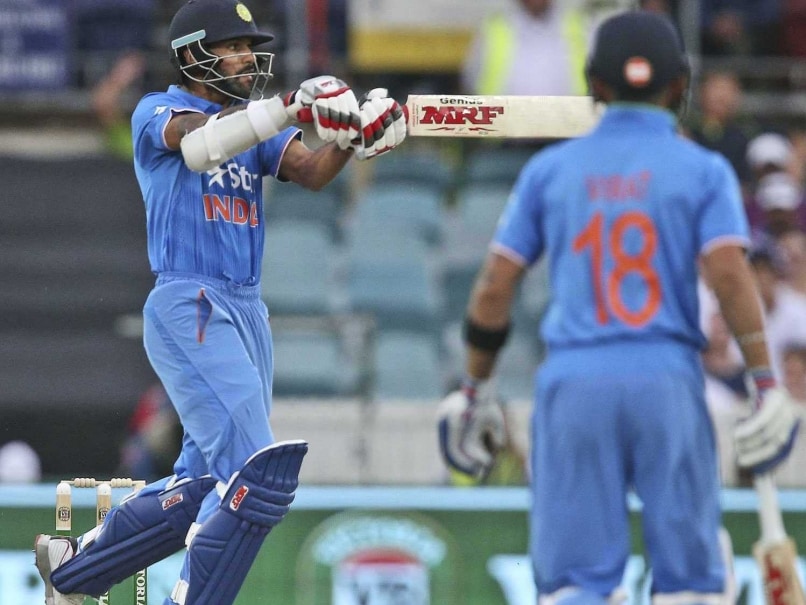 Shikhar Dhawan cuts a delivery for six in the fourth ODI between India vs Australia at Canberra.

14:41 hrs IST: Smith trying his hand at bowling now. Australians are getting desperate!!

14:28 hrs IST: Four!! Dhawan pulls again brilliantly. All angst against the southpaw is being proved wrong.Â 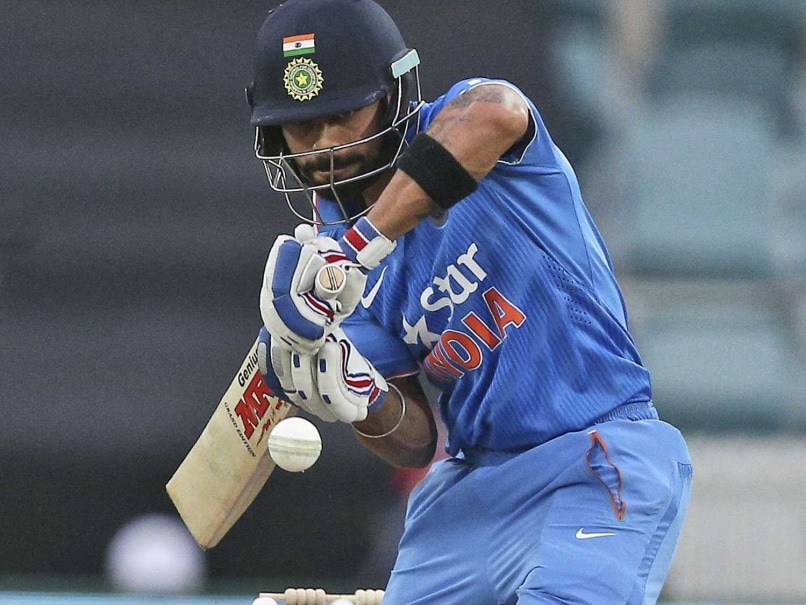 FIFTY! Dhawan smashes another boundary and that's his half century from 49 balls: https://t.co/0zWNVRAZEn #AUSvIND pic.twitter.com/b9IMYBhqi0

14:08 hrs IST: India are going along nicely. Maxwell introduced into the attack. India need to take on the part-time spinner. 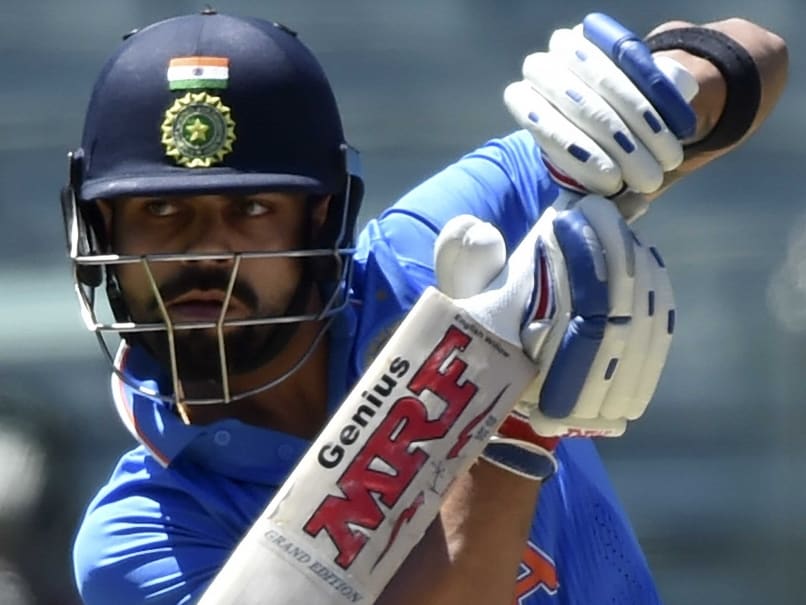 Virat Kohli averages 86 in second innings of matches that India have won.

13:58 hrs IST: Thirteen off Kohli's 24 ODI tons has come in successful chases. Hopefully for the Indian fans - the 14th is round the corner.

13:57 hrs IST: Four!! Kohli is dealing in boundaries now. Mitchell Marsh gets the treatment this time.

13:51 hrs IST: Four more!! He comes down the track and dismissed the ball from its presence to extra cover boundary. Great batting from India, especially considering Australia had 37 dot balls in their first 10 overs in this match. India are 98-1 after 12 overs.

13:50 hrs IST: Four!! Kohli founds the boundary again. And Faulkner is not happy and has a few words to say to the Indian batsman.

13:45 hrs IST: Six!! Cracking shot from Dhawan!! Came down the track and Hastings bowled it short and wide, the southpaw still went for it and deposited the ball over the point boundary.

13:34 hrs IST: Out!! Rohit is gone for 41 off 25 balls. What a tragedy for India! He was looking so good but a soft dismissal. He tried to fend at a short delivery on the leg-side from Richardson but managed to get a thin edge and Mathew Wade completed the rest. India 65-1after 8 overs.

13:31 hrs IST: Six!! What a shot from Rohit. He picked that up on the front foot and just flicked that over the square leg boundary. Fifty up for India. Great start!!

13:30 hrs IST: Five runs from the Hastings over. Rohit and Dhawan are going about their job smartly and not trying to hit every ball. India 49-0 after 7 overs.

13:25 hrs IST: Four!! Uppish drive through the covers. Luckily for Dhawan the shot was in the gap and four more to India's total. Solid start by the visitors. Need more of this though! India 44-0 after 6 overs.

13:23 hrs IST: Six!! Dhawan has picked the ball off good length and deposited over the square leg boundary. 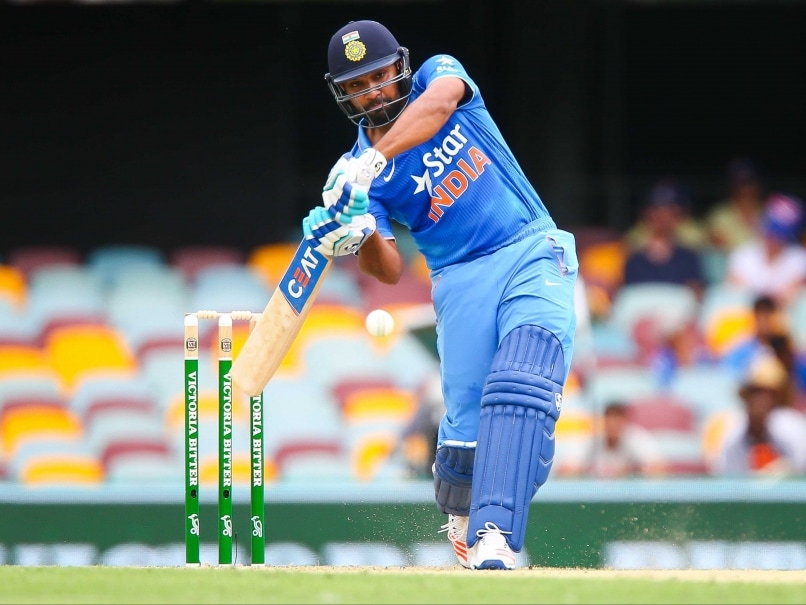 Rohit Sharma has been in great form in the ODIs and once again will be the key if India are to chase down Australia's mammoth score.

13:22 hrs IST: Great fielding from Lyon. Saved a certain boundary. Rohit played it late and must have thought he had a four but the spinner dove and saved two runs. India are 30-0 after 5 overs.

13:19 hrs IST: Lyon has been hit out of the attack. John Hastings comes into bowl his first over.

13:18 hrs IST: Another great over from Richardson. Just 2 runs off that over.

13:14 hrs IST: Four!! Dhawan drives through the covers and gets a boundary for his efforts. 17 runs off the Lyon over. Good start for the visitors. India are 24-0 after 3 overs.

13:13 hrs IST: Six!! Rohit comes down the track and deposits the ball in the mid-wicket boundary.

13:12 hrs IST: Rohit goes for the big shot but only manages to get a thick edge. Luckily for him it lands in no man's land. Talk about living dangerously!!

13:08 hrs IST: Shikhar Dhawan will need to be way more attacking than he was in the previous match.Â

13:05 hrs IST: Four!! First boundary of India's innings. Rohit Sharma sweeps brilliantly to get the visitors off the mark.

12:44 hrs IST: India haven't even started the chase and there is already some bad news. Ajinkya Rahane has four stitches on the webbing of his bat. Will bat only if needed. A tough task just tougher for the visitors!!

12:29 hrs IST: So, India will need to make a record chase, something Australia did against them in the previous three matches, if they are to win back some pride.

Comments
Topics mentioned in this article
India Cricket Team Australia Cricket Team MS Dhoni Manuka Oval, Canberra Australia vs India 2015-16 Live Cricket Score Live Blogs Cricket Live Score
Get the latest updates on IPL 2020, check out the IPL Schedule for 2020 and Indian Premier League (IPL) Cricket live score . Like us on Facebook or follow us on Twitter for more sports updates. You can also download the NDTV Cricket app for Android or iOS.