Yuvraj Singh and Suresh Raina are two of India's best left-handers going into the World Twenty20, according to captain Mahendra Singh Dhoni 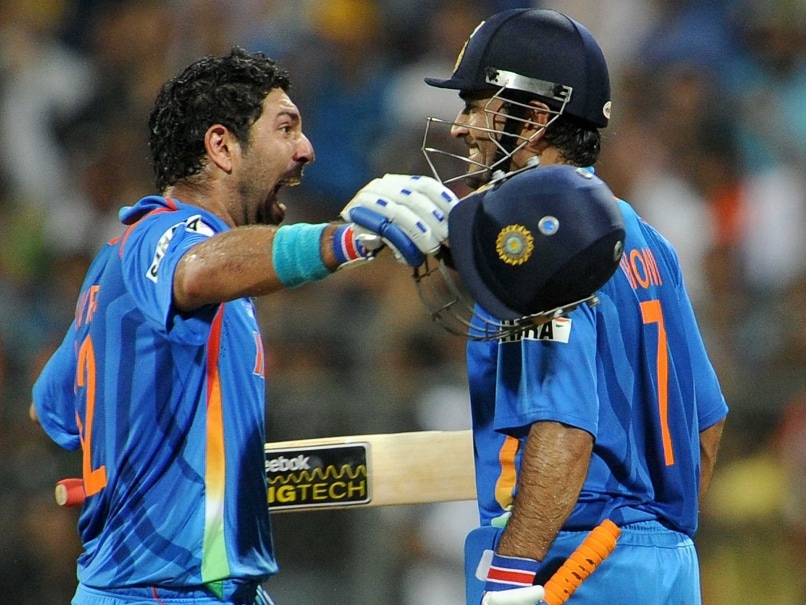 Yuvraj Singh is the best option for No.5 slot, according to Mahendra Singh Dhoni© AFP
Sydney:

Yuvraj Singh's cameo in the Sydney Twenty seems to have impressed India captain Mahendra Singh Dhoni. He expects that the veteran left-hander would only get better as he plays more and more matches in the lead up to the ICC World Twenty20. (Sydney T20I: Rohit Sharma, Virat Kohli, Suresh Raina Guide India to 3-0 Series Sweep)

The skipper also termed the team combination as the right mix of players going into marquee event. (Yuvraj Singh Must Be Part of Playing XI For ICC World Twenty20: Sunil Gavaskar)

"I think we have the right mix. Also, Yuvraj can just go and express himself batting at No 5. There will be less pressure on him and as he plays more and more games he will just open up more. I have never believed in a set batting order and according to situations and bowlers, we might need to create a gap in between the two left-handed batsmen (Yuvraj and Suresh Raina). At the moment,this seems like what will be a very good batting line-up,"Â  the skipper exuded confidence in the batting line-up.

Dhoni also said that Raina is the only player in this set-up who has done well batting at No 3 for Chennai Super Kings as well as batting at Nos 5 or 6 for India.

"To an extent, we are rewarding IPL performances. Raina has scored the most number of runs at No 3 for eight IPL seasons now, and at the same time in one of the World T20s he batted at No 3 for us and he got the hundred too. But there were others who could also do a similar job in that slot but there was no one else who could bat at Nos 5 or 6.

"The conditions from now onwards will also be similar to what we get during the IPL so we want to cash in on that aggression," said the skipper.

Harbhajan may get a look-in

The skipper also refused to put a deadline on when he can think of fielding senior pro Harbhajan Singh, who did not get a chance in the playing XI but conditions back in the sub-continent might make it easier to play the 35 year old off-break bowler.

"The conditions here are very different to the sub-continent conditions where we will play a lot of T20 cricket before the World T20. It is important to have a back up for every individual and not just cover for one particular situation.

"So it will be a bit hard for him to come into eleven straightaway, but we may look to alter the combination depending on the opposition. It is more important to select a side where everyone is eligible to play and they are able to play in multiple roles. We might look to play him later on but we also want to play our best eleven and win games to see what is our best combination."

Bumrah - find of the series

Dhoni is highly impressed with young Gujarat pacer Jasprit Bumrah. "At the end of the day, we have won and I am happy it's a comprehensive victory. Winning 3-0 against Australia in Australia is always a big one. But it is more about how the team is looking rather than just from a captain's view.

"We have won the series over here but it is important to look at the bigger picture. Jasprit Bumrah has potential and is looking very good indeed. Even today he bowled the yorkers really well."

Comments
Topics mentioned in this article
MS Dhoni Yuvraj Singh Australia vs India 2015-16 Cricket
Get the latest updates on Fifa Worldcup 2022 and check out  Fifa World Cup Schedule, Stats and Live Cricket Score. Like us on Facebook or follow us on Twitter for more sports updates. You can also download the NDTV Cricket app for Android or iOS.