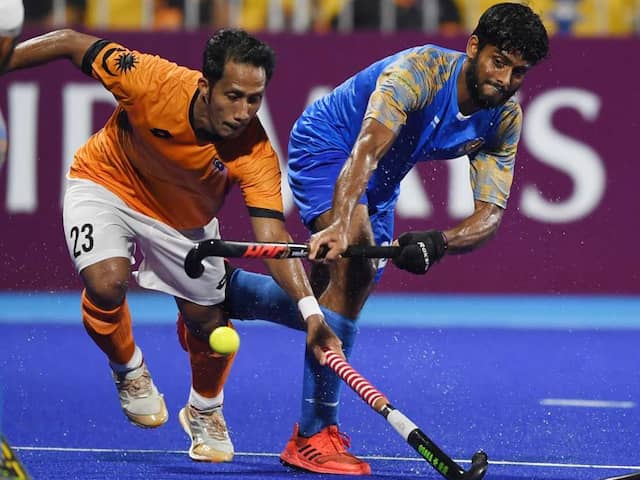 The Indian men's hockey team's dreams of making the Asian Games 2018 were shattered after India lost 6-7 to Malaysia in the penalty-shootout after the match ended 2-2 in regular time. The third quarter saw three goals but it was India who held a slender 2-1 lead over Malaysia in the Asian Games 2018 men's hockey semi-final match. Harmanpreet Singh and Varun Kumar scored the goals for India while Malaysia's Faisal Sari was on target. The Indian men's hockey team and Malaysia remained goalless at halftime in the semi-final of the Asian Games 2018. Nothing separated both these teams as the first two quarters saw less clear-cut chances. India counted themselves lucky in the first quarter when their timely video referrral saw a Malaysian goal decision overturned. India have displayed dominant performances till now at the Asiad by comprehensively beating Hong Kong (26-0), Indonesia (17-0), Japan (8-0) and Sri Lanka (20-0) and Korea (5-3) on their way to the semi-final. India, reigning Champions, will aim to continue their fine form and get past World No. 12 in the semis. In the head-to-head record, India hold an upper hand against Malaysia. They have played 101 matches out of which 70 were won by India and 13 by Malaysia. The remaining 18 matches were draws. (MEDAL TALLY)

Earlier this year, India had defeated Malaysia 2-1 in the Commonwealth Games to enter the semi-finals. India's SV Sunil and Harmanpreet Singh produced brilliant individual performances in the Commonwealth Games 2018 quarter-finals against Malaysia to help India clinch victory by a narrow margin. Ranked fifth in the world, the Indian men's hockey team have won 14 medals in the Asian Games so far. The medals include, 3 gold, 9 silver and 2 bronze medals. India had won gold at Incheon, South Korea, in 2014, beating arch-rivals Pakistan on penalties.

18:20 IST: Thank you for staying with us for the live commentary.

18:05 IST: MISSED! SV Sunil misses and India are out of the final after losing to Malaysia. India lose to Malaysia in penalty shoot-out, the match had ended 2-2 in normal time

17:52 IST: NO  GOAL! Mohammed Azwan hits over the bar. We move into the final round. Whoever scores now enters the final.

17:51 IST: NO GOAL! Faisal Sarri is next for Malaysia. Misses it, Sreejesh saves it. Fantastic stuff by the Indian keeper. 1-1 to both teams after three penalty strokes each.

17:50 IST: NO GOAL! Dilpreet Singh misses it. India lose the chance to go up.

17:43 IST: No goal! Manpreet Singh goes first and he abstructs the Malaysian keeper.

17:36 IST: GOAL! Penalty corner for Malaysia. The Indian team needs to see this off but they can't. Malaysia equalise. India 2-2 Malaysia

17:34 IST: Can the Malaysians conjure up some magic or India are headed to the Asiad finals?

17:30 IST: Good defending by India. Both the teams looking tired. The winner of this match will play the victors of Japan vs Pakistan clash. India are back to 11 men.

17:26 IST: Mandeep Singh is all alone but he seems to have gone out of ideas on the counter attack. He had no one to pass the ball to. India 2-1 Malaysia

17:24 IST: Indians are 2-men down at the moment. Mandeep and Akashdeep need to defend deep before their two teammates rejoin.

17:21 IST: Surender Kumar gets a green card for a foul. Pushes Malaysia's number 23. India are two men less on the field.

17:20 IST: SAVE! Sreejesh makes a decent save for India. Lovely interception by Manpreet Singh after his keeper's save. Manpreet's performance has been top notch today.

17:19 IST: Penalty corner for Malaysia. India don't have a referral.

17:08 IST: GOAL! Malaysian keeper to the rescue. Malaysia on the counter and they score. They equalise. Number 10 Faisal Sari gets Malaysia back into the game. India 1-1 Malaysia

17:07 IST: India get another penalty corner.

17:06 IST: Surender Kumar barged into the Malaysian forward. This looks painful. Luckily there is no serious injury.

17:03 IST: India are growing in confidence after their goal. This has been an entertaining hockey match for neutrals. 9 minutes to go for the third quarter to go. India 1-0 Malaysia

17:01 IST: GOAL! Harmanpreet Singh finds the net after India's penalty corner. Akashadeep's ejection gave the goal scorer a brilliant opportunity to score from a drag flick. This is his 9th goal of the tournament. India 1-0 Malaysia

16:58 IST: CHANCE! Miss was narrowly wide for Malaysia. Lucky escape for India. Hasan given too much room in their penalty box.

16:58 IST: Change of ends. Malaysia in their orange kit playing from right to left.

16:45 IST: Nothing separates these two sides yet. Another penalty corner for India.

16:41 IST: Manpreet turning and twisting but the Malaysian defence are rock solid at the moment.

16:35 IST: Mandeep with the ball at the right flank. Akashdeep was there but no real danger for Malaysia. 6 minutes left for the second quarter to end.

16:34 IST: India on the counter attack. Harmanpreet to Akashdeep and Indians get another penalty corner.

16:32 IST: Attempted through ball and India survive. Sreejesh narrowed their angle really well to avert any danger. Malaysians are dangerous in their offensive play. 10 minutes to go for the second quarter.

16:24 IST: SAVE! Fantastic save Sreejesh again. Malaysia are dominating the closing stages of the first quarter.

16:18 IST: Godden opportunity for Akashdeep Singh. Malaysia survive. It hit the foot of the Malaysian defender but India have another penalty corner. Less than 3 minutes to go for the first quarter.

16:15 IST: PENALTY CORNER FOR INDIA and a yellow card for the Malaysian player Muhammed Husain.

16:11 IST: SV Sunil makes a lovely run on the right flank. The Indians are charged up at the moment. India 0-0 Malaysia

16:06 IST: GOAL DISALLOWED! Malaysia take the lead after a fine finish. Referee is checking some foul. Video referral taken by Rupinder Pal Singh and the goal decision is overturned.

16:06 IST: FOUL! Malaysia have a chance to test the Indian defence.

16:05 IST: The Indians looking to press quite high of the field. Manpreet Singh dictated play at the middle of the park.

16:01 IST: PENALTY CORNER! India get their first penalty corner. No goal. India on the charge in the early minutes.

16:00 IST: The first quarter of the 2018 Asian Games men's hockey semi-final clash between India and Malaysia begins. India playing from left to right.

16:52 IST: We are few minutes away from the much-anticipated clash between India and Malaysia.

16:46 IST: India are unbeaten in this tournament.

15:36 IST: The playing XI of India has been announced.

Here is the Starting XI of the Indian Men's Hockey Team who will play their Semi-Final match at the @asiangames2018 against Malaysia at 4 PM (IST) on 30th August 2018. Watch the action LIVE on @SPNSportsIndia and @SonyLIV.#IndiaKaGame #AsianGames2018 #INDvMAS pic.twitter.com/bMVXJMWKPZ

15:08 IST: Before we get into the match mood, you can read the match preview here.

Here is how the Indian Men's Hockey team has performed against Malaysia in the previous editions of the Asiad. The team will eye another win as they play Malaysia again in the Semi-Final of the @asiangames2018 on 30th August.

15:01 IST: Hello and welcome to the live blog updates of the men's hockey semi-final clash between India and Malaysia.

The Indian Men's Hockey Team will take on Malaysia in their decisive Semi-Final clash of the @asiangames2018 in Jakarta & Palembang on 30th August. Tune in to @SPNSportsIndia and @SonyLIV at 4 PM (IST) today to watch the action LIVE! #IndiaKaGame #AsianGames2018 #INDvMAS pic.twitter.com/SMEM5CZpGl

A successful title defence at the 18th Asian Games will also secure India an automatic spot at the 2020 Olympics in Tokyo. Malaysia, on the other hand, finished fourth in the Asian Games. Malaysia's last podium finish in the Asian Games came in 2002, where they clinched a bronze medal. Going by the rankings and previous encounters, it should be an easy outing for India.

Comments
Topics mentioned in this article
India Malaysia Asian Games 2018 Hockey
Get the latest Cricket news, check out the India cricket schedule, Cricket live score . Like us on Facebook or follow us on Twitter for more sports updates. You can also download the NDTV Cricket app for Android or iOS.