Bajrang defeated Takatani Daichi of Japan 11-8 in the summit clash to claim the top honours. 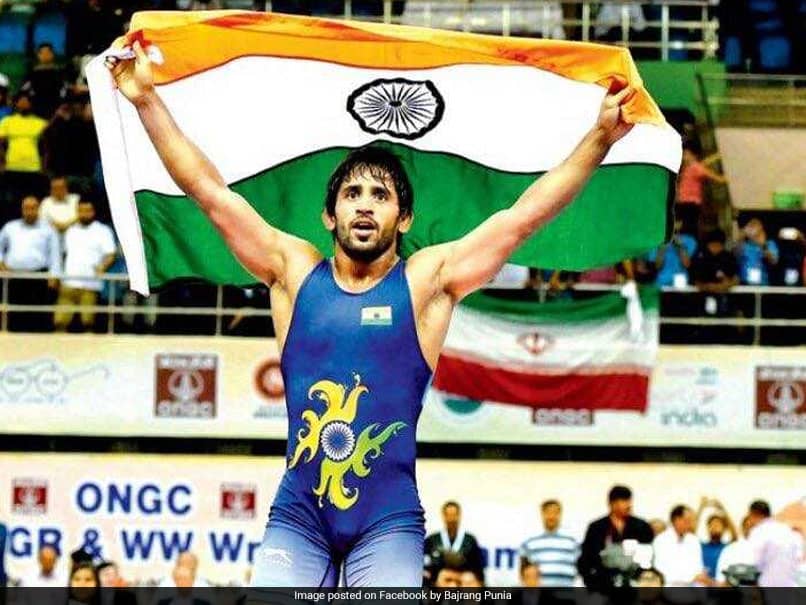 A dominating Bajrang Punia opened India's gold medal account at the 2018 Asian Games, bringing smiles and relief to the Indian camp which was jolted by the early exit of star wrestler Sushil Kumar here today. An in-form Bajrang won his maiden Asian Games gold in the 65kg category but a 'rusty' Sushil lost his last chance to add an Asiad gold to his collection of medals after losing his qualification bout 3-5 to Bahrain's Adam Batirov in the 74kg category. Bajrang came into the Games after winning three tournaments -- Commonwealth Games, Tbilisi Grand Prix and Yasar Dogu International -- and carried on with his superlative show here. Such was his domination that the 24-year-old from Haryana won all his bouts, until the final, by technical superiority.

In the final, he was tested by Japan's Takatani Daichi but Bajrang held his nerves to prevail 11-8 in an exciting battle. He raced to a 6-0 lead but the Japanese kept at it and put Bajrang under immense pressure.    Bajrang emulated his mentor Yogeshwar Dutt, who won gold in the last edition and is now one of the few Asiad gold medal winners in wrestling.

The biggest blow though came when two-time Olympic medallist Sushil, who was exempted from Asiad trails, lost tamely. Sushil, winner of a bronze at the 2006 Doha edition, was competing at the Games after skipping the last two editions. The Indian led 2-1 after the first period with a takedown but the Bahraini made a strong comeback to silence the Indian fans.

Sushil himself was surprised with his defeat.

"I did not expect this. I did not have any big competition under my belt and that was the main reason for my defeat. But it's part of the sport. I will train harder and come back," said Sushil.

"I was not passive. I tried. It was just that there was not much time between CWG and Asian Games, so I could not compete at bigger and better events to prepare."

The London Olympics silver medallist created two opportunities to score in the second period but could not convert them while Batirov did not miss his chances. He led 3-2 with a takedown and then pushed the Indian out for a win. For Sushil to remain in the medal contention, Batirov needed to make the final. But the Bahraini lost his quarterfinal bout 2-8 to Japan's Yuhi Fujinami, resulting to Sushil's exit. Sandeep Tomar, who was the last wrestler to book a berth for the Games through trials, showed immense promise before crashing out in the quarterfinals.

He won his second round 12-8 against Turkmenistan's Rustem Nazarov but was outwitted 9-15 by Iran's Reza Atrinagharchi. Tomar put up a brave fight and was locked 6-6 with his tactically superior Iranian rival. In the second period, though, Reza just ran away with the bout with his big-scoring moves. The Iranian later lost his semifinal bout, which resulted to Tomar crashing out.

Khatri was outplayed 0-8 in the 97kg by Uzbekistan's Magomed Ibragimo. Khatri remained passive throughout the bout and never made any attacking move. In the 86kg, Pawan Kumar made a rousing start by blanking Heng Vuthy of Cambodia 8-0 but later lost to reigning world champion Hassan Yazdani Charati of Iran by Technical Superiority. Yazdabi is the gold medallist at Rio Olympics, apart from winning three World Cup gold medals.

Comments
Topics mentioned in this article
Wrestling Asian Games 2018
Get the latest updates on IPL 2020, check out the IPL Schedule for 2020 and Indian Premier League (IPL) Cricket live score . Like us on Facebook or follow us on Twitter for more sports updates. You can also download the NDTV Cricket app for Android or iOS.