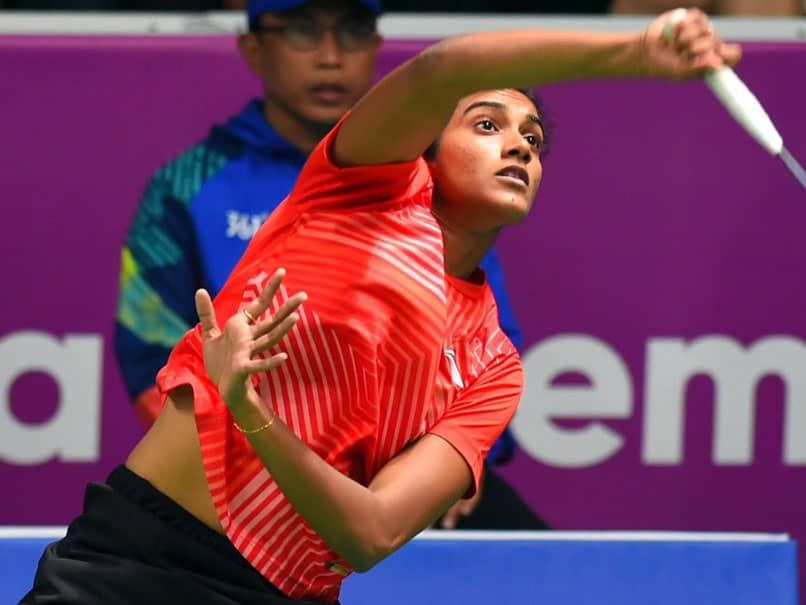 PV Sindhu becomes the 1st Indian to reach the final of an Individual event at Asian Games .© PTI

PV Sindhu outclassed second seed Akane Yamaguchi of Japan 21-17, 15-21, 21-10 to secure a place in the women's singles badminton final at the Asian Games. In the process, the 23-year-old became the first Indian to reach the final of an Individual event at the Games. Sindhu will take on world no. 1 Tai Tzu Ying in the final tomorrow. Earlier, Saina Nehwal lost 17-21, 14-21 to world number one Tai Tzu Ying and will take home a bronze medal at the 18th Asian Games in Indonesia. The ace Indian shutter was no comparison to Chinese Taipei's Tai Tzu Ying, who was at her best to beat Saina in straight games.

Olympic medallists PV Sindhu and Saina Nehwal headed for a gold medal showdown at the 18th Asian Games after their quarterfinal victories ensured India's first ever women's singles medals at the Continental event. First it was London bronze medallist Saina, who ended a 36-year-old wait for an individual medal after locking at least a bronze following a 21-18 21-16 win over world number five Ratchanok Intanon in a 42-minute quarterfinal. Rio silver medallist Sindhu then fought past world number 12 Nitchaon Jindapol 21-11 16-21 21-14 in the other quarterfinal. This is the first time Indian women singles shuttlers are assured of a medal in Asian Games. And India will have the first singles medals in badminton after the 1982 Asiad when Syed Modi won the bronze. (MEDAL TALLY)

Sindhu becomes the first Indian to reach the final of an Individual event at the Asian Games .

Sindhu will take on world no. 1 Tai Tzu Ying in the final tomorrow.

12:37 IST: Another unforced error by Akane Yamaguchi. PV Sindhu now just 3 points away from securing her place in the finals

12:32 IST: Sindhu might be leading but Yamaguchi will not go down without a fight.

Yamaguchi goes down on her knees after the 41-stroke rally. Sindhu takes a 10-5 lead now

12:23 IST: Both the players are playing aggressive badminton but Sindhu takes a five-point lead in the third game.

12:16 IST: After a shoddy display in the first game, Yamaguchi is putting her best in the second game. The Japanese leads 19-15 now.

12:14 IST: After taking a four-point lead in the second game, Sindhu now trails by 4 points.

12: 07 IST: Yamaguchi equalises and suddenly takes a one-point lead at the mid-break. It 10-11 for Sindhu now.

12:02 IST: Akane Yamaguchi is giving away too many easy points to PV Sindhu by committing unforced errors. The Indian now leads 8-6.

11:56 IST: Just like the first game, the second one has begun on an even note. Both the players are trying  to put pressure on each other to open up a big lead.

11:54 IST: The second game gets underway

11:50 IST: Aggressive display by Sindhu as she takes a four-point lead.

11:47 IST: Sindhu's 5-point lead is back as Yamaguchi commits too many errors. Quite a sloppy show by the Japanese player.

11:40 IST: A close first game is on right now. Both Sindhu and Yamaguchi are not letting even a point slip by.

11:35 IST: Good start by Sindhu in the first game as she fought back after conceding an early lead.

11:04 IST: Saina Nehwal for the first time in the match takes a 13-12 lead against Tai Tzu Ying. Can she turn the match around from here?

10:57 IST: Saina Nehwal draws level at 6-6 in the second game with a powerful smash down the line. Saina is trying to make a comeback in the game but Tai Tzu Ying is not giving any such opportunities.

10:54 IST: Saina Nehwal trails Tai Tzu Ying 5-1 in the second game. The Chinese Taipei shuttler is running away with the game, she looks confident.

10:47 IST: Saina Nehwal has reduced the five-point gap to a single one. She trails 15-16 against Tai Tzu Ying.

10:44 IST: After the mid-break, Tai Tzu Ying opens up a massive five-point lead against Saina. The Indian trails 10-15 against Tai Tzu Ying.

10:39 IST: For the first time in the first game, Saina draws level at 8-8 against Tai Tzu Ying. The Indian is showing great tenacity.

10:34 IST: Saina Nehwal gets her first point of the game. She trails 1-3 against Tai Tzu Ying.

10:30 IST: Minutes away from a mouth-watering contest between Saina Nehwal and Tai Tzu Ying. Stay tuned.

10:18 IST: Saina Nehwal is in great form. On her way to the semifinals, Saina Nehwal beat Soraya Aghaeihajiagha of Iran 21-7, 21-9 in a match that lasted just 27 minutes. Following that, in the pre-quarters, Saina Nehwal dispatched Fitriani Fitriani 21-6, 21-14. In the quarters, the Indian shuttler made a stunning comeback to win the first game 21-18 and then took the second game 21-16 to set up semifinal clash with Tai Tzu Ying.

10:10 IST: Hello and welcome to the live blog of the women's semifinal match between Saina Nehwal and World No.1 Tai Tzu Ying.

The last Indian to win an individual medal at the Asian Games was legendary Syed Modi, who won a men's singles bronze, way back in 1982 at New Delhi. India has won eight badminton medals at the Asian Games and six of them are in team events and one in men's doubles. Saina and Sindhu had clashed at the finals of the Commonwealth Games at Gold Coast in April with the former emerging victories. While Sindhu ran away with the first game, Jindapol made it little tough for the Indian in the second game and thrice held the lead. Trailing 13-16, Sindhu found winners on either side of the court to make it even but Jindapol again created a four-point lead with very calculated smash shots and won the game easily to roar back into the contest.

In the decider, Sindhu trailed 4-7 with Jindapol spraying winners but the Indian won seven points in a row to give herself a four-point cushion. There was no change in script after that as Sindhu ran away with the match. Earlier, Saina fell behind 3-8 at the beginning but found a way to beat the Thai player, whom she had beaten at the recent World Championship in Nanjing and also at the Indonesian Master at the same venue.

Comments
Topics mentioned in this article
Saina Nehwal PV Sindhu Asian Games 2018 Live Blogs Badminton
Get the latest updates on India vs Australia Series, check out the India vs Australia Schedule for 2020-21 and Ind vs Aus live score . Like us on Facebook or follow us on Twitter for more sports updates. You can also download the NDTV Cricket app for Android or iOS.