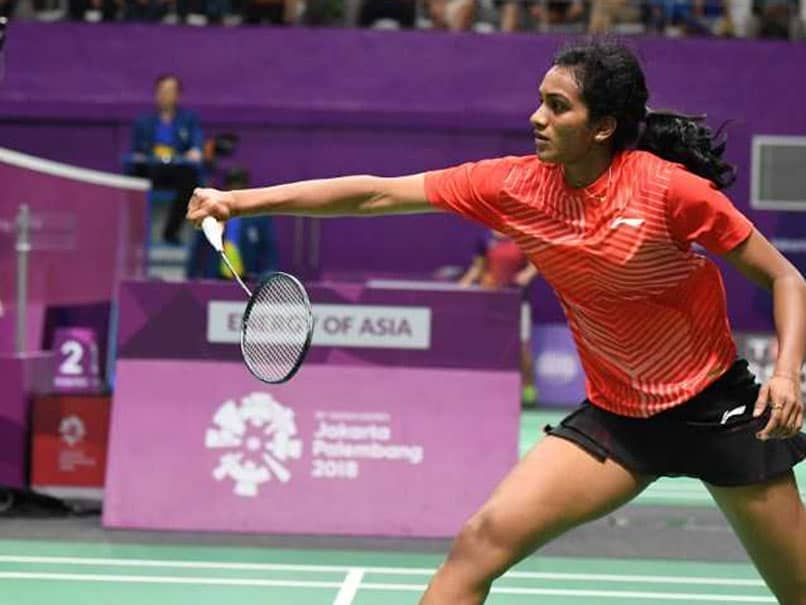 Saina Nehwal defeated Ratchanok Intanon, while PV Sindhu beat Nitchaon Jindapol to enter the women's singles quarterfinals at the 2018 Asian Games on Sunday. After a disappointing show put up by the Indian men in the singles badminton event of the 2018 Asian Games, all eyes will be on PV Sindhu and Saina Nehwal in the women's singles quarterfinals on Day 8. After surviving a scare in the round of 32 clash against Vietnam's Thi Trang Vu, Olympic and World Championship silver medallist Sindhu thrashed Indonesia's world number 22 Gregoria Mariska Tunjung 21-12, 21-15 in the pre-quarters on Saturday. Commonwealth Games gold medallist Saina dispatched another local girl Fitriani Fitriani, ranked 40th, 21-6, 21-14.

Saina will face Thailand's fourth seed Ratchanok Intanon, while Sindhu will take on Thailand's Nitchaon Jindapol to book their respective slots in the semifinals. Going into the quarters, both Sindhu and Saina have been in sublime touch and will be looking to add to their medal tally in Indonesia. However, India's biggest medal hope in badminton is undoubtedly PV Sindhu, who at the age of 23 is already one of the top players in the women's singles circuit.

14:53 IST: Sindhu has a smile on her face. She is just two points away from entering semifinals and assuring herself a medal.

14:51 IST: Another forced error from  Nitchaon Jindapol. Point for Sindhu.

14:50 IST: PV Sindhu has a three-point lead against Nitchaon Jindapol.

14:35 IST: Nitchaon Jindapol stars off brilliantly in the third and final game. She leads PV Sindhu 4-2.

14:28 IST: Three back-to-back points for Sindhu. She draws level to 16-16. What a comeback from the Rio Olympics silver medallist.

14:25 IST: Nitchaon Jindapol has a two-point lead against PV Sindhu. Can the Indian make a comeback?

14:17 IST: Brilliant comeback from Nitchaon Jindapo. She wins back-to-back points and takes a 8-7 lead in second game vs Sindhu.

14:05 IST: Sindhu wins two back-to-back points. She has a eight-point lead in the opening game vs Nitchaon Jindapol.

13:59 IST: PV Sindhu leads 11-7 at mid-break in the opening game against Nitchaon Jindapol.

13:57 IST: Two back-to-back points for Sindhu. She has a three-point lead against Nitchaon Jindapol in the opening game.

13:50 IST: Wait is over!! India's star shuttler PV Sindhu is in action against Nitchaon Jindapol.

13:17 IST: Saina made history by giving India their first Asiad women's singles individual medal. This will also be the first individual medal since Syed Modi's bronze in 1982.

12:55 IST: Both shuttlers are ready for the second game. Can Saina Nehwal register a straight game win to enter the semifinals?

12:46 IST: Great net play from Ratchanok Intanon. She has won back-to-back points. She leads 16-10 in the opening game.

12:41 IST: Forced error from Ratchanok Intanon. Saina gets a point. the Indian still trails 7-13 in the opening game.

12:36 IST: Excellent start from Intanon. She leads 8-3 against Saina in the opening game.

12:33 IST: Intanon has taken a four-point lead against Saina early in the game.

12:30 IST: The quarterfinals match between Saina and Ratchanok Intanon starts.

However, Sindhu is yet to win a singles title this year, although she made it to four finals in this season - India Open, Commonwealth Games, Thailand Open and BWF World Championships. In fact, she lost a close Commonwealth Games final to compatriot Saina Nehwal and brought home a silver medal. Her most recent loss was against Carolina Marin in the final of the BWF World Championship, her fourth loss in the summit clash of a tournament this year. It was also her second defeat in the final of World Championships as she had lost an epic final against Nozomi Okuhara at Glasgow last year.

Comments
Topics mentioned in this article
PV Sindhu Saina Nehwal Asian Games 2018 Live Blogs Badminton
Get the latest updates on India vs Australia Series, check out the India vs Australia Schedule for 2020-21 and Ind vs Aus live score . Like us on Facebook or follow us on Twitter for more sports updates. You can also download the NDTV Cricket app for Android or iOS.