The Indian openers have been in terrific form and have given India a solid foundation throughout the tournament. 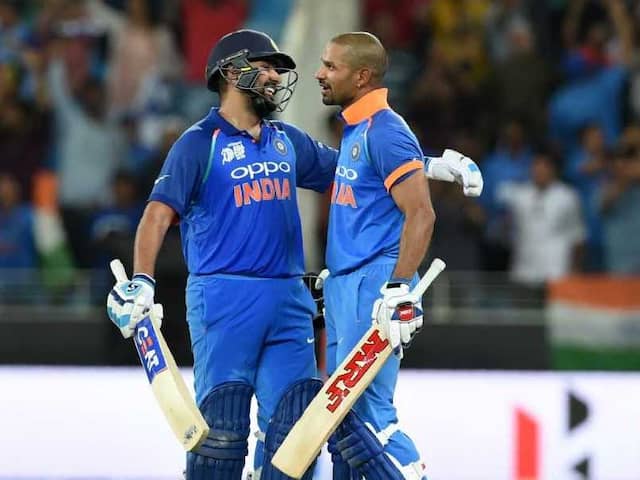 Team India openers Rohit Sharma and Shikhar Dhawan displayed impeccable batting skills as they helped the men in blue breeze past arch-rivals Pakistan in their Asia Cup 2018 Super Four clash by nine wickets on Sunday. The Indian opening duo has been in terrific form and has given India solid foundations throughout the tournament. Impressed by the openers' stellar show in the tournament, India head coach Ravi Shastri, in a video posted by the BCCI Twitter handle, spoke to them about the massive 210-run partnership against Pakistan, their on-field rapport and how do they manage to score runs so freely.

The Indian openers looked quite relaxed while sending Pakistan bowlers on a leather hunt in the middle. Rohit Sharma revealed how he, along with Dhawan, managed to do that.

"The first five overs, he (Dhawan) is all about cricket talks. But after that, we are just like our old selves. We talk about different stuff. But we always talk about where we need to take singles, rotate strikes and score runs," Sharma said.

When Shastri asked the Indian openers about how they tormented the Pakistan bowling attack, Dhawan said: "When we first went to bat, we knew they had a quick pace attack. We knew we had to stay in the middle for 10-15 overs to get rid of the new ball. Once we were set, we were enjoying each other's company. When Rohit was being aggressive, I was taking the back seat and when I was aggressive, Rohit was taking the back seat.

"The good thing is that we have played so many games together that we don't say much, we work on autopilot mode which is a great thing," Dhawan said with a smile.

Sharma and Dhawan frustrated the Pakistan bowling department by keeping them at bay and not taking unnecessary risks. Talking about how they kept the scoreboard ticking, the Indian captain said: "We do understand that the new ball is very important and completely understand the threat Pakistan pacers possess with the new ball. We spoke about how we need to rotate the strike in the middle, keep ticking the scoreboard. That actually changes the bowlers' mindset as to where to bowl and what to do.

"Once we get past the 10-over mark it is important that we don't throw the game away because it is always tough for the new batsman to come and start scoring," the right-handed batsman remarked.

With their berth secured in the Asia Cup 2018 final, India will be facing Afghanistan in their last Super Four clash on September 25.

Rohit Sharma Asia Cup 2018 Cricket
Get the latest Cricket news, check out the India cricket schedule, Cricket live score . Like us on Facebook or follow us on Twitter for more sports updates. You can also download the NDTV Cricket app for Android or iOS.