Standing in first slip, David Warner was airborne when he grasped the catch as Joe Root came down the wicket to Nathan Lyon and tried to whip the off-spinner through the leg side. 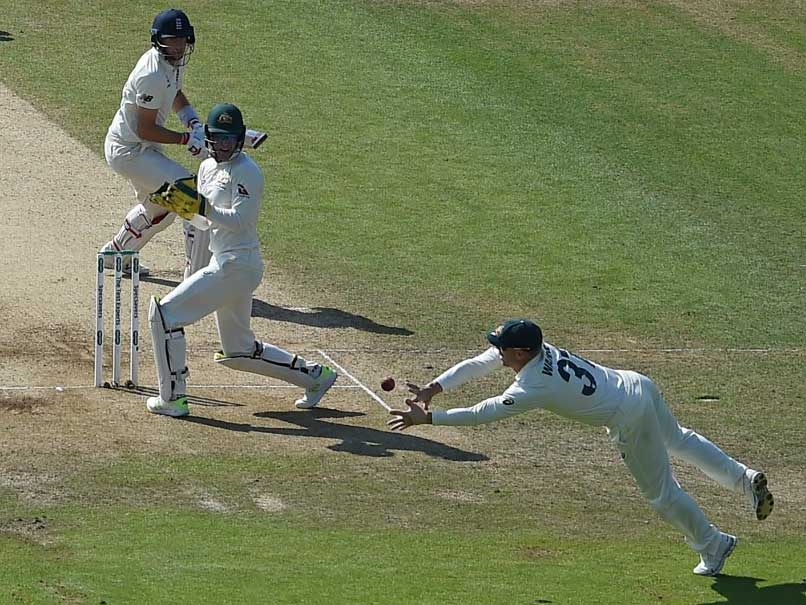 David Warner dived full length and completed the catch with both hands.© AFP

David Warner took five catches before Day 4 in the ongoing third Ashes Test at Headingley in Leeds but none were as spectacular or as important than the one he took on the fourth day to dismiss England captain Joe Root. Standing in first slip, David Warner was airborne when he grasped the catch as Root came down the wicket to Nathan Lyonand tried to whip the off-spinner through the leg side. Lyon's delivery deflected off Root's back leg, looped over Australia captain and wicketkeeper Tim Paine, with Warner diving full length and completing the catch with both hands.

Brilliant catch from Warner and the captain goes for 77.

Joe Root managed to add just two runs to his overnight score before he was dismissed for 77 to bolster Australia's chances of completing an Ashes-clinching win on the fourth day.

England were now left looking to all-rounder Ben Stokes and new batsman Jonny Bairstow, like Root playing on his Yorkshire home ground, as they tried to level this five-match series at 1-1.

That England had any chance at all of a win, even a remote one, was remarkable given they had been dismissed for just 67 -- their lowest Ashes total since 1948 -- in the first innings.

Another sun-drenched day in Leeds saw England resume on 156-3, with Root 75 not out and Stokes two not out after facing 50 balls on Saturday.

They had yet to add to their overnight score when Stokes missed an a pull off a Josh Hazlewood bouncer that smashed into his helmet, between the grille and peak, with the stem guard protecting his neck flying off at the back.

The all-rounder, who made an unbeaten century in the drawn second Test at Lord's, was cleared to bat on, however.

Eventually Root scored England's first run of Sunday's play off the 26th ball of the day only to be dismissed soon afterwards.

If Australia win this match they will retain the Ashes at 2-0 up with two to play having thrashed England by 251 runs in the series opener at Edgbaston.

Headingley, Leeds The Ashes 2019 Cricket England vs Australia, 3rd Test
Get the latest updates on ICC Women's Cricket World Cup 2022 and IPL 2022, check out the Schedule , Live Score and IPL Points Table. Like us on Facebook or follow us on Twitter for more sports updates. You can also download the NDTV Cricket app for Android or iOS.