FIFA World Cup 2018, Highlights, Japan vs Senegal: Both teams shared a point each as an exciting Group H tie ended in a 2-2 draw. 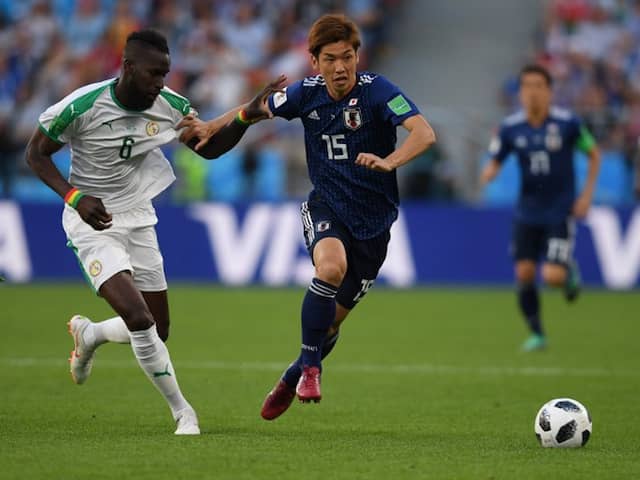 An exciting Group H match between Japan and Senegal ended in a 2-2 draw at the Ekaterinburg Arena on Sunday evening. Moussa Wague, 19 year-old, put Senegal gave Senegal a 2-1 in the 71st minute and it seemed Senegal would've won the match. However, a composed strike from Keisuke Honda in the 78th minute kept Japan in the competition. The rest of the 12 minutes saw both teams trying to score a winner but neither of them could convert. Earlier, Japan and Senegal were locked at 1-1 at first-half. Senegal were the better side in the first-half as compared to Japan but a moment of inspiration from Takashi Inui in the 34th minute breathed life into the Japanese side. Senegal took control of the game from the word go and created chances with multiple insertions in the Japanese defence. A moment of error by the Japanese keeper in the 10th minute saw Sadio Mane find the back of the net. However, Japan continued to fight for the ball and kept Senegal on their toes. Takashi Inui's wonder strike in the brought back Japan in the game that was slowly going out of their grasp. The goal provided the footing Japan was looking for as they slowly gained control of the game. Victory for either side on Sunday in Yekaterinburg would virtually seal a place in the last 16 in Russia. (Highlights: Japan vs Senegal)

22:23 IST: Thank you for joining us for the live blog. Please follow Poland vs Colombia Live blog here.

22:14 IST: Last few minutes to go in the second half and both the teams are going for the kill.

22:05 IST: 78th minute -- GOAL!! Keisuke Honda gets the vital equaliser for Japan. This time the Senegalese goalkeeper is to be blamed as he fumbles during clearing a simple cross. Ndiaye came for a cross but flapped at it as the ball was played back. Honda was lurking around and put the ball in the back of the net. | Japan 2-2 Senegal.

21:58 IST: 71st minute -- GOAL!! Moussa Wague, 19 year-old, has put Japan in lead again. Wague fires the low cross by Sabaly into the back of the net from a difficult angle. Can Japan get yet another equaliser?

21:55 IST: Inui gets booked and Japan get a free-kick. The Japanese clears the poorly orchestrated free-kick.

21:51 IST: 63rd minute -- Japan are creating far more chances are and they look dangerous. Osako, on the counter, makes a cheeky backheel pass to Inui, who curls the ball the same way he did in the first-half. However, this time the ball hits the the crossbar. That was so, so close!!

21:46 IST: 61st minute -- Japan seize on a poor pass by Badou Ndiaye and counter. Osako runs and places himself for a beautiful low cross but connect his foot with the ball. This miss will haunt Osako.

21:43 IST 55th minute -- Senegal are giving their everything now. Two crosses cause panic in the Japanese box as they lose possession to Niang just outside the box. He shoots but the Japanese keeper blocks the shot with ease.

21:37 IST: Five minutes into the second-half and no clear cut chances have been made by either of the teams. However, Japan are looking far more confident as compared to the first-half.

21:32 IST: Second-half begins! No substitution for either of the teams.

21:13 IST: Two minutes are left in the first-half. Both teams are trying hard to take a lead.

21:09 IST: Haraguchi tries, just outside the box, takes a shot at the target but the ball flies miles over the crossbar. That equaliser has suddenly pumped the Japanese with energy.

21:04 IST: 34th minute --  GOAL! And Japan are back in the game. A long pass was brilliantly collected by Yuto Nagamoto in the box, who in turn passes the ball to Takashi Inui, who dribbles across few Senagalese players and curls the ball past the keeper. Wonderful, wonderful strike that.

21:00 IST: 30 minutes are up -- Senegal have control of the game and are in driver's seat. Japan are starting to grow in the game but still have to long way to go.

20:23 IST: 22nd minute -- Wague, on the counter, makes a run with the ball down the right flank, crosses the ball in the box where Sarr tries a half-volley but the keeper blocks the ball. Senegal are looking dangerous.

20:50 IST: Stat -- If Senegal win, they will become just the third African team to open their World Cup campaign with two wins. The first was Cameroon's famous 1990 side and the second was this great Nigeria team at France 98.

20:45 IST: Japan get their best opportunity to score in the 15th minute. The ball is cleared as far as Hasebe, who in turn, shoots but Sane makes a strong block.

20:41 IST: 11th minute -- GOAL!! Sadio Mane puts Senegal in the lead early in the game. Sarr makes a run down the right flank, passes the ball to Wague, who provides a cross to the far post. Haraguchi, present there, attempts to clear the ball with a header but misses. Sabaly gets the ball, takes a shot but the Japanese keeper punches the ball straight to Mane as the ball ricocheted off his knees and rolled into the net. Multiple attacks have done the trick for Senegal.

20:40 IST: 10 minutes are up -- Senegal are off to a strong start by repeatedly piercing the Japanese defence. They also won two corners. Japan, on the other hand, are yet to gain control of the game.

20:35 IST: Senegal get yet another corner, Niang curls the ball in and again the ball is cleared away from the box by the Japanese defence. Youssouf Sabali takes a shy at the post but the ball flies over the post. No conviction in the shot from Sabali.

20:32 IST: Senegal get the first corner of the game. Mbaye Niang takes the corner but neither of the teams get a touch on the ball.

20:30 IST: KICK-OFF! Japan, in blue, get the match underway at the Ekaterinburg Arena.

20:23 IST: Both teams have walked out to the middle and the respective national anthems are being sung.

20:00 IST: The teams have arrived at the Ekaterinburg Arena.

The teams are here!

19:45 IST: Senegal are in great spirits ahead of their Group H clash with Japan.

19:35 IST: Here is how the starting XI for Japan and Senegal look!

Team news is in for #JPNSEN!

19:30 IST: The result means that Belgium have also confirmed their spot in the round of 16, too.

The result means that #BEL have also confirmed their spot in the round of 16, too! pic.twitter.com/awcTnFJPeZ

#ENG record their biggest-ever #WorldCup victory to book their place in the knock-out stages! #ENGPAN pic.twitter.com/Kv9SU3dMKK

19:25 IST: Hello and welcome to the live blog of the Japan vs Senegal Group H match straight from Ekaterinburg Arena.

"We must keep our feet on the ground, we have to take into account that we played against 10 men for almost 90 minutes," Hasebe said, referring to Carlos Sanchez's dismissal which gave Japan the advantage against Colombia. Senegal on the other hand, too came out with an impressive all-round show against Poland, beating them 2-1. The Africans will be looking to continue the momentum from that unexpected victory into their next game.

Most of the Senegal players feature in different European clubs and with plenty of experience, they could make life tough for Japan.

After scoring his first international goal, which proved to be a decisive second for Senegal against Poland, M'Baye Niang said that the story is still not over as they have a lot more to achieve. Come Sunday, Senegal head coach Aliou Cisse would likely set a 4-4-2 formation once again and no major changes are expected in the starting XI.

Senegal 2018 FIFA World Cup Football Japan vs Senegal, Match 31 Live Blogs
Get the latest Cricket news, check out the India cricket schedule, Cricket live score . Like us on Facebook or follow us on Twitter for more sports updates. You can also download the NDTV Cricket app for Android or iOS.