Neymar has grabbed the spotlight in Russia not for his goal-scoring abilities but for his theatrics. 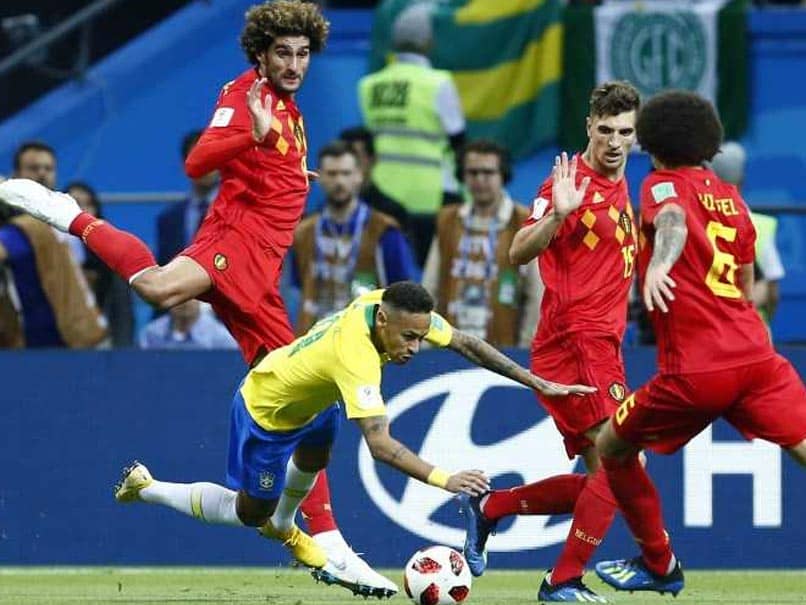 Neymar fell inside the Belgium box despite there being no contact with Marouane Fellaini.© AFP

Neymar and Brazil were dumped out of the World Cup 2018 by a clinical Belgium in the last eight stage of the tournament on Friday night. Before the match, Neymar received a lot of criticism for his play-acting during the FIFA World Cup 2018 in Russia. Fans and pundits accused the Brazilian of squirming and crying in distress at the slightest of touches. Neymar's over-the-top theatrics was panned across footballing circles. Needless to say, going into the quarter-final tie in Kazan, all eyes were on the PSG star. With Brazil trailing 0-2 and the time ticking away in the second half, the pantomime villian, in the eyes of many, just could not stop himself from using the dark arts to try and get his team back in the game.

Neymar, who was already on a yellow and in the danger of missing out on the semis if Brazil progressed, stuck out his right leg in the 54th minute in a bid to draw out a foul from Marouane Fellaini, who smartly avoided any contact.

But that still don't stop Neymar from tumbling over as if someone had pulled the rug out from under him. A majority Brazilian crowd at the Kazan Arena all went up in unison, waiting eagerly for the referee to point to the spot. Brazil coach Tite was also convinced it was a penalty and signaled animatedly for the VAR.

But there was none coming.

The replays clearly showed there was no contact and Neymar had deliberately taken a tumble but yet the Brazilian somehow escaped punishment.

Brazil did manage to pull one back without any use of Neymar's dark arts but the South Americans just didn't have enough time left to take the match into extra-time. And thus, four years after the psychodrama of Neymar's injury and a humiliating World Cup semi-final defeat as hosts, Brazil once again fell short of their goal and exited the tournament in tears.

Neymar goes home after scoring just two goals, his greatest impact on the World Cup 2018 being his tears against Costa Rica and, above all, his theatrics.

Marouane Fellaini 2018 FIFA World Cup Brazil vs Belgium, Quarter-Final 2 Football
Get the latest updates on IPL 2021, IPL Points Table , IPL Schedule 2021 , live score . Like us on Facebook or follow us on Twitter for more sports updates. You can also download the NDTV Cricket app for Android or iOS.