World Cup 2018, Brazil vs Belgium Highlights: Brazil Knocked Out After 1-2 Loss To Belgium In Quarters

FIFA World Cup 2018 Quarter Final, Brazil vs Belgium, from Kazan Arena: Brazil Knocked Out After 1-2 Loss To Belgium In Quarters 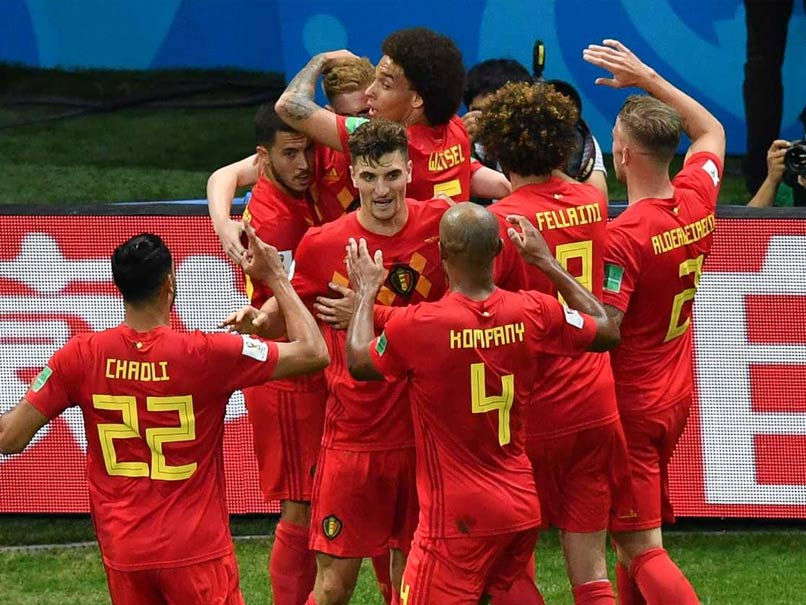 A superb first half display by Belgium ended Brazil's hopes of a record sixth World Cup crown as a Fernandinho own goal and a superb Kevin De Bruyne strike proved enough to win 2-1 and seal a semi-final spot. Although Brazil roared back in the second half with a headed goal from Renato Augusto, it is the Belgians who will face France in Saint Petersburg on Tuesday. Unbeaten in their last 15 games, Brazil's bid for a second consecutive place in the semi-finals looked in safe hands. But after an energetic start that saw Thiago Silva come close and Neymar show early promise, Brazil heads went down following Fernandinho's own goal before De Bruyne's superb strike from distance put the Red Devils in control on 31 minutes. (HIGHLIGHTS: Brazil vs Belgium)

01:24: FT: Brazil 1-2 Belgium.The record champions go out crashing of the World Cup. Brazil displayed a brilliant show on the attack but failed to overcome their World Cup drought.

01:23 IST: Belgian earn a corner,Kevin De Bruyne takes a short one, keeps the ball inside the Brazil half as referee blows the final whistle.

01:22 IST: SAVE! Courtois does well,to keep a curling shot from Neymar out.

01:17 IST: Free-kick for Belgium inside their own halfafter Hazard was brought down by Fagner and we enter the 90th minute. 5 minutes injury time to be added.

01:14 IST: Romelu Lukaku has been replaced with Tielemansfor Belgium.

01:13 IST: Yellow card for Fernandinhofor bringing Hazard down as Belgium look to keep possession off the ball. 85 minutes on the clock.

01:10 IST: Substitution for Belgium, Chadlihas been replaced by Vermaelen in the 83rd minute.

01:08 IST: SHOT GOES WIDE!Augusto gets a clear chance on goal, he was left unmarked but he sends it just away from the post at the far corner.

01:06 IST: Firmino gets a shot,off target from near the box but he has skied it. Brazil has got 21 attempts on goal so far.

01:04 IST: GOAL! Renato Augustopulls one back for Brazil from a clinical header as the ball ends in the near corner. Brazil 1-2 Belgium in the 76th minute.

01:02 IST: Costa from the right flank,takes a shot which on a rebound from Courtois falls for Neymar -- who takes a shot but cleared away by the Belgian defence.

00:57 IST: Douglas Costa tries his luck from outside the boxbut hits the defender on the way as Brazil retain possession. 70 minutes played.

00:52 IST: Belgium back on the possession, but a foul on Neymar puts Brazil back on the counter as Coutinho's heavy touch goes for a Belgium throw in.

00:49 IST: Chadli breaks on the counter for Belgium,finds de Bruyne in space at the midfield who finds Hazard  on the left flank, whose cross is a bit too much for the target man. 63 minutes on the  clock.

00:44 IST: Penalty ruled out by VAR for Brazil!Gabriel Jesus nutmeg Vertonghen and takes a little flick of Kompany as Brazil appeal for a spot kick!

00:39 IST: Neymar finds Marcelo ahead on the left flank,as the Real Madrid defender's cross has been cleared away by the Belgian defence as Brazil retain possession.

00:37 IST: Firmino has replaced Willian in the second half.

00:34 IST: Free-kick for Belgium,from the left flank, Kevin de Bruyne takes a short one but fail to maintain possession on the ball as Brazil initiate their first attack of the second half.

00:15 IST: Brilliant defensive play for Belgium,not giving Brazil any space to make the most of their attacks and ease past their defenders inside the box. One minute added for half-time.

00:12 IST: SAVE! Alissonjumps to push the ball over the cross-bar, which came off a de Bruyne shot which was dipping in as Belgium get a corner but Kompany back-heel has been well collected by Alisson. 42 minutes played.

00:09 IST: Belgium in the mood here,Hazard eases past the Brazil midfielder as Lukaku gets a back-heel before Belgium play the ball back to Courtois and look to maintain possession on the ball, complete domination!

00:06 IST: Brazil still looking to maintain possession on the ball,as Gabriel Jesus in space gets a header on the ball but his poor attempt goes off target. 35 minutes played.

00:02 IST: GOAL! Kevin de Bruyne scores from outside the box through a screamerin the 31st minute to put Belgium further in the front. Brazil 0-2 Belgium.

00:00 IST: Corner for Brazil,Willian delivers. Neymar gets the last shot, which takes a deflection for another CORNER!

23:56 IST: Belgium maintain a high back-line,as Brazil force a flurry of attacks on either ends. Marcelo gets a brilliant shot from outside the box in the 25th minute but Courtois keeps it away.

23:50 IST: Coutinho runs into space,dances past the defenders and takes a shot which keeps low from outside the box, only to see it go into the safe arms of Courtois.

23:47 IST: Brazil looking to organise themselves better,but lose possession through de Bruyne as Belgium initiate another counter-attack, but fail to make the most of it.

23:44 IST: GOAL! Belgium take lead throughan own goal off Fernandinho's elbow inside the box in the 13th minute, which initially came off an Vincent Kompany header.

23:43 IST: Kevin de Bruynefinds Fellaini through a lovely through ball as the Manchester United midfielder deflects it for a CORNER!

23:41 IST: Corner for Brazil,Willian delivers falls in space for Paulinho -- who makes a mockery of the shot, no power at all in that shot.

23:39 IST: Belgium break on the counter,Chadli gets the last shot on goal but goes off target. End-to-end play with Brazil making the most of the ball in the first 10 minutes.

23:37 IST: Brazil trying to contain the ball as Marcelo wins a CORNER!Neymar delivers as Thiago Silva hits the POST!

23:34 IST: Neymar delivers a fine cross,trying to find Gabriel Jesus but the ball is too close for Courtois.

23:33 IST: Kevin de Bruynehas an early shot, off target for Belgium. Clear intent from Belgium, they are going to throw the kitchen sink at this one.

23:25 IST: National anthemstake the centre stage as both team gear up for the all-important quarter-final.

22:20 IST: Nacer Chadli and Marouane Fellainiboth start for Belgium while suspended Caseimiro has been replaced by Fernandinho.

Ready for another big game?

21:53 IST: Brazil board the busfor Kazan Arena, as fans stand by with high hopes of seeing their side enter the semi-finals.

21:50 IST:In the first quarter-final France went through to the semi-final as Antoine Greizmann was adjudged the man of the match.

21:30 IST: Hello and welcome to the live commentary from the quarter-finals tie between Brazil and Belgium.

But despite sailing through the group stage, Martinez's ambitious unit have their work cut out if they are to go all the way to the July 15 final in Moscow.

Third-ranked Belgium reached the quarter-finals in 2014 in Brazil but before that the last time they got so far was in 1986, when 'Little Prince' Frank Vercauteren steered them to the semi-finals before a Diego Maradona double-ended their hopes in a 2-0 defeat in Mexico.

Vercauteren said before the tournament that Russia represented "perhaps one of the last chances for this generation of players to live up to expectations, because in 2022 a lot of them won't be there".

On Monday, Belgium mounted a stirring fightback to beat Japan, with Nacer Chadli scoring the winner in the 94th minute.

Belgium Neymar Eden Hazard Kevin De Bruyne Philippe Coutinho Fernandinho 2018 FIFA World Cup Football Live Score Live Blogs Brazil vs Belgium, Quarter-Final 2 Football
Get the latest updates on IPL Auction 2023 and check out  IPL 2023 and Live Cricket Score. Like us on Facebook or follow us on Twitter for more sports updates. You can also download the NDTV Cricket app for Android or iOS.