France swung between good and indifferent on their way to the FIFA World Cup 2018 final. 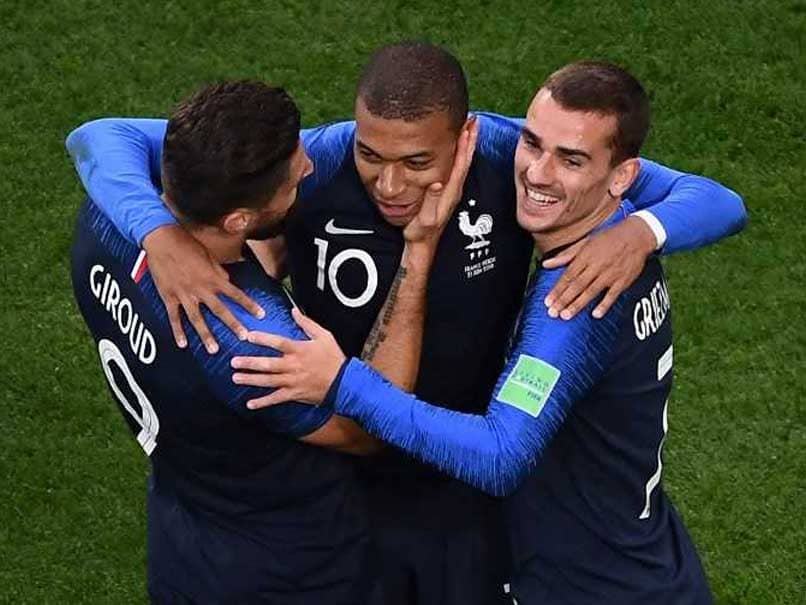 Kylian Mbappe and Antoine Griezmann have been the stars for France in World Cup 2018.© AFP

France, armed with a mix of prodigies and experienced campaigners, will face perennial underdogs Croatia in the FIFA World Cup 2018 final at the Luzhniki Stadium in Moscow on July 15. In an unpredictable tournament, France have been the lone favourites to prove their mettle as they booked a summit spot with a 1-0 win over Belgium through Samuel Umtiti's header at St. Petersburg on Tuesday, consigning Belgium's 'golden generation' to another bitter disappointment. France were placed in Group C with Denmark, Peru and Australia, who finished in that order in the group stage respectively.

France beat Australia 2-1 in their opening World Cup 2018 match on after the Video Assistant Referee (VAR) system was used for the first time in the competition's history. Antoine Griezmann had a penalty awarded thanks to VAR and scored before Mile Jedinak equalised for Australia from the spot.

Paul Pogba's 81st minute shot bounced in over the line off the crossbar to give France a narrow win in the Group C clash at the Kazan Arena.

With the goal, Mbappe became the first teenager in history to score for France at either the World Cup or European Championships. Successive wins over Australia and Peru helped France reach the last 16.

France secured first place ahead of Denmark in Group C following a 0-0 draw in Moscow that could set up a heavyweight World Cup clash with Lionel Messi's Argentina in the last 16.

Didier Deschamps' side dominated possession but struggled to create any clear-cut chances against a determined Denmark.

France pipped Argentina 4-3 to enter the quarter-finals of the 2018 FIFA World Cup on Saturday.

Kylian Mbappe scored a brace in France's victory over Lionel Messi-led Argentina. The youngster scored in 64th minute and then found the net in 68th minute to put France on top.

France outclassed Uruguay 2-0 to enter the semi-finals of the FIFA World Cup 2018 at the Nizhny Novgorod Stadium.

Samuel Umtiti headed France into the World Cup final in Saint Petersburg with a 1-0 win.

In a World Cup replete with set-piece goals, a corner again proved decisive when Umtiti timed his run perfectly to meet Antoine Griezmann's delivery six minutes into the second half.

Antoine Griezmann France vs Croatia, Final 2018 FIFA World Cup Football
Get the latest updates on India vs Australia Series, check out the India vs Australia Schedule for 2020-21 and Ind vs Aus live score . Like us on Facebook or follow us on Twitter for more sports updates. You can also download the NDTV Cricket app for Android or iOS.