In a match that saw Didier Deschamps' men frustrated throughout by a gutsy Australian defensive display, French pride was only restored in the 81st minute. 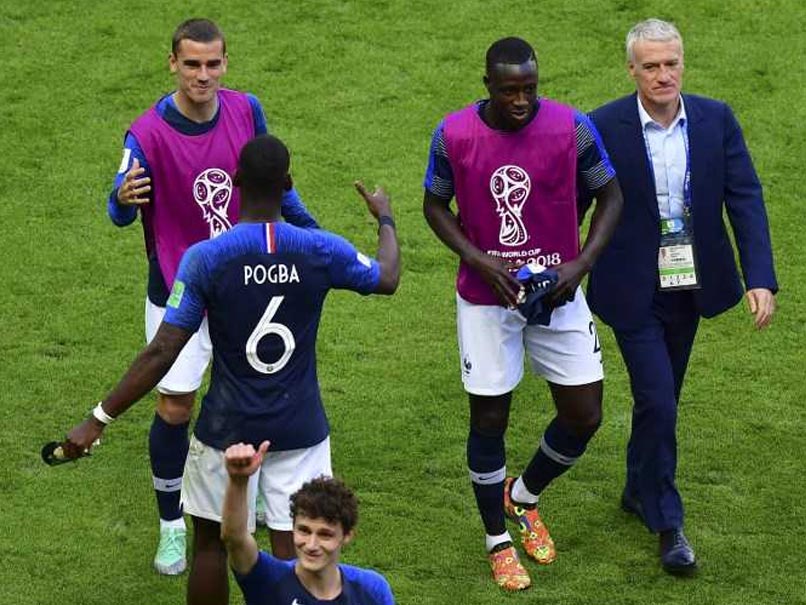 World Cup 2018: Antoine Griezmann and Paul Pogba got on the scoresheet for France vs Australia.© AFP

Antoine Griezmann scored from the first VAR-assisted penalty awarded in the history of the World Cup as title hopefuls France battled to a 2-1 win over gutsy Australia in Kazan on Saturday. Griezmann, expected to make a huge impact in World Cup 2018 after topping the Euro 2016 scorers with six goals, was left frustrated by a solid Socceroos defensive display in a tight first half. The Atletico Madrid star wrote his name into the history books after he went down under a tackle from Josh Rishdon in the penalty box in the second half of the Group C fixture.

Referee Andres Cunha from Uruguay did not initially award a spot-kick but after viewing the VAR footage, ruled it was a penalty and Griezmann coolly slotted past Socceroos' goalkeeper Mathew Ryan at the Kazan Arena.

In a match that saw Didier Deschamps' men frustrated throughout by a gutsy Australian defensive display, French pride was only restored in the 81st minute.

Chelsea striker Olivier Giroud, still wearing a bandage around a recent head injury, had replaced Griezmann only minutes before playing a one-two with Paul Pogba on the edge of the area.

The Manchester United midfielder's shot took a deflection off the boot of defender Aziz Behich before creeping over the outstretched hands of Ryan and bouncing over the goalline.

Deschamps, a World Cup winner with France in 1998, will be thanking his lucky stars after a performance which will give him more questions than answers about his ambitious side -- the second-youngest in the tournament after Nigeria.

France are hoping to join tournament favourites Brazil, Germany and Spain in the latter stages as they look to make amends for losing the Euro 2016 final to Portugal.

In a tight first half that saw Griezmann, teenager Kylian Mbappe and Ousmane Dembele fail to spark, it was the yellow-clad Aussie fans who have invaded the Tatar capital in recent days who had most to cheer about.

On 17 minutes France 'keeper Hugo Lloris was forced to turn a dangerous deflection from Corentin Tolisso around his far post.

It was a huge sight of relief for Les Bleus, who went from making a bright start to finishing the opening half wondering how to pierce the Australia back line.

Before Griezmann's feat, Mbappe had made history at kick-off by becoming the youngest French player, at 19 and six months, to start a World Cup game.

Only two minutes in, the fleet-footed Paris Saint-Germain forward cut in to meet an enticing through ball from midfield and force Ryan into action at his near post.

Mbappe won a free kick 25 yards out after a challenge from behind but Paul Pogba's curling effort over the wall was straight to Ryan.

Deschamps had warned of the improvement Australia have made under Dutch coach Bert van Marwijk, who took over from Ange Postecoglou in January.

But Australia spent most of the first half defending and ultimately frustrating France, rarely creating real chances of their own.

The real drama, however, unfolded after the interval with the VAR decision.

Antoine Griezmann Mile Jedinak Kazan Arena 2018 FIFA World Cup France vs Australia, Match 5 Football
Get the latest updates on ICC T20 Worldcup 2022 and CWG 2022 check out the Schedule, Live Score and Medals Tally. Like us on Facebook or follow us on Twitter for more sports updates. You can also download the NDTV Cricket app for Android or iOS.