FIFA World Cup 2018, Highlights, France vs Australia: France tasted victory in their tournament opener against Australia on Saturday. Antoine Griezmann and Paul Pogba struck for France while Jedinak was the lone scorer for Australia. 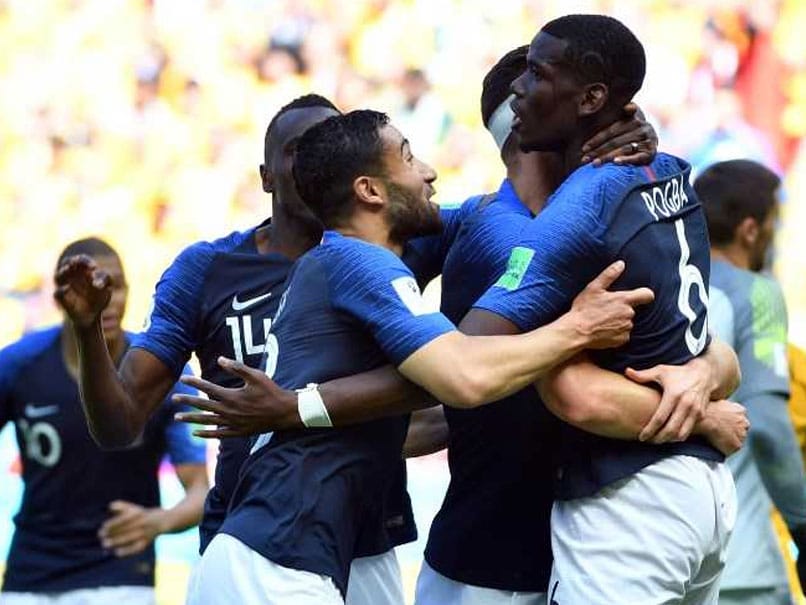 France beat Australia 2-1 in their opening World Cup 2018 match on Saturday after the Video Assistant Referee system was used for the first time in the competition's history. Antoine Griezmann had a penalty awarded thanks to VAR and scored before Mile Jedinak equalised for Australia from the spot. Paul Pogba's 81st minute shot bounced over the line off the crossbar to give France a narrow win in the Group C clash at the Kazan Arena. France had dominated the first half of their opening World Cup encounter against Australia but have failed to make a breakthrough against their stubborn opponents. Antoine Griezmann and Kylian Mbappe have posed quite a few problems for the Australians but have been wasteful in the final third. Australia despite defending for large parts of the game had the best chance from a free-kick but were denied by a smart save from Hugo Lloris. France coach Didier Deschamps left Chelsea striker Olivier Giroud on the bench as teenager Mbappe led Les Bleus' front line in Kazan. Mbappe, one of 14 players in France's squad who have yet to feature in a major tournament, has been in great form for Paris Saint-Germain last season and started Saturday's Group C opener flanked by Atletico Madrid's Antoine Griezmann and Ousmane Dembele of Barcelona. (Highlights: France vs Australia)

17:30 IST: Thank You for joining us for the first match of the day between France and Australia. For the live blog of the second match between Argentina and Iceland click here

17:19 IST: 90+3 minutes:Australians desperately trying to score. Aussie attackers are in the French box again and it another MISS.

17:12 IST: 86th minute: Yellow card for Beich. Its a free kick just outside the box for France and they miss again. Straight to the goalkeeper.

17:12 IST: 85th minute. Australians are really trying hard at the center but French defenders are at top of their game.

17:07 IST: 81st minute. GOAL!Pogba scores his 10th international goal. Ball deflects off an Australian defender, hits the underside of the crossbar and goes in with goal-line technology called into action. The French are in the lead again.FRA 2-1 AUS

16:47 IST: Jedinak steps up and coolly slots away the penalty to draw Australia level. Game on in Kazan!

16:46 IST: 60th minute! Big mistake from Samuel Umtiti! The Barcelona defender jumps with his right hand in the air and the ball strikes his hand. Referee points to the spot!

16:45 IST: 58th minute. Another opportunity for France and they miss. The game has come to life now. Aussies are under the pressure now.FRA 1-0 AUS

16:39 IST: 54th minute. Penalty call from France denied. It was a brilliant ball from Pogba. Review taken by France and its a PENALTY!

16:34 IST: 2 minutes into the second half. French have started off the second half aggressively. Griezmann and Mbappe are putting the Aussie defense under pressure here.

16:32 IST: Second half begins! No substitution for both the teams in the break.

One minute of added time

16:15 IST: Behich strikes and misses! Another opportunity for the Socceroos and it goes in vain.

16:13 IST: 43rd minute and its another miss from the French. Flurry of chances have been created but Aussie defense has kept the French at bay.

16:09 IST: 40 minutes are up! 5 to go for half time. Australia seem to be attacking more aggressively now. Both teams are still goalless.

16:05 IST: 35 minutes are up. Still no goal for both the teams. French have created a number of opportunities but have failed to convert. Socceroos have defended brilliantly till now.

16:00 IST: It was a great chance for Griezmann in the 30th minute but his touch in the box evades the net.

15:58 IST: Free kick for Australia outside the box but goes straight into the hands of the goalkeeper.

15:54 IST: Decent ball by Pogba but once again Socceroos' defense block the French.

15:50 IST: 20 minutes are up. Majority possession has been with the French but the Australians have been good with their defense.

15:47 IST: Pavard with a foul. Second free kick for Australia and Sainsbury misses!What an opportunity that was! How costly is it going to be for the men in yellow.

15: 43 IST: Yellow card for Leckie for a poor tackle on Hernandez

15:41 IST: First free kick for the Socceroos in the match and the ball goes over.

15:37 IST: Another free kick for France from just outside the box. Ball goes straight in keeper's hands.

15:35 IST: 5' : Another shot on target for France. They are putting the Australians under pressure.

15:33 IS: 3' : Free kick for France and Pogba's strike goes straight into the hands of goalkeeper.

15:31 IST: 2': Electrifying atmosphere at the Kazan arena. France on the attack! Good save by the Australian goal-keeper. Corner has been cleared.

15:24 IST: The moment is finally here! Both teams are the center, lining up on either sides of the officials for the national anthems.

15:10 IST: Australian fans seem to be in high spirits at the Kazan Arena.

15:07 IST: French team is at the center and warming-up for their maiden clash at the World Cup.

15:03 IST: French fans are all pumped up and excited for the upcoming clash.

15:00 IST: Formation for both the teams is as follows

14:55 IST: A peep into the dressing rooms of both Australia and France.

The @Socceroos are here!

Are you ready for today's football?

14:46 IST: First match on Day 3 of the FIFA World Cup. This will also be the first encounter of Group C

14:45 IST: Hello and welcome to the live match updates of the Group C encounter between Franceand Australia.

Fluffing their lines against Group C minnows Australia at the Kazan Arena would be unthinkable for most French fans, although the Socceroos -- who have talked up how they will fight tooth and nail to get a result -- have pledged to provide the first hurdle. Bold predictions aside, on paper France should breeze through a Group C which also features Peru and Denmark. Antoine Griezmann, who announced Thursday he was resisting advances from Barcelona and staying at Atletico Madrid, is one of the hottest properties in world football and, as he did at Euro 2016, is expected to shine in Russia. Two years after a disappointing Euro 2016, Manchester United midfielder Paul Pogba could finally shine on the big stage, along with 19-year-old Paris Saint-Germain striker Mbappe, who will be making his World Cup debut. In comparison, Australia coach Bert van Marwijk has yet to decide who will lead the Socceroos' attack, with former A-League reject Andrew Nabbout appearing to be leading the race ahead of Tomi Juric, who plays for Swiss side Lucerne. The Aussies' defensive game, a top priority for Van Marwijk since he was parachuted in to replace Ange Postecoglou in January, is still a work in progress. Australia have few big name stars, but Nabbout insists the gulf in class is not an issue.

Paul Pogba Kylian Mbappe Tim Cahill 2018 FIFA World Cup Football France vs Australia, Match 5 Football Live Score Live Blogs
Get the latest updates on India vs South Africa and check out  Schedule, Results and Live Score. Like us on Facebook or follow us on Twitter for more sports updates. You can also download the NDTV Cricket app for Android or iOS.