France booked their semi-final clash against Belgium after eliminating Uruguay. 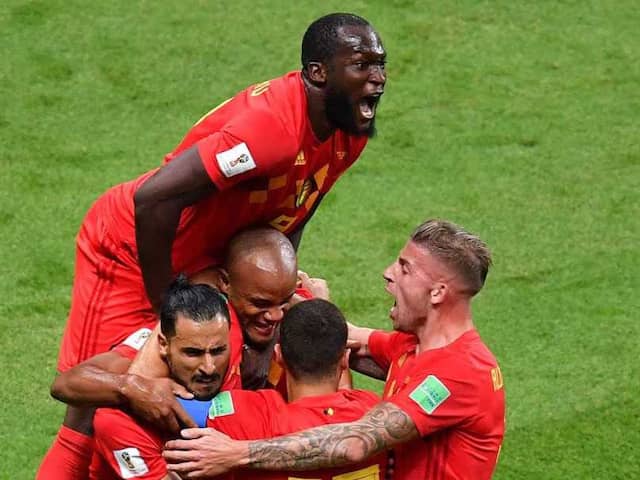 France meet neighbours Belgium in the semi-finals of the World Cup on Tuesday.© AFP

France meet neighbours Belgium in the semi-finals of the World Cup on Tuesday as they attempt to reach a third final in 20 years. Belgium, after eliminating title favourites Brazil, are hoping to reach the final for the first time and fulfil the potential of their much-lauded "golden generation". Belgium have scored 14 goals in five matches so far in the mega event and are in the last four for just the second time in their history, after claiming their biggest-ever World Cup scalp by beating Brazil 2-1 in the quarter-finals. On the other hand, France booked their semi-final clash against Belgium after eliminating Uruguay with a 2-0 triumph.

French teenage sensation Kylian Mbappe announced himself on the global stage with a brilliant two-goal display in a last-16 defeat of Lionel Messi's Argentina. He is his country's joint-leading scorer in Russia with three goals, alongside Antoine Griezmann, although the 19-year-old was given far fewer opportunities against a solid Uruguay defence in the quarter-final.

His lightning speed down the right and game-changing ability will put an experienced Belgium defence to the test as coach Roberto Martinez ponders a slight reshuffle. Jan Vertonghen will be one of those primarily responsible for nullifying Mbappe, although the Tottenham defender could push forward into a wing-back role with Thomas Vermaelen slotting into the left of a back three due to the suspension of Thomas Meunier.

Vertonghen is the only Belgian player with 100 international caps, and the 31-year-old's looping header sparked a dramatic fightback in the 3-2 victory over Japan in the last 16.

After disappointing campaigns at the 2014 World Cup and Euro 2016, Romelu Lukaku has defied his critics to spearhead Belgium's title challenge. The Manchester United striker has scored four goals in four matches, but it was his barnstorming run at the Brazil defence to set up Kevin De Bruyne's goal that will be remembered from their 2-1 quarter-final victory.

Samuel Umtiti has been a mainstay in the France backline ever since he was parachuted in during the team's run to the Euro 2016 final. However, the Barcelona centre-back's fitness is an ongoing concern for Didier Deschamps.

The 24-year-old missed the final few games of the season with a knee problem and was spotted grimacing towards the end of the 2-0 victory over Uruguay. Umtiti has worn a brace on his right knee since the start of the competition, and it will need to hold up if he is to cope with a Belgium attack that is lethal on the counter.

There may be few similarities in style between the two Manchester United midfielders, but the pair will see plenty of each as Marouane Fellaini prepares to frustrate the creative talents of Paul Pogba.

Often unfairly ridiculed for his ungainly approach, Fellaini's impact cannot be understated in Belgium's run to the last four. He started just once in the group stage, but came off the bench to net the equaliser as Belgium recovered from two goals down to overcome Japan to reach the quarter-finals.

Fellaini saved his best for Brazil, shutting down the likes of Neymar and Philippe Coutinho repeatedly and adding grit to an explosive attacking outfit. On the other side, N'Golo Kante's omnipresence has allowed Pogba more freedom to roam and the latter was excellent in the win over Argentina. He was solid, if not spectacular, against Uruguay, and France will bank on another influential display with the final firmly in their sights.

Romelu Lukaku Eden Hazard Football
Get the latest updates on IPL 2020, check out the IPL Schedule for 2020 and Indian Premier League (IPL) Cricket live score . Like us on Facebook or follow us on Twitter for more sports updates. You can also download the NDTV Cricket app for Android or iOS.