Luis Enrique, 48, will replace Julen Lopetegui, who was fired when the coach announced he had signed to take over at Real Madrid. 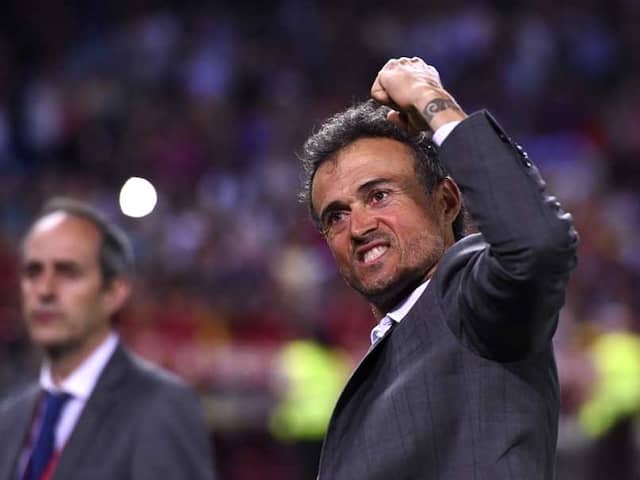 Luis Enrique was Barcelona coach for three years from May 2014.© AFP

Enrique, 48, will replace Lopetegui, who was fired by Rubiales when the coach announced he had signed to take over at Real Madrid.

The 48-year-old will have the tough task of reviving a national team deflated after three consecutive failures at major tournaments, the latest their World Cup loss to hosts Russia -- ranked 70th in the world -- on penalties in the last 16.

Enrique will be taking over from Lopetegui, who was fired by Rubiales when the coach announced he had signed to take over at Real Madrid.

The national team's then sporting director Fernando Hierro stepped in hastily to replace him and led Spain to the last 16, before stepping down after the tournament.

Changing the coach two days before Spain's opening game did not likely benefit the side's chances.

With Hierro in place, however, there were positive signs against Portugal, when Cristiano Ronaldo's free-kick overshadowed an assured Spain performance in a thrilling 3-3 draw.

But defensive errors and tactical rigidity soon came to the fore as poor displays followed against Iran, Morocco and Russia.

Enrique will also be taking over a team without key captain Andres Iniesta, who has retired from international football.

He faces the same two-pronged brief that Lopetegui was tasked with two years ago: to restore confidence and get fresh blood from the younger generation.

Of the starting XI against Russia, only Marco Asensio will be younger than 30 by the time the next World Cup comes around. Gerard Pique, Sergio Ramos, David Silva, Diego Costa and Sergio Busquets will all be 33 or older.

It means those left from the triple triumph of Euro 2008, the 2010 World Cup and Euro 2012 will either be gone or down to the last few and that could pave the way for an evolution of style.

Enrique was Barcelona coach for three years from May 2014, leading the Catalan giants to the treble of La Liga, Copa del Rey and Champions League titles in his first campaign at the helm.

He will be aided by Jose Francisco Molina, 47, a former goalkeeper at Atletico Madrid and Deportivo La Coruna who played nine times for Spain and was named as sporting director.

Spain Luis Enrique 2018 FIFA World Cup Football
Get the latest Cricket news, check out the India cricket schedule, Cricket live score . Like us on Facebook or follow us on Twitter for more sports updates. You can also download the NDTV Cricket app for Android or iOS.