The host country's PM was clearly not amused and chose to look the other way as Croatia's first female President enjoyed every moment of her team dumping Russia out of the tournament. 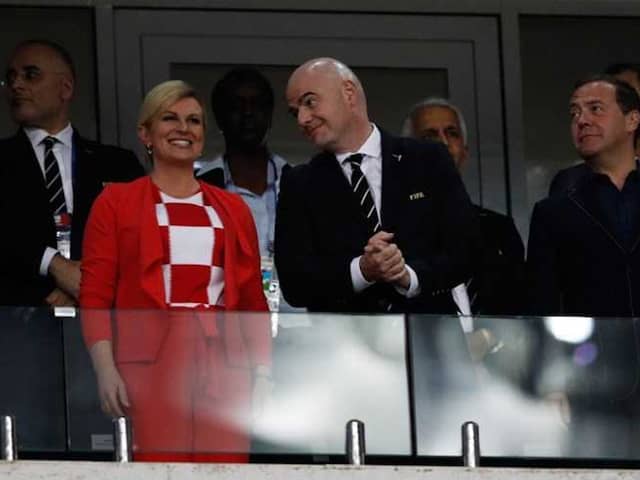 Croatia advanced to their first World Cup semi-final since 1998.© Twitter

Ivan Rakitic scored the winning penalty as Croatia beat Russia 4-3 in a shoot-out after a dramatic 2-2 draw in extra-time on Saturday to end the World Cup hopes of the host nation and advance to the semi-final where they face England. Croatia's President Kolinda Grabar-Kitarovic was present in the Russian Black Sea city of Sochi to support her country's football team as they made it to the World Cup semi-finals for only the second time since becoming an independent nation. Seated beside FIFA President Gianni Infantino and Russian Prime Minister Dmitry Medvedev in the VIP section, she was seen raising her hands and doing a little victory dance to celebrate Croatia's second goal in front of a packed Fisht Stadium. The host country's PM was clearly not amused and chose to look the other way as Croatia's first female president enjoyed every moment of her team dumping Russia out of the tournament.

The Russians, riding a wave of euphoria after unexpectedly knocking out Spain in the previous round, were determined to carry on to a first World Cup semi-final since the break-up of the Soviet Union.

Brazilian-born Mario Fernandes had kept Russia's dream alive when he headed home in the 115th minute to level the scores and force penalties, but he and Fedor Smolov both failed to convert their spot-kicks in Sochi.

Croatia, for whom Andrej Kramaric and Domagoj Vida had earlier found the net, advanced to their first World Cup semi-final since 1998.

They will face England, who beat Sweden 2-0 earlier, at the Luzhniki Stadium Moscow on Wednesday. In contrast for Russia, who had taken the lead through another Denis Cheryshev wonder goal in the first half, there is only heartbreak as they finally go out.

Croatia Fisht Stadium 2018 FIFA World Cup Football Russia vs Croatia, Quarter-Final 4
Get the latest Cricket news, check out the India cricket schedule, Cricket live score . Like us on Facebook or follow us on Twitter for more sports updates. You can also download the NDTV Cricket app for Android or iOS.