FIFA World Cup 2018: Egypt vs Uruguay Highlights: Uruguay's deserved last-gasp victory leaves them and Russia in early control in Group A after the hosts' 5-0 mauling of Saudi Arabia in the tournament opener. 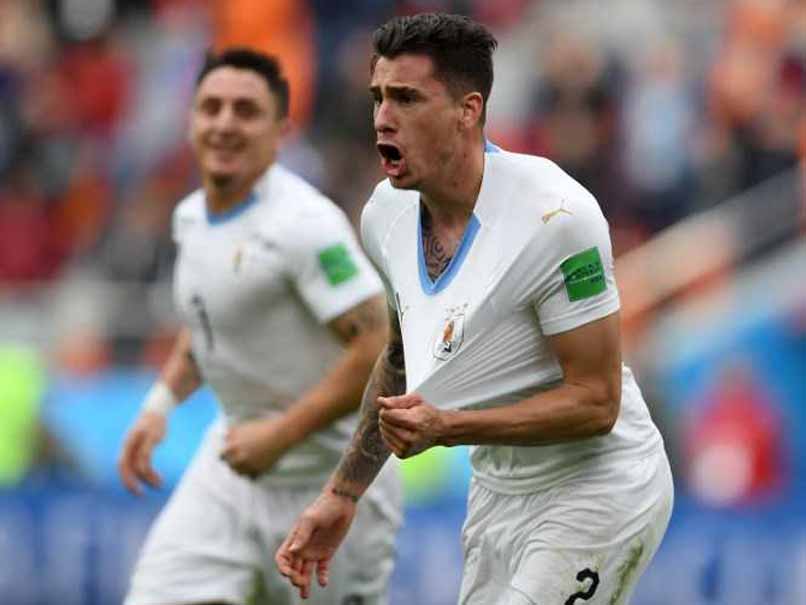 Jose Gimenez was the unlikely 89th-minute match winner as Uruguay defeated an Egypt side shorn of star man Mohamed Salah 1-0 in their FIFA World Cup 2018 opener on Friday. Uruguay's deserved last-gasp victory leaves them and Russia in early control in Group A after the hosts' 5-0 mauling of Saudi Arabia in the tournament opener on Thursday. A poor game looked likely to end in stalemate but with Uruguay cranking up the pressure late on, defender Gimenez rose to power a header into the top corner and break Egypt hearts. Paris Saint-Germain striker Edinson Cavani had a couple of half-chances for Uruguay in the first half, the best made by himself when he juggled the ball and lashed it on the volley from outside the box, but it was deflected over. Attacking partner Luis Suarez -- in his first World Cup appearance since his biting ban of 2014 -- was largely quiet in an unremarkable first period, doing his best work when he drifted between the lines of Egypt's defence and midfield. Marwan Mohsen played as a lone forward for Egypt, but with Salah missing and Uruguay skipper Diego Godin imperious, he hardly had a sniff. (Highlights: EGYPT vs URUGUAY)

19:37 IST: Thank you for joining our coverage of the Egypt and Uruguay match. Do join our live blog for the second match of the day between Iran and Morocco.

19:19 IST: GOAAALLL!! Uruguay finally break the deadlock and deservedly so as Jose Gimenez scores with a brilliant header

19:18 IST: So close for Uruguay! Edinson Cavani hits the post from a free-kick with just three minutes of normal time remaining.

19:15 IST: Free-kick for Uruguay and it's just outside the box. What can they make of this?

19:12 IST:A stinging first-time volley from Edinson Cavani but Elshenawy, in Egypt goal, makes the best save of the tournament so far

19:04 IST: Another golden chance for Luis Suarez and he again fails to take advantage of it. Egyptian goalie Elshenawy has been brilliant today!

19:01 IST: Shot on goal for Egypt!A powerful drive from Egyptian captain Fathi from outside the box but is smartly saved by Muslera.

18:59 IST:Cavani gets a shot off from inside the D but makes a hash of things. Egypt still defending valiantly.

16:51 IST:Egypt are making a substitution but it's not Salah coming on.

16:46 IST:Suarez is seeing a lot of the ball in the final third but is finding it difficult to get the better of the Egyptian backline.

16:42 IST:Egypt are looking stronger in attack the second half but yet to get a clear-cut chance.

16:37 IST:It was a brilliant through ball from Cavani and Suarez managed to evade the Egyptian defenders and get his shot off but Elshenawy was at hand to deny the Barcelona striker.

18:36 IST: Big chance for Suarez! His shot from inside the six-yard box is brilliantly saved by Egyptian goalkeeper M Elshenawy.

18:35 IST:The two teams are out for the second half after a goalless first 45

18:17 IST: Halftime! Its 0-0 at the break. Suarez came the closest to scoring. Egypt maintained their discipline throughout while Uruguay couldn't break the resolute Egyptian backline |
Egypt 0 - 0 Uruguay

18:16 IST:Uruguay are trying to get their shape back as we approach the half time. One minute of added time.

18:14 IST:Uruguay are lacking a rhythm while Egypt are defending well. Uruguay midfielders need to stitch some passes to help their striking duo of Suarez and Cavani. We are edging closer to the half time whistle. 43 minutes gone.

18:10 IST:Whistles go out across the stadium as Uruguay refuse to put the ball out despite an Egypt player lying injured on the ground.

18:07 IST:Uruguay are hogging the possession but have not really posed a big danger to the Egypt goal.

18:01 IST:Half an hour into the game and Uruguay have looked the more threatening of the two.

17:47 IST:Elneny floats the free-kick into the box but there are enough Uruguayan defenders to clear the danger.

17:46 IST: Free-kick for Egypt in a dangerous position!

17:44 IST:Luis Suarez gets his first real taste of the action but his shot from inside the box is off the mark.

17:42 IST:Egypt finally string a few passes together which leads to a shot from Mahmoud Hassan but the shot poses no problem for Muslera in Uruguay goal.

17:39 IST:Edinson Cavani has the first shot of the match but his strike lacked the power to beat the Egyptian goalie

17:36 IST:The South Americans have the early possession. Whenever Egypt get the ball, they are being hounded off it.

17:28 IST:The two teams are out and we are minutes away from the kickoff

17:12 IST:Here's how the teams will line-up for this crucial Group A fixture.

Here are how the teams are looking in Ekaterinburg...#WorldCup pic.twitter.com/G8AJ4Q5gVC

17:00 IST:Both teams will be feeling the pinch courtesy Russia's dazzling start to their World Cup campaign, The hosts thrashed Saudi Arabia 5-0 in the tournament opener and will now have a massive advantage in terms of goal difference in Group A.

16:55 IST:Egyptian fans are in high spirits ahead of their team's tournament opener. They will be hoping Egypt can make a winning start after returning to the tournament after a gap of 28 years.

16:40 IST:Luis Suarez and Edinson Cavani looked quite relaxed as the Uruguayans arrived at the Ekaterinburg Arena.

Just under 45 minutes to go!

16:25 IST:Salah didn't look too happy as he made his way out of the team bus.

The @Pharaohs have arrived at the stadium!

Are you ready for a day of football? Find out where you can watch #EGYURU here https://t.co/OcvgcPOyfE#WorldCup

16:20 IST:Salah's absence is a blow to Egypt's hopes of making a strong start to their World Cup assault in Russia, against a talented Uruguay side boasting former Liverpool forward Luis Suarez and PSG striker Edinson Cavani.

16:01 IST: Big news coming in! Mohamed Salah has not been included in Egypt's starting line-up. He starts on the bench.

We have our teams for the first match of the day!

16:00 IST: Hello and welcome to the live blog of first match of Day 2 between Egypt and Uruguay.

In their previous appearances in 1934 and 1990, Egypt could not manage to go beyond the group stage but this time they will be hoping for a better show.;

Uruguay, the two-time World Cup winners, finished fourth in 2010 and reached the round of 16 in 2014. While they have had mixed qualifying campaigns, they always put up their best show on big occasions.

Luis Suarez Egypt vs Uruguay, Match 2 2018 FIFA World Cup Football Live Score Live Blogs Football
Get the latest updates on Fifa Worldcup 2022 and check out  Fifa World Cup Schedule, Stats and Live Cricket Score. Like us on Facebook or follow us on Twitter for more sports updates. You can also download the NDTV Cricket app for Android or iOS.