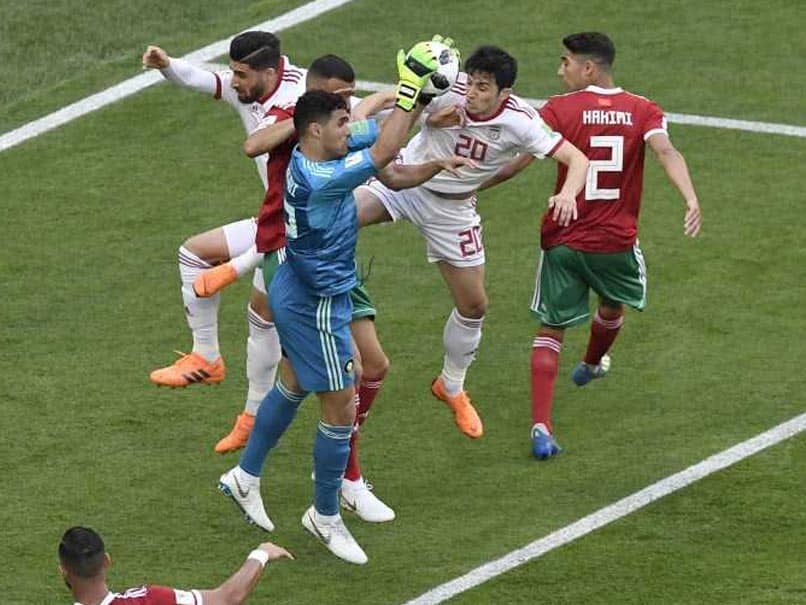 Iran beat Morocco 1-0 to register their first World Cup match victory since 1998. The winning goal came deep into stoppage time and was a gift by Morocco. Morocco substitute Aziz Bouhaddouz put in an unstoppable header in the near post in his attempt to clear the ball. Iran got a prized gift in form of the winning goal after their opponents had settled for a draw. Both teams will be contemplating how they got into the position they were. Morocco will be wondering how they were at the receiving end of the result while Iran will deem themselves lucky after they were second best in majority of the match.

They met each other only once previously, a tie which ended in a draw. The last time Morocco appeared in a World Cup was two decades ago in 1998, hosted by France. They entered the tournament under the tutelage of Herve Renard and will aim for a turnaround in their sixth appearance. This is the fifth time that Iran will play at a World Cup. Their first World Cup was in 1978 where they faced a first round exit. Their last three appearances were in 1998, 2006 and 2014 editions.

22:20 IST: 90' The match has been a game of two halves. First half saw a flurry of chances missed by both the teams while the second half was witness to really less chances.

22:17 IST: 86' This match seems to be heading towards a draw unless someone from either team pops up with a winner just like the Uruguay-Egypt match.

22:10 IST: 79' Another good save by Iranian goalkeeper Ali Bairanvand. Number 7 Hakim Ziyach hits a powerful volley. Both goalkeepers having a good outing in the middle.

22:10 IST: 78' Iran's Omid Ebrahimi is clutching his ribs. Replays show bruises on his back. He is clearly struggling and is rightly substituted | Morocco 0-0 Iran after 79 minutes

22:04 IST: 72' Iran's Jahanbakhsh gets down the inside left but his attempted cross is blocked and his team gets a corner. Again, the delivery is poor and another decent attacking opportunity goes in vain.

21:53 IST: 64' Little in the way of chances being created in this second half. The first half was a lot more entertaining, but the players seem to be getting more tense the longer it goes on. Nothing separates these two teams. No shots on target in the second half | Morocco 0-0 Iran

21:50 IST: 60' After a hour's play, there is no goal so far. The second half has seen both these teams scramble for chances. There was no clear cut chance for Morocco and Iran. Both teams looking for an incisive thrust.

21:45 IST: 56' Decent play from Iran, who are currently enjoying a rare period of possession. They lose the ball, however, and it's Morocco's turn to attack on the break. Their attack breaks down when Hakim Ziyech is harshly penalised for a handball he couldn't possibly avoid.

21:40 IST: 50' Iran are fantastic on the break. Only if their finishing was good enough, they could have broken the deadlock.

21:36 IST: 47' Yellow for Iran's Alireza Jahanbaksh. Not required at all. The second half has begun on a fiery note.

21:20 IST: Its 0-0 at halftime. After an early onslaught by Morocco, Iran got back into the game. Morocco need to rebuild and restrategise as Iran now hold the edge going into the half time. Two big moments for both team in the first half | Morocco 0-0 Iran

21:14: 42' El Kajoui makes a fantastic save for Morocco. Number 20 Sardar Azmoun misses a sitter. One on one situation and Iran fail to convert.

21:14 IST: As we approach half time, Morocco had a good star but Iran got a foothold in the preceedings now.

21:10 IST: 38' Sardar Azmoun goes down for Iran. Referee immediately stops play after it appears he hit his head. He seems fine now.

21:08 IST: 35' Free kick for Iran. Alireza Jahanbaksh steps up to take it from almost 40 yards. Not a very good one. The ball goes to the stands. Poor free kick.

21:03 IST: 31' Morocco's Amine Harit tries to curl it in but its too easy for the Iranian keeper.

21:00 IST: 30' Scramble for possession in the middle of the park for both the teams.

20:55 IST: 21' After dominating for the opening quarter, Iran went close to taking the lead. Attacking on the break, Iran number 10 Karim Ansarifard's attempt to pick out the man up in support is deflected out for a corner. Morocco survive.

20:52 IST: 18' Morocco players fail to put the ball into the net. A flurry of chances fell their way but Iranians were lucky to not have conceded from the set piece. Two efforts blocked by the goalkeeper. It is still goalless out there.

20:50 IST: 18' Morocco's El Hamadi is solid in midfield. He is building up play for his team. Iran are now getting their passes together but its still Morocco who look like breaking the deadlock.

20:44 IST: 14' Morocco have more than 80 per cent of the ball. They look confident here. Iran, on the other hand, look clueless. They cannot get the ball into the Moroccan half. They need to keep to ball and break Morocco's momentum.

20:36 IST: 4' Good link up play by Younes Belhanda for Morocco. Morocco are dominating proceedings early on against Iran.

20:34 IST: 3' Corner for Morocco. Good layoff but chance is spurned by Hakim Ziyech. Trivia! Morocco are 18 games unbeaten in all international games.

20:30 IST: Morocco have the best defensive record in the run up to the World Cup.

20:25 IST: Both teams are out in the middle with their respective national anthems being played.

20:16 IST: We are approaching the game now. Stay tuned for the live match updates.

Are you supporting #MAR? pic.twitter.com/hRkfB8Za97

Who's ready for Round 2? Just under one hour until we go again! #WorldCup #MARIRN pic.twitter.com/hvCV2V0Ar3

19:40 IST: The first match of the day say Uruguay beat Egypt 1-0 by a solitary goal scored by Jose Gimenez.

18:45 IST: Hello and welcome to the live match updates of the Group B match between Morocco and Iran.

Sardar Azmoun has been piling up the international goals for an Iran squad that has regularly superseded expectations.

With 23 international goals in just 32 games, the 23-year-old is already fifth on Iran's list of all-time leading scorers. Azmoun was a standout volleyball player as a teenager before concentrating solely on football, and uses his athleticism and acceleration to great effect. He was snapped up by Rubin Kazan in 2013 and while Arsenal and Liverpool have reportedly showed interest in the past, he remains in Russia.

A Dutch youth international, Hakim Ziyech ultimately elected to represent Morocco rather than the country of his birth in 2015. It was a decision blasted by Netherlands great Marco van Basten but one that helped Morocco end a 20-year World Cup absence. An attacking midfielder with the facility to penetrate the opposition, he is the fulcrum in an underrated Morocco side and has an eye for goal, finding the net eight times in 15 matches.

Two prolific seasons at Twente earned him a move to Ajax in 2016 but Ziyech is looking for a new challenge after landing the league's player of the year award and will be desperate to prove his value in Russia.

IR Iran Live Blogs Morocco vs IR Iran, Match 3 2018 FIFA World Cup Football Football Live Score
Get the latest updates on India vs Australia Series, check out the India vs Australia Schedule for 2020-21 and Ind vs Aus live score . Like us on Facebook or follow us on Twitter for more sports updates. You can also download the NDTV Cricket app for Android or iOS.