Zimbabwe batting fell apart against determined bowling as India take 1-0 lead in 2-T20I series. Here are the highlights from the match at Harare.

India delivered a comprehensive performance in the first of two T20Is against Zimbabwe in Harare. After Robin Uthappa's 35-ball 39 helped India post 178/7, spinners Axar Patel and Harbhajan Singh share five wickets to have Men in Blue win the match. (SCORECARD)

Axar is declared man of the match. What a day for the youngster.

1936 hrs: Out! The writing has been on the wall for some time now but Zimbabweans making absolutely no effort to wipe the words off. Mohot bowls a slower one and the ball crashes onto the stumps behind Cremer (9). Zimbabwe 98/7 (17.4).

1932 hrs: Out! Axar now has three. Raza tries to nudge the ball down the leg side but it comes to nothing more than a rattled stump behind him. Zimbabwe 90/6 after 16 overs.

1917 hrs: Out! Craig Ervine (2) falls to what is a sublime effort from Mohit Sharma. The batsman tries to steal a single but the fielder runs in from mid-wicket - one-handed pick and throw hits the stumps. Zimbabwe 82/5 after 13.4.

1907: Meanwhile, India 'A' and Rajasthan Royals' coach Rahul Dravid just broke his silence on the suspension of two IPL franchises. Here's what he had to say...

1903 IST: Out! Another Zimbabwean falls to a spinner. Harbhajan claims his second in two overs as Charles Coventry offers a simple catch to short midwicket. Zimbabwe 68/4 after 10.5 overs.

1900 hrs: Out! Axar is having a dream first over in T20I cricket. He picks his second in the same over. Chugumbura is bowled, falls for 1.

1857 hrs: Out! Mazakadza (28) departs. Gets under the ball for the sweep but finds the man at short fine leg Axar's spin getting the second wicket here.

1852 hrs: Out!Harbhajan gets the much-needed breakthrough. Chibhabha (23) steps out but fails to get the power behind the shot. Pandey takes a superb running catch down the ground.

1846 hrs:India in desperate need of a breakthrough as Mazakadza and Chibhabha have a mini duel for the biggest shot of the day. Even veteran Harbhajan Singh is not being shown much respect and has been smashed for 11 - including one six. Zimbabwe 49/0 after 7 overs.

1834 hrs: Aggressive start from the hosts. Sandeep's first delivery in T20I is smashed for a massive six. Three balls later, it is the same story.

1828 hrs: Zimbabwe openers Chamu Chibhabha and Hamilton Masakadza come out. The target is 179! 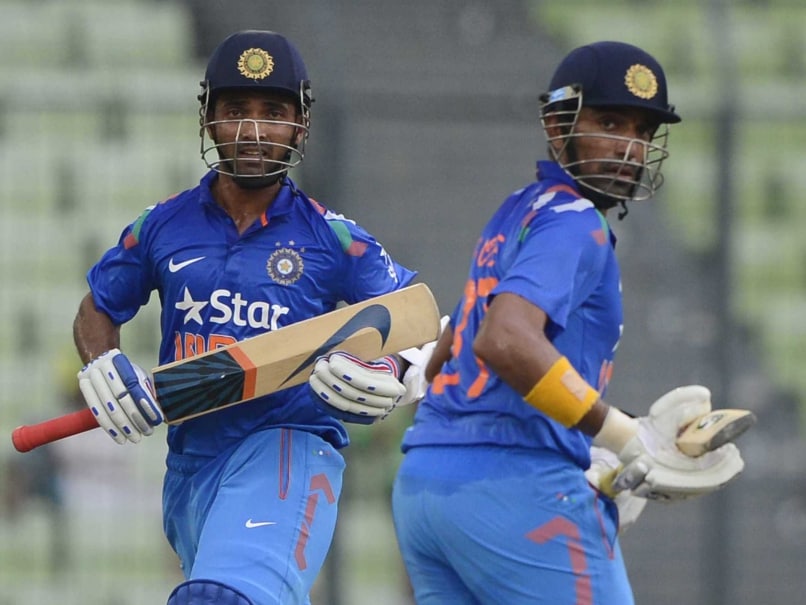 1734 hrs: The KKR duo seem content to take the singles for now. Uthappa has been looking to unorthodox shots to fetch him more runs but it hasn't quite clicked. Not yet anyway. Something's got to give though.

1723 hrs: Pandey shows early signs of aggression. He slaps Cremer for a mighty six over mid-wicket. What amazing power!

1720 hrs: Pandey has come out to partner Uthappa. He is on T20I debut. A few days back, he got his maiden ODI cap and had hit a fifty. Can he stage an encore in the shortest format of the game? 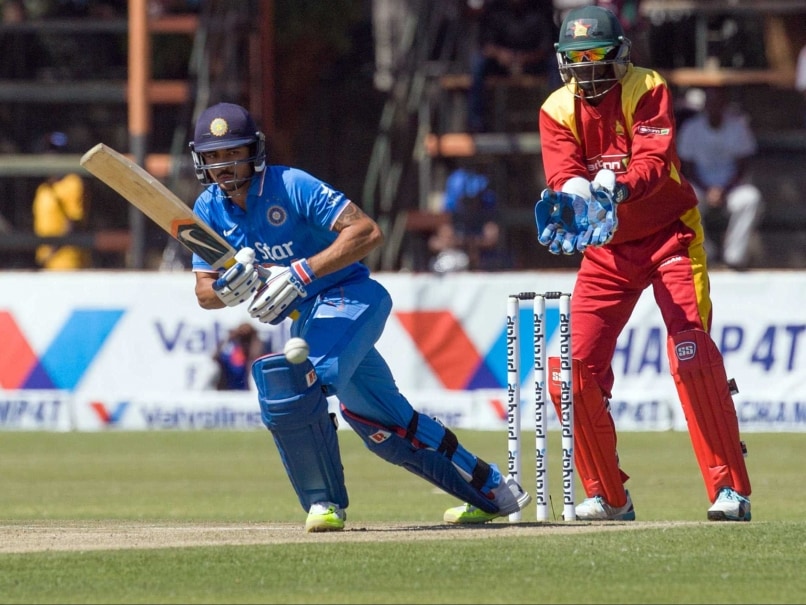 Manish Pandey scored 71 off 86 balls on his debut match.

1717 hrs: Out! Rahane tries to play the ball down the leg but Graeme Cremer flights the ball. Leading edge finds the man at point. India now 82/2 after 9.2 overs.

1703 hrs: Uthappa replaces Vijay in the middle. Another dangerous batsman, he has one fifty from 11 T20Is. He can bat at brisk pace and help India maintain the early momentum.

1700 hrs: Out! Vijay works the ball to the leg-side and marches for a quick single. He was guilty of ball-watching - a direct hit ends his watch. India 61/1 (7 overs).

1635 hrs: Chris Mpofu will take over from the other end. So, Zimbabwe opt to go for a spin-pace-spin attack early on. There's a slip in place for the bowler - a good attacking move early on.

1632 hrs: Match begins!Â  Zimbabwe begin with Propser Utseya's spin. Murali Vijay opens the innings with Rahane. A sedate start form them. It's 3/0 after the first.

For Zimbabwe, Â Taurai Muzarbani will make his debut in this match. He is also a fast-bowler and has 128 wickets from 58 first-class matches. The 28-year-old has also hit two fifties in the first-class format.

Did you know? Axar Patel, Stuart Binny, Kedar Jadhav and Manish Pandey are also playing their first T20 for the national team.

This match is the international debut of talented pacer Sandeep. A sensation in the 2014 edition of the Indian Premier League, the Punjab bowler claimed 18 wickets in that tournament. This year, the 22-year-old picked up 13 wickets in the tournament. He has also played 27 first-class matches and has 111 wickets to his name. 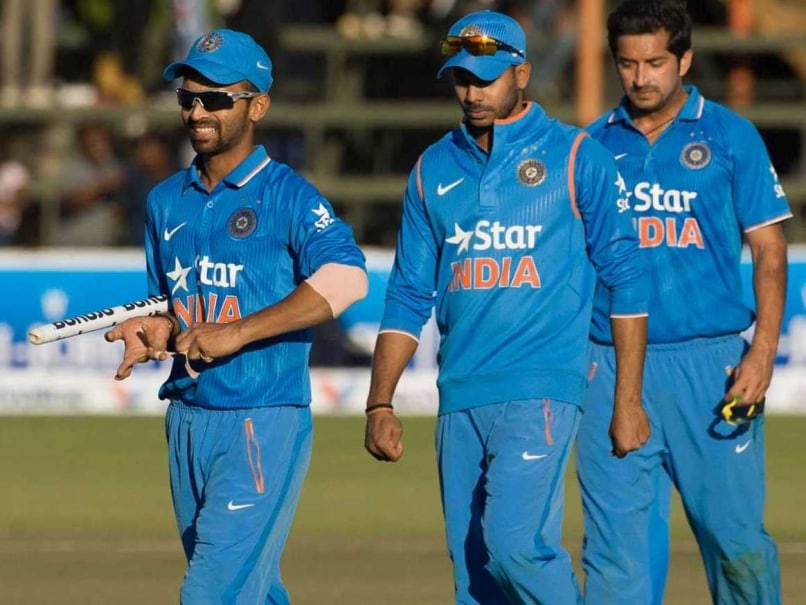 Can Ajinkya Rahane lead India to wins in T20s vs Zimbabwe too?

In the shortest format of the game, Zimbabwe can't be taken lightly. Individual performances can make a telling impact in T20 cricket and the Africans have a few players who can make a difference. India, of course, have a wealth of experience, thanks to IPL, but unlike the ODI series, the couple of T20s should be well contested.

Zimbabwe have won two of their last five T20 internationals. It may not be a great record but the Zimbabweans, if they field well, have the potential to take on any opposition. Sikandar Raza, Hamilton Masakadza and Charles Coventry are very suited to this brand of cricket and in a batsman's game, India must watch this troika. Coventry has a strike rate of 160-plus and he is the dangerman while Masakadza remains the pillar. He has played in every one of Zimbabwe's 33 Twenty20 internationals.

India captain Ajinkya Rahane believes the events back home will make no impact on his teammates. There are at least five players in the current squad, including Rahane himself, who don't know their IPL future after the RM Lodha panel, on Tuesday, slapped a two-year suspension on Chennai Super Kings and Rajasthan Royals for betting-related issues.

For Royals players Dhawal Kulkarni, Stuart Binny and Sanju Samson (who replaced the injured Ambati Rayudu and should play ahead of Robin Uthappa on Friday) this is a series to make an impression to the national selectors and IPL should not distract them. It's the same with Chennai Super Kings' Mohit Sharma. He will be better off concentrating on line and length.

India have won both their T20s against Zimbabwe by handsome margins. Both matches were played in 2010 and Suresh Raina was India's hero with a series average of 100.

Comments
Topics mentioned in this article
Ind in Zim, 2015 Zimbabwe Cricket Team India Cricket Team Ajinkya Rahane Live Cricket Score Live Score Cricket Harare Sports Club, Harare
Get the latest updates on ICC T20 Worldcup 2022, check out the Schedule and Live Score. Like us on Facebook or follow us on Twitter for more sports updates. You can also download the NDTV Cricket app for Android or iOS.