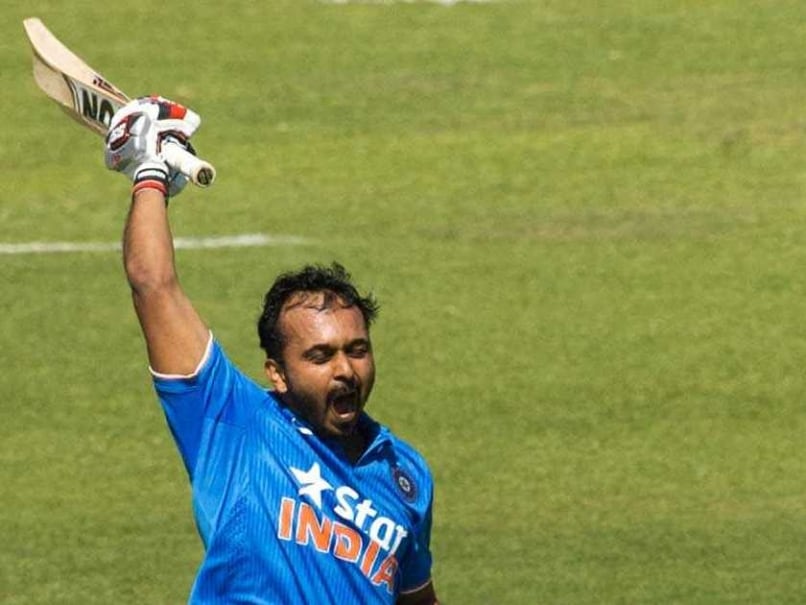 Kedar Jadhav celebrates his century in the 3rd ODI against Zimbabwe in Harare.© AFP

If the tour of Zimbabwe was an opportunity for India's fringe players, two young men have grabbed the opportunity with both hands. While Manish Pandey was impressive on his debut, Kedar Jadhav rode a huge slice of luck and came good with a century asIndia completed a 3-0 series win against the Africans. (Latest updates from the Zimbabwe vs India series)

The tour of Zimbabwe was God-sent for players like Jadhav, Pandey, Robin Uthappa and Manoj Tiwary. For batsmen like Murali Vijay, well established in the five-day format, this was an opportunity to prove that copybook cricket works well in shorter formats of the game.

When the squad for the Zimbabwean tour was picked by Sandeep Patil & Co., it was chosen keeping the World T20 in India next year in mind. Plus, India play several series at home and away in the next 18 months and hence it was necessary to have a productive bench as standby. Jadhav, Pandey and of course, Stuart Binny would have inspired the selectors and the senior team management. (Also read: Stuart Binny roars on African safari)

Jadhav was unimpressive in the first two ODIs in Zimbabwe - he scored all of 21 runs. He was lucky to make the third game on Tuesday. The 30-year-old from Pune, who is among the upstarts in IPL and has a healthy domestic batting average of 47-plus, rode a slice of luck and withstood pressure to score his maiden ODI ton in four matches. Jadhav made his ODI debut against Sri Lanka in Ranchi last November. He scored 20.

"I knew it would be challenging here, so I was prepared for that and I always knew it wouldn't be easy to score in every game. I told myself that whenever I get going, I will stay to the last and make sure that my team wins. I'm happy that today I've got in, settled and then carried through to the end," Jadhav said.

The Zimbabweans let Jadhav prosper. An umpiring decision went in favour of the Indian when he was not even in double digits and then on 41, Elton Chigumbura dropped a sitter at backward point. The No. 6 batsman shifted gears after his fifty. From 50 to 105 not out (12 x 4s, 1 x 6), Jadhav took just 23 balls. When the record books are opened for reference, the dropped catches or umpiring decisions won't count. The runs would.

"Whoever is the best, the selectors will pick. As far as this opportunity, Manish, me, Manoj and Robin got a good opportunity here. Luckily I converted into a hundred so I'm happy for myself," Jadhav said.

Like most Generation Next cricketers, Jadhav too knows how to celebrate a milestone. His Dabangg-style belt dance made for good pictures.

"Obviously I'm a big Salman Khan fan so I always dreamed of doing such things. This was the best occasion to let him know. It was from Dabangg the movie -- the title track." Imitating Bollywood is fine but serious cricket is no song and dance. Jadhav should know.

Comments
Topics mentioned in this article
India Cricket Team Zimbabwe Cricket Team Ind in Zim, 2015 Kedar Jadhav Stuart Binny Cricket
Get the latest updates on Fifa Worldcup 2022 and check out  Fifa World Cup Schedule, Stats and Live Cricket Score. Like us on Facebook or follow us on Twitter for more sports updates. You can also download the NDTV Cricket app for Android or iOS.