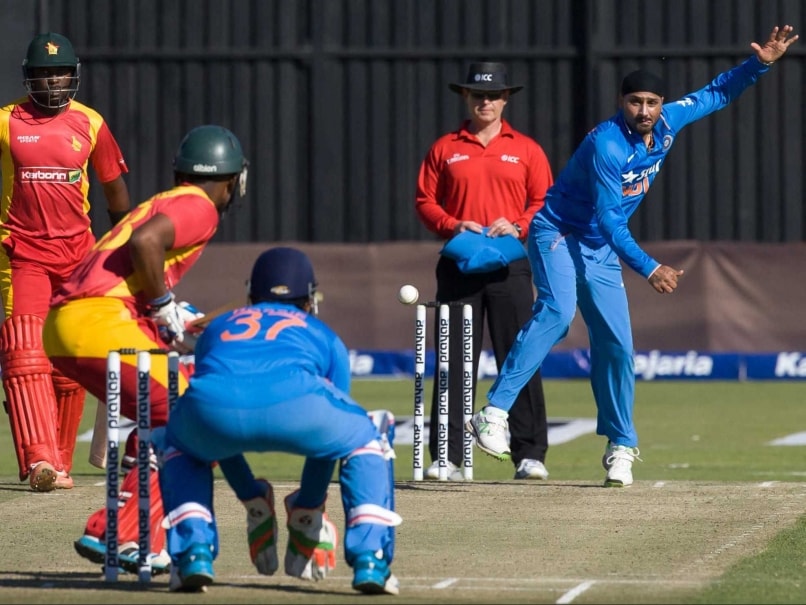 A fine collective effort helped India beat Zimbabwe by 54 runs in their first Twenty20 International of a two-match series at the Harare Sports Club here on Friday. (SCORECARD)

Set a target of 179, Zimbabwe could muster only 124/7, undone by the slow bowling pair of Axar Patel (3/17) and Harbhajan Singh (2/29), who derailed them after a promising start. (HIGHLIGHTS)

The hosts began their run chase on a sedate note. Openers Hamilton Masakadza and Chamu Chibhabha tried to play themselves in, with the intention of building up a partnership.

They showed no urgency and were happy scoring at six runs per over, reaching 38/0 in six overs.

They tried to force the pace from then on, with Masakadza lifting off-spinner Harbhajan Singh for a six over mid-wicket. Masakadza-Chibhabha took 12 runs off the veteran spinners's first over to kickstart their chase.

But Harbhajan came back strongly in his next over to send back Chibhabha (23 off 27 balls), inducing a mistimed lofted shot.

That triggered a slide, which saw Zimbabwe lose three wickets in the next two overs.

Left-arm tweaker Axar Patel accounted for Masakadza (28) and skipper Elton Chigumbura (1) within four balls. His good work was complemented by Harbhajan who claimed Charles Coventry (10) to reduce Zimbabwe to 68/4 in 10.5 overs.

From there on, it was a tall order for the hosts, one which proved insurmountable.

Earlier, experienced batsman-wicketkeeper Robin Uthappa played a responsible 35-ball 39-run knock to guide India to 178/5 after the visitors opted to bat after winning the toss.

India got off the blocks strongly with openers Ajinkya Rahane and Murali Vijay scoring at a fast clip.

Murali Vijay was the more aggressive of the two, hitting five boundaries and a six. But just when it seemed that India would run away with the proceedings, Vijay (34 off 19 balls) was run out in the seventh over.

Vijay's attempted quick singles brought out his downfall as he was undone by a smart direct throw from Sikandar Raja at mid-wicket.

His dismissal checked India's run-making spree, which was quickly dealt another blow when skipper Rahane (33 off 32 balls) departed 14 balls later. Rahane, deceived by a flighted leg-break from left-armer Graeme Cremer, scooped a leading edge to point, with the score at 82/2 in 9.2 overs.

Debutant Manish Pandey and seasoned Robin Uthappa were then saddled with the task of resurrecting India's innings.

They kept the scoreboard ticking, rotating the strike as well as hitting the odd big shot but, overall, Zimbabwe managed to check the run-flow. The Pandey-Uthappa duo took India to 123/2 in 15 overs and laid a platform for a late-innings assault.

But Pandey's attempt to up the ante ended in his departure, in the second ball of the 16th over, after walloping the previous ball to the boundary. He managed a run-a-ball 19.

The onus shifted to Uthappa, who responsibly stayed at the wicket till the end to guide the team to a decent score.

Right-arm medium-pacer Chris Mpofu was the most successful bowler for the home team, bagging three wickets for 33 runs in four overs.

Comments
Topics mentioned in this article
India Cricket Team Zimbabwe Cricket Team Akshar Patel Harbhajan Singh Ind in Zim, 2015 Cricket
Get the latest updates on SA vs IND 2021-22, check out the Schedule and Live Score . Like us on Facebook or follow us on Twitter for more sports updates. You can also download the NDTV Cricket app for Android or iOS.