Virat Kohli has so far scored 382 runs in six World Cup 2019 innings. He is behind Rohit Sharma (440), who is currently at the sixth spot in the list of highest run-getters in this World Cup. 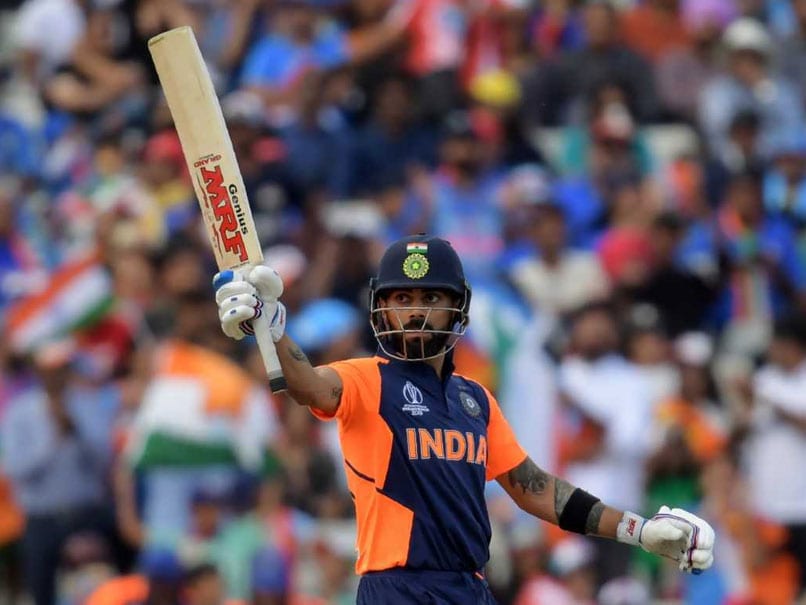 Virat Kohli became only the second player to hit five fifties in a row in World Cup cricket.© AFP

Indian skipper Virat Kohli on Sunday added another record to his name and joined Australian star batsman Steve Smith in an elite World Cup club. Kohli scored another half-century in the ongoing World Cup 2019 during his side's 31-run defeat at the hands of England at Edgbaston. With his fifth half-century on the trot in World Cup 2019, Virat Kohli became the second after Smith to score five consecutive half-centuries in a World Cup. Smith had scored five fifties consecutively in World Cup 2015 which Australia won by defeating New Zealand in the final. Before scoring 66 against England, Kohli had scored 72 against the West Indies, 67 (Afghanistan), 77 (Pakistan) and 82 (Australia).

With the feat, Kohli also became the first captain to score five consecutive fifties in a World Cup.

During the course of his inning on Sunday, the 30-year-old also went past Rahul Dravid to become the highest Indian run-getter in ODIs in England. Dravid had scored 1,238 runs in England.

Bangladesh's Shakib Al Hasan and Australia captain Aaron Finch are the two other players to pull off four straight 50+ scores in this edition of the World Cup.

Virat Kohli has so far scored 382 runs in the six innings he has played in the ongoing tournament. He is behind Rohit Sharma (440) who is currently at the sixth spot in the list of highest run-getters in this World Cup.

India are one win away from sealing their spot in the semi-finals. India will next play Bangladesh and Sri Lanka in their remaining fixtures in World Cup 2019.

India will lock horns with Bangladesh at Edgbaston on Tuesday.

Steve Smith World Cup 2019 England vs India, Match 38 Cricket
Get the latest updates on IPL 2021, check out the IPL 2021 Schedule and Indian Premier League Live Score . Like us on Facebook or follow us on Twitter for more sports updates. You can also download the NDTV Cricket app for Android or iOS.