South Africa have reached the semi-finals on four occasions 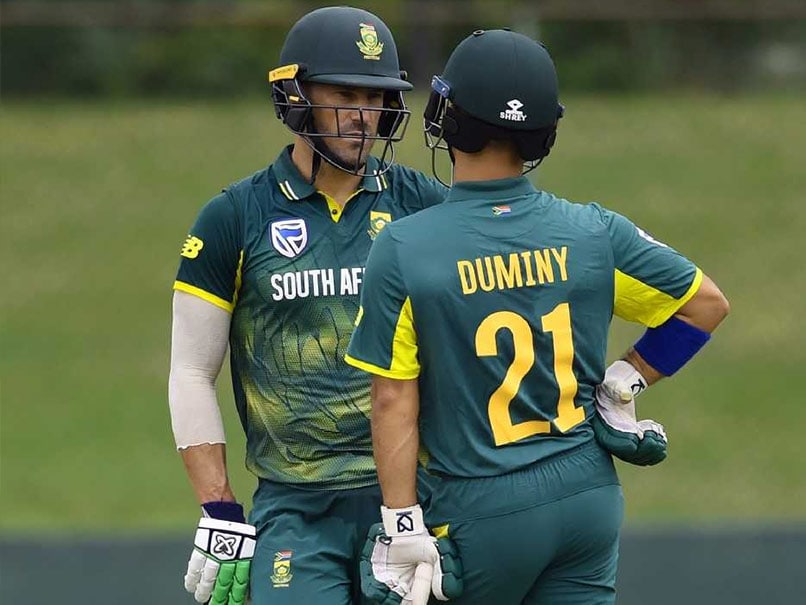 South Africa are a team who have everything it takes to win a World Cup.© AFP

South Africa are a team who have everything it takes to win a World Cup, barring the luck and often, the poise and presence of mind. They have had some terrible outings, not least the infamous rain-hit group tie with Sri Lanka at home in 2003, and have found themselves out of the running. After playing their first edition in 1992, South Africa have reached the semi-finals on four occasions - 1992, 1999, 2007, & 2015. They reached the quarter-finals in 1996 and 2011.

Wicket-keeper De Kock has been in blistering form for the past three years, scoring 1752 runs in 37 ODIs, striking at 99.01, with an average of 48.14. His highest score during this time was 168 not out off 145 balls against Bangladesh.

De Kock didn't have a brilliant 2015 World Cup, scoring 145 runs in eight matches. The only positive was his knock of 78 not out off 57 balls against Sri Lanka.

Van der Dussen made his ODI debut early this year against Pakistan and scored his best score of 93. Since then, he's been fabulous for the Proteas, having scored 353 runs in nine games at a brilliant average of 88.25.

The bowler made his debut against Ireland in September 2016. Since then, he has been an asset, with 54 wickets in 42 games with an economy rate of 5.62, his best ODI figures of 4-22 coming against Pakistan in January this year.

A veteran in this squad, Duminy hasn't been in great form in the past three years, with 666 runs in 32 games with an average of 28.86, with his highest score at this period being 92 off 70 balls against Sri Lanka.

Steyn hasn't played too many ODIs in the past three years due to numerous injury concerns, the number only being 13. Still he took 21 wickets with an economy rate of 5.13. His experience and his abilities still make him a valuable member of this squad.

Ever since taking 6-16 against Bangladesh in his debut ODI against Bangladesh, Rabada has been a revelation. He crossed 100 wickets in ODIs this year against Sri Lanka and with a slick economy rate of 4.98, he's going to be one of the players to watch in this World Cup.

Another revelatory figure in this squad, Ngidi has taken 34 wickets since his debut against India at February 2018. He has a very good economy of 5.33, with his best figures of 4-51 against India in only his 3rd ODI.

Chris Morris has not played in a one-day international since February 2018. Selection convener Linda Zondi had said Morris had always been in South Africa's plans despite only playing in Twenty20 games at international level in the past year.

An energetic character with an expansive celebration, Tahir has been brilliant for the Proteas, with 51 wickets in 34 ODIs in the last three years, with an economy of 4.52.

Since his debut in 2016 against Australia, Shamsi has been good for the Proteas in ODIs, taking 19 wickets in 15 games, with an economy of 5.3.

South Africa Cricket Team World Cup 2019 Cricket
Get the latest updates on Fifa Worldcup 2022 and check out  Fifa World Cup Schedule, Stats and Live Cricket Score. Like us on Facebook or follow us on Twitter for more sports updates. You can also download the NDTV Cricket app for Android or iOS.