Sri Lanka revived their World Cup 2019 campaign with a shock 20-run win over hosts England at Headingley on Friday. 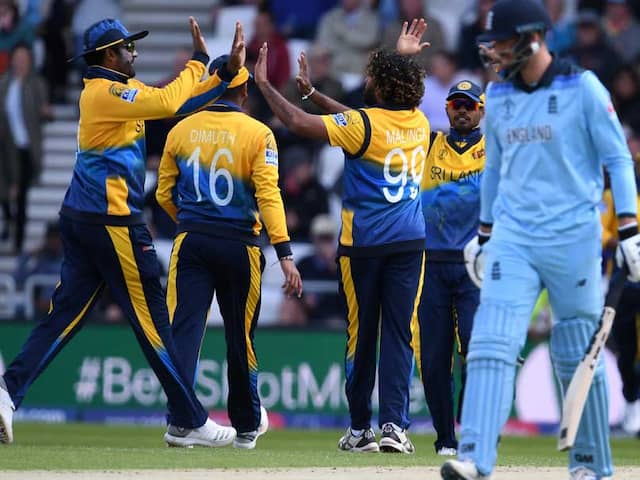 Sri Lankan streets were lit up with firecrackers after Dimuth Karunaratne-led team pulled off a shock 20-run win over hosts England at Headingley on Friday. After opting to bat, Sri Lanka rode on an 85-run knock (not out) by Angelo Mathews to score 232 for nine in 50 overs. Chasing a small total, England faltered against an age-defying fast bowler Lasith Malinga (4/43) and suffered their second defeat in six matches at the World Cup 2019. While residents across the island nation celebrated wildly, local media didn't fail to impress with pleasing headlines.

President Maithripala Sirisena welcomed the "competitive spirit" of the national team while Prime Minister Ranil Wickremesinghe was among the first to congratulate the team.

Sri Lanka captain Karunaratne praised Malinga and fellow veteran Mathews -- whose painstaking 85 not out helped them recover from a collapse to three for two.

Sri Lanka's 1996 World Cup winning skipper Arjuna Ranatunga said earlier in the week that Karunaratne and his team had improved during the current tournament.

"When we look at the team, they have improved a lot compared to where they were before the tournament.  Our weakness is the team management," Ranatunga said on Monday.

Last week, the team faced censure after failing to fulfil their media duties following the damaging defeat against Australia.

Karunaratne's side were beaten by 87 runs at the Oval, leaving their hopes of progressing to the semi-finals hanging by a slender thread.

Sri Lanka's refusal to meet the media came days after their team manager Asantha de Mel slammed the ICC's treatment of the squad.

De Mel blasted the quality of pitches, practice facilities, transport and accommodation at the World Cup.

"This is a World Cup where the top 10 countries are taking part and I feel that all the participants should be treated equally," de Mel was quoted as saying by Sri Lankan newspaper Daily News.

De Mel also criticised Sri Lanka's team bus -- saying it was more cramped than the double-decker vehicles provided to other teams -- blasted the net facilities at Cardiff as "unsatisfactory" and complained the squad's hotel in Bristol lacked a swimming pool.

Sri Lanka -- who have now beaten England in four successive World Cups -- next play South Africa in Durham a week on Friday and Malinga said: "We want to carry on the momentum and confidence into the other matches."

Angelo Mathews World Cup 2019 Cricket England vs Sri Lanka, Match 27
Get the latest updates on IPL 2020, check out the IPL Schedule for 2020 and Indian Premier League (IPL) Cricket live score . Like us on Facebook or follow us on Twitter for more sports updates. You can also download the NDTV Cricket app for Android or iOS.