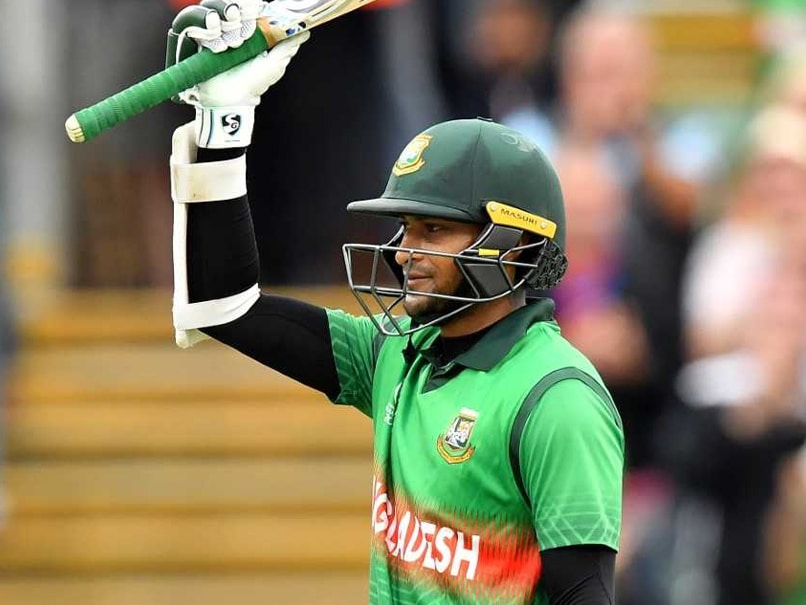 Bangladesh powered to the second highest run chase in World Cup history as Shakib Al Hasan's brilliant century clinched a remarkable seven-wicket win over the West Indies on Monday. Shakib blasted 124 from 99 balls and Linton Das hit a superb 94 from 69 deliveries to lead Bangladesh to 322-3 with 8.3 overs to spare at Taunton. Bangladesh's highest one-day international run chase put them behind only Ireland's 329-7 against England in 2011 in the history of successful World Cup chases.

Mashrafe Mortaza's side remain in with a chance of reaching the semi-finals after their second win in five matches.

It was a brutal day for the West Indies, who were shambolic in the field and bowled far too loosely.

A third defeat from their five games means a semi-final berth is extremely unlikely as the optimism from the thrashing of Pakistan in their opener fades away.

The highest chase in the current World Cup prior to the masterclass from Mashrafe's men was New Zealand's 248 against Bangladesh.

But the Tigers had already posted 330 in the first innings of their win over South Africa earlier in the competition and they were never intimidated by their task against the Windies.

Opener Tamim Iqbal set the tone in the chase with six fours in his 53-ball innings of 48 before being superbly run out by Sheldon Cottrell.

Tamim and Soumya Sarkar had taken the score to 50 in the ninth over.

Soumya was dismissed for 29 when he scooped Andre Russell to Chris Gayle in the slips.

But there were huge cheers from the Bangladesh fans around the ground when Shakib became just the second player to score 6,000 career ODI runs for the Tigers.

After reaching his fifth successive ODI 50, Shakib -- who scored 121 against England earlier in the tournament -- took command with a scintillating innings that climaxed when he stroked a boundary to reach his century.

Shakib is now the highest run scorer at this year's World Cup so far and the West Indies were helpless as he and Das demolished their wayward bowling to romp home.

Adding to the epic nature of the success, the unbroken stand of 189 between Shakib and Das was the second highest for the fourth wicket in World Cup history.

Earlier, Shai Hope's 96 and the joint-fastest fifty of the tournament from Shimron Hetmyer helped the West Indies reach 321-8.

The Windies couldn't be contained in the second half of the innings as Hope laid the foundations for his country's fourth highest World Cup score with a resolute 121-ball innings.

Hitting around Hope, Evin Lewis made 70 from 67 balls before Hetmyer smashed 50 in 26 balls, featuring four fours and three sixes.

It was the equal fastest 50 in this year's tournament and the third quickest by a West Indies batsman in World Cup history.

Lewis's partnership of 116 with Hope was the West Indies' first century stand of the World Cup.

A towering six from Nicholas Pooran off Mehidy Hasan Miraz left a hole in the roof of one of the Taunton stands.

And skipper Jason Holder's 33 from 15 balls -- including four fours and two sixes -- ensured the Windies went past 300.

But Shakib and Das showed that total was nowhere near enough with their sublime display.

County Ground Taunton World Cup 2019 Cricket
Get the latest updates on ICC T20 Worldcup 2022 and CWG 2022 check out the Schedule, Live Score and Medals Tally. Like us on Facebook or follow us on Twitter for more sports updates. You can also download the NDTV Cricket app for Android or iOS.