After India's 18-run defeat in Manchester, fans shared videos and pictures, pointing at an umpiring error in the most crucial stage of the match. 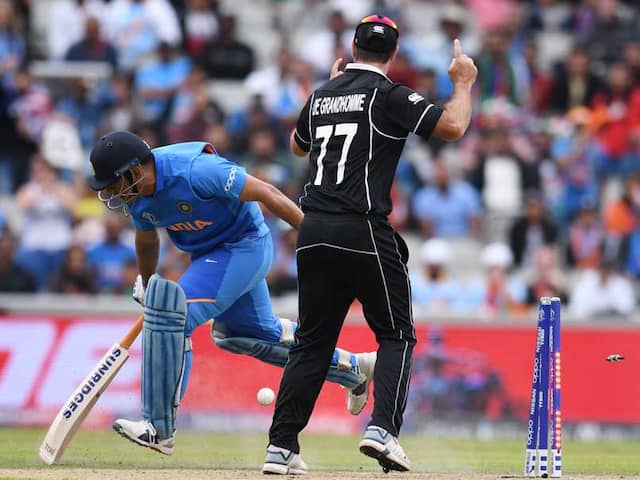 MS Dhoni's run-out was the turning point of the game.© AFP

MS Dhoni's dismissal was the turning point of India vs New Zealand semi-final clash in World Cup 2019. Dhoni got run out when he was about to change the gear with India needing 25 runs off the 10 deliveries at Old Trafford. Livid fans, however, blamed an umpiring error for his dismissal and questioned New Zealand's field placement. MS Dhoni was at the crease with ample expectations from Indian fans. Dhoni had done such jobs many times before and he had plans to execute this one too. The 49th over was on with Lockie Ferguson bowling.

After India's 18-run defeat in Manchester, fans shared videos and pictures, suggesting an umpiring error in the most crucial stage of the match. A debate was raised on the micro-blogging site regarding the legality of the ball on which MS Dhoni was out.

India fans shared videos and pictures of television screens just before that very ball on which Dhoni was dismissed. It showed that there were six New Zealand fielders outside the inner circle while only five fielders are allowed.

Check reactions of the fans over the controversy.

@bhogleharsha cleary martin guptil came running form the boundary .... it was a no ball... that part of the field had no fielders inside 30 yard... so 6 fielding outside 30 yards... #umpiring was #hopeless this #ICCCricketWorldCup2019

It's so pothetic #umpiring. They are representing India. Indians have faith in player but we are living in 21st century.Things are just on our finger tips and this kind of blunder mistake but we can undo the mistake. pic.twitter.com/YTDzWH9dfF

Take time and appreciate @ICC what an amazing #Umpiring in @cricketworldcup

Well Done ICC.
6 players outside the 30 yard circle and that was a legal delivery.
#SemiFinal1 #INDvNZL

Another evidence of poor #umpiring in the #CWC19
6 fielders outside 30 yards goes unnoticed at one of the crunch moments of #IndVsNewZealand
Would have been deciding.
What say? @ICC @cricketworldcup @BCCI @ICCMediaComms #CricketWorldCup #SemiFinal #ICCWorldCup2019 pic.twitter.com/dngauT0BUc

The run out would have been given even if umpires had called the no-ball but netizens claimed Dhoni's approach would have been different if he had known that it was a no-ball. The enraged fans came down heavily on umpires and New Zealand team using unethical ways to win games.

It was the third delivery of his over with MS Dhoni on the strike and Bhuveshwar Kumar at the other end when Dhoni gloved the ball towards short fine-leg. Having Bhuvneshwar on the other end, Dhoni wanted a strike and ran for the second run, and was found just short with Martin Guptill's rocket throw.

After the dismissal, India's World Cup dreams ended as the side was bowled out at 221 in 49.3 overs.

MS Dhoni World Cup 2019 India vs New Zealand, 1st Semi Final Cricket
Get the latest Cricket news, check out the India cricket schedule, Cricket live score . Like us on Facebook or follow us on Twitter for more sports updates. You can also download the NDTV Cricket app for Android or iOS.