MS Dhoni has had trouble with stumpings in World Cup 2019, having been dismissed in the same fashion against Afghanistan. 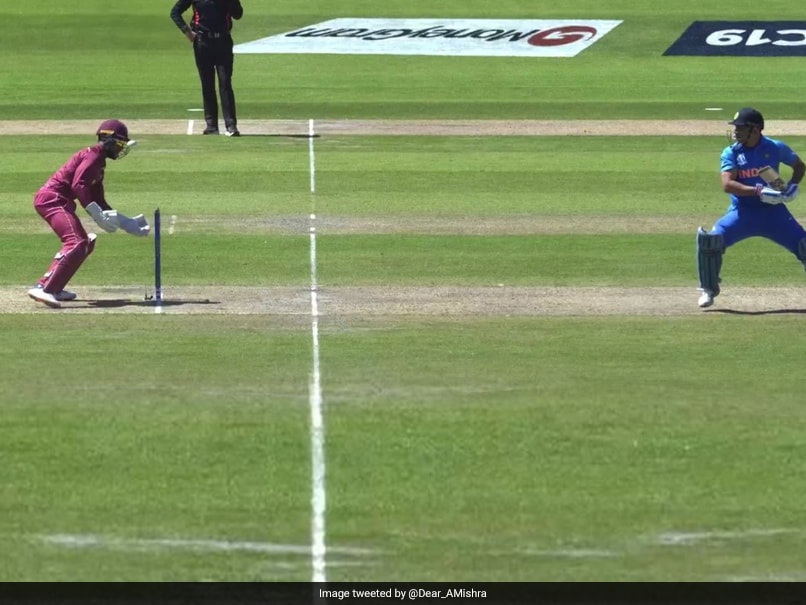 MS Dhoni came down the track to a Fabian Allen delivery.© Twitter

MS Dhoni should have been cooling his heels in the dressing room after scoring just eight runs during the West Indies vs India World Cup 2019 clash. But wicketkeeper Shai Hope was in a giving mood and Dhoni turned out to be the beneficiary of that. Batting on 8, MS Dhoni came down the track to a Fabian Allen delivery and missed it totally as the ball whizzed past the bat. Shai Hope had the simple task of collecting the ball and breaking the stumps but made a complete of hash of things despite having two bites at the cherry. With Dhoni miles out of his crease, Shai Hope, despite not collecting the ball cleanly in his first go, still had the opportunity to dismiss Dhoni but he yet again threw away the golden chance.

Here is a clip of the missed stumping opportunity that is going viral on social media:

The missed opportunity cost the West Indies dear as MS Dhoni went on to smash an unbeaten 56 off 61 balls to help India post 268 for seven in 50 overs.

Skipper Virat Kohli scored his fourth successive half-century at the World Cup to lay the foundations for India.

Kohli made 72 as he became the fastest batsman to reach 20,000 international runs in his 417th innings -- India's Sachin Tendulkar and Caribbean batsman Brian Lara both required 453 international innings to reach the landmark.

Dhoni and Hardik Pandya boosted the total, putting on 70 runs for the sixth wicket to punish the otherwise-disciplined bowlers in the last 10 overs.

Pandya hit 46 off 38 balls while Dhoni remained unbeaten on 56, ending the innings with a big six.

Shai Hope Cricket
Get the latest updates on India vs South Africa and check out  Schedule, Results and Live Score. Like us on Facebook or follow us on Twitter for more sports updates. You can also download the NDTV Cricket app for Android or iOS.