Shakib Al Hasan was left absolutely clueless as Jasprit Bumrah's delivery sneaked past the inside edge of the bat to shatter on to the stumps. 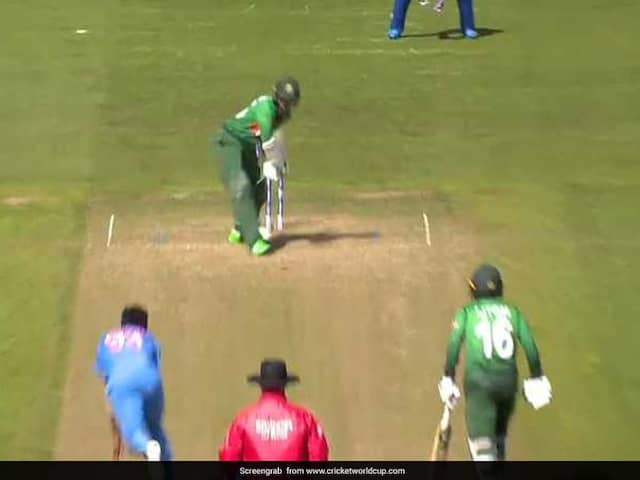 Jasprit Bumrah, Virat Kohli's go-to man, was once again at his imperious best as he claimed two wickets in five overs while conceding just 25 runs in India's second World Cup 2019 warm-up match against Bangladesh at Sophia Gardens in Cardiff on Tuesday. Although the spin duo of Kuldeep Yadav and Yuzvendra Chahal, who claimed three wickets each, hogged all the limelight, it was Jasprit Bumrah who laid the foundation for India's 95-run win. Bumrah removed opener Soumya Sarkar on the fourth delivery of the ninth over and made it two in two when he stunned Shakib Al Hasan with a brilliant 141 kmph yorker. Shakib Al Hasan was left absolutely clueless as Jasprit Bumrah's delivery sneaked past the inside edge of the bat to shatter on to the stumps.

What a delivery this was

Chasing 360 to win, Bangladesh began solidly, with Das and Sarkar rotating well to reach 49 with no loss, before Jasprit Bumrah (2/25) turned the screw.

India posted 359/7 in their final outing before the main tournament.

India will begin their campaign against South Africa on June 5 in Southampton.

Jasprit Bumrah World Cup 2019 Cricket
Get the latest Cricket news, check out the India cricket schedule, Cricket live score . Like us on Facebook or follow us on Twitter for more sports updates. You can also download the NDTV Cricket app for Android or iOS.