India vs New Zealand Semifinal Match: Rohit Sharma is in tremendous touch in World Cup 2019, having so far scored 647 runs from eight innings. 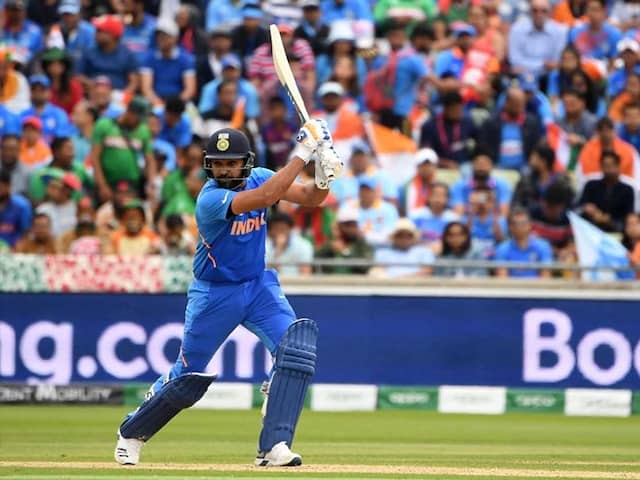 India head coach Ravi Shastri, ahead of the India vs New Zealand semi-final in World Cup 2019, heaped praise on India's star batsman Rohit Sharma, saying that he is one of the greatest One-day International (ODI) batsmen and has remained consistent for the side. Rohit Sharma has been in tremendous touch in World Cup 2019 so far scoring 647 runs from eight innings. India will lock horns with New Zealand in the first semi-final of World Cup 2019 at Old Trafford in Manchester on Tuesday. The league stage match between India and New Zealand in Nottingham was abandoned due to rain.

In a video posted by the International Cricket Council (ICC) on Twitter, Shastri praised Rohit and other Indian players for their brilliant performance in the tournament.

"I thought god was in England's dressing room that day. Hope if we play England next, he sits in ours."#TeamIndia coach Ravi Shastri talks through each of India's #CWC19 matches before the crunch semi-final clash against New Zealand. pic.twitter.com/I1HCDzfpPo

Rohit Sharma is the only batsman who has scored five centuries in a World Cup. He has broken Sri Lanka's Kumar Sangakkara's record (four in 2015) for scoring the most centuries in a single edition of the World Cup. Sharma has been providing a steady start to the Indian innings and he has the ability to accelerate when required.

"He is one of the greatest ODI players. Just seeing his records over the year, three double hundreds in ODI, no one has done that and he has been really consistent for India," Shastri said.

Shastri further praised India bowlers for their spirited performance in the World Cup so far. He complimented Mohammad Shami's bowling spell against Afghanistan where he clinched a hat-trick.

"Chahal has got a great temperament as he attacks the batsmen and looks for a wicket, that was the need of the hour. The team that improved like hell, Afghanistan. The match went down to the wire and you needed something special and Shami delivered for us," he said.

Speaking about the need to have good bowlers, he said, "In this format of the game, we got to have good death bowlers who can take wickets and restrict the opponent, and in Jasprit Bumrah and Bhuvneshwar Kumar we got two good ones," he added.

Shastri hailed all-rounder Hardik Pandya and said he is one who can bat and can also deliver 10 overs when required.

"He has come along as a bowler, we are getting full 10 overs out of him. He reads the condition well, knows where to use the off-cutters and the slow bouncers. So, his reading of the game is good which is a massive help for the side when you have the batsman as flamboyant as him who can also bowl," Shastri said.

He concluded and said their job was to get out and perform as an individual and as a team.

"I thought God was in England's dressing room that day. Hope if we play England next, he sits in ours. Nothing else to worry about. Our job is to get out there and do our job, as an individual and as a team," he said.